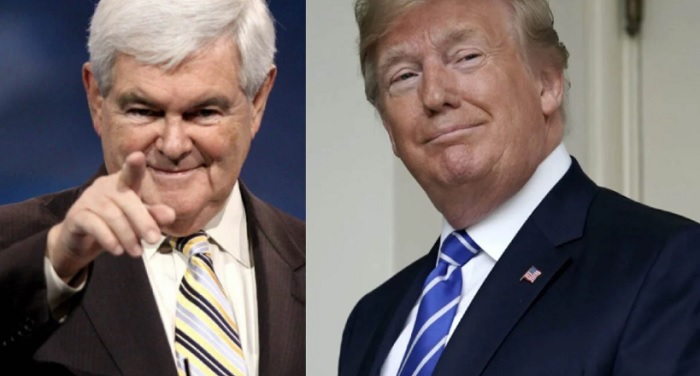 Trump is really coming back with a vengeance, folks.

He’s not just setting his sights on running again in 2024, but he’s also got something major in the works for the Republican party that will set the party on a whole new path.

And man-oh-man, will the RINOs be furious – which is exactly what we want.

According to reports, Trump is teaming up with Newt Gingrich to start a new project called “Contract With America” which is focused on a grassroots campaign to help snuff out the left’s recent efforts to dominate small local elections and will focus on 2022 and beyond.

This is exactly what we need.

The project will be pushing a big “America first” message that’ll really zero in on policies that help enrich this country, like eliminating critical race theory, immigration, trade, and school choice.

“Contract for America” is actually a reboot of a project that Gingrich first presented in 1994, which helped Republicans take over both the House and the Senate.

Let’s pray this has the same success because we need it badly.

Trump 2024, and a new voting integrity organization for normal citizens to police and protect against fraudulent votes.

We need volunteers to waylay the Zucker troops as they go buy black votes in 2024.

If you can’t get off your butt to vote, you don’t get to vote.

We shouldn’t make it easy when on side promises things they can’t/never deliver, and the other side is promoting personal responsibility.

Even if those Biden votes were legit (and they weren’t), at least half of them were made by people who shouldn’t be allowed to vote at all.

If Democrats are allowed to rape election integrity as they want with HR1, the nation is done.

Newt was the only GOOD SPEAKER IN MY LIFE. I read and understood the liberal W Post in 1950.
The 3 liberal “Republicans” since Newt were liars and crooks! Had they had any morals; they’d said “I’m a Dem in disguise.”! All 3 are, and have always been, bereft of morals. The first so degenerate he has spent years in “The Grey Bar Hotel” at my expense.

I have a lot of respect for Gingrich. He was my choice in 2012 and would have conducted a much better campaign than Romney. He certainly would have let “Too Much” Candy Crowley get away with her assistance of Obama during that debate. Like Trump, Gingrich doesn’t mince words, pull punches or grovel to the leftist media that, no matter what, is going to hate and attack Republicans.

This is what Trump tried to turn the Republican party around to; serving America and the American people. Democrats and Republicrats have fought tooth and nail to preserve the establishment which serves the politicians, not the citizens. Gingrich and Trump should make a good team.

Is Newt not the hypocrite who pushed for the impeachment of Bill Clinton for lying about an extramarital affair, while he himself was conducting an adulterous relationship with a congressional employee 23 years his junior?

His plan to destroy Clinton by way of entrapment backfired. Clinton’s popularity subsequently increased, Newt’s plummeted, and republicans lost five seats in the House rather than picking up six as Newt predicted. That, together with an official congressional reprimand for one of several ethics violations, prompted his resignation as Speaker of the House before they could kick him out, and then his resignation from his Congressional seat.

So now he’s teaming up with Trump? Birds of a feather, I suppose…

Clinton lied under oath before a Grand Jury. Commonly called perjury and it IS an actual “high crime and misdemeanor” qualifier, as opposed to taking a crime committed by Democrats and pretending Trump committed it for impeachment. Nothing hypocritical about Gingrich whatsoever.

Clinton was and remains a scumbag, married to a criminal.

Greg, you dumb shit! Bill was impeached fo White water! He lied about her after the Impeachment was almost done!

Maybe you are not dumb. You may be a GWB “Republican”! Which is it?

Wouldn’t you prefer to be on the patriotism side instead of the socialist, totalitarian police state Democrat side?