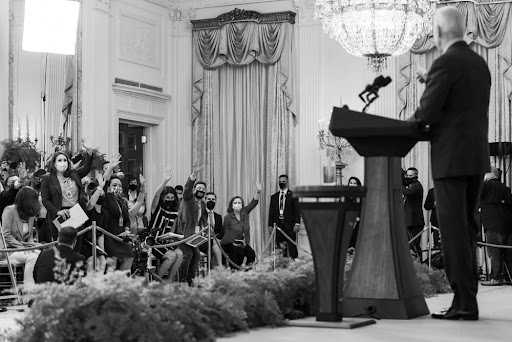 The Biden administration and the corporate media’s lies about the border are collapsing and neither institution is prepared to do damage control.

While the White House frantically repeats lies about the administration’s handling of the border — including that officials are expelling migrants under Title 42, even though federal authorities are releasing thousands of illegal aliens into the U.S. — even Politico admits that “Everyone’s mad at Biden over migration.”

For months, Republicans have called out the Biden administration’s incompetence at the border. Just this week, 26 Republican governors begged Biden to “take action to protect America, restore security, and end the crisis now.” But even more telling than the GOP’s cries for action is the lack of approval from U.S. adults on President Joe Biden’s immigration policy. In a mid-September Reuters/Ipsos poll, only 38 percent of those surveyed said they approved of Biden’s handling of the border crisis his administration created and exacerbated.

While the White House does damage control and tries to win back public approval points by claiming that the administration is using Title 42 to deal with an influx of illegal aliens in Del Rio, Texas, it’s also fighting off the increasingly progressive sect of congressional Democrats who are demanding the administration “immediately put a stop” to deportations.

“Right now, I’m told there are four flights scheduled to deport these asylum-seekers back to a country that cannot receive them. Such a decision defies common sense. It also defies common decency and what America is all about,” Senate Majority Leader Chuck Schumer told his congressional colleagues on Tuesday.

Schumer did not hold back any criticism from the administration for keeping what he called a “hateful and xenophobic” product of former President Donald Trump.

Even Biden’s corporate media allies who go to great lengths to cover up his other failures are noting the White House’s inability to fully address the humanitarian and political sides of this crisis. MSNBC anchor Stephanie Ruhle condemned Vice President Kamala Harris, who Biden appointed to address the “root cause” of illegal migration to the U.S., this week for ignoring the mounting problems in Del Rio.

“How about the message from our vice president, where is she? She was supposed to be in charge of all of these migration issues, going to those Northern Triangle countries that’s obviously not Haiti, that was one of her first international trips with the message do not come here illegally,” Ruhle said on MSNBC. “People aren’t listening. What is she saying now?”