The Histrionics and Melodrama Around 1/6 Are Laughable, but They Serve Several Key Purposes 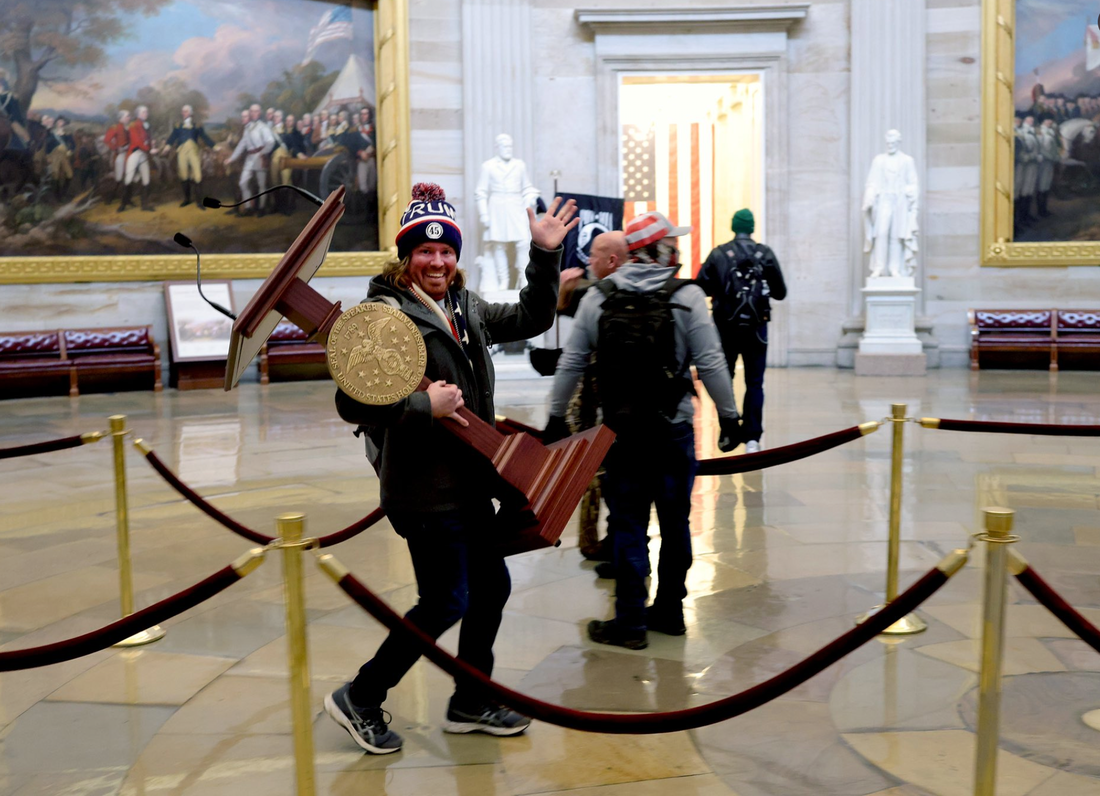 The number of people killed by pro-Trump supporters at the January 6 Capitol riot is equal to the number of pro-Trump supporters who brandished guns or knives inside the Capitol. That is the same number as the total of Americans who — after a full year of a Democrat-led DOJ conducting what is heralded as “the most expansive federal law enforcement investigation in US history” — have been charged with inciting insurrection, sedition, treason or conspiracy to overthrow the government as a result of that riot one year ago. Coincidentally, it is the same number as Americans who ended up being criminally charged by the Mueller probe of conspiring with Russia over the 2016 election, and the number of wounds — grave or light — which AOC, who finally emerged at night to assure an on-edge nation that she was “okay” while waiting in an office building away from the riot at the rotunda, sustained on that solemn day.

That number is zero. But just as these rather crucial facts do not prevent the dominant wing of the U.S. corporate media and Democratic Party leaders from continuing to insist that Donald Trump’s 2016 election victory was illegitimate due to his collusion with the Kremlin, it also does not prevent January 6 from being widely described in those same circles as an Insurrection, an attempted coup, an event as traumatizing as Pearl Harbor (2,403 dead) or the 9/11 attack (2,977 dead), and as the gravest attack on American democracy since the mid-19th Century Civil War (750,000 dead). The Huffington Post’s White House reporter S.V. Date said that it was wrong to compare 1/6 to 9/11, because the former — the three-hour riot at the Capitol — was “1,000 percent worse.”

Indeed, when it comes to melodrama, histrionics, and exploitation of fear levels from the 1/6 riot, there has never been any apparent limit. And today — the one-year anniversary of that three-hour riot — there is no apparent end in sight. Too many political and media elites are far too vested in this maximalist narrative for them to relinquish it voluntarily.

The orgy of psychodrama today was so much worse and more pathetic than I expected — and I expected it to be extremely bad and pathetic. “House Democrats [waited] their turn on the House floor to talk to Dick Cheney as a beacon for American democracy,” reported CNN’s Edward-Isaac Dovere; “One by one, Democrats are coming over to introduce themselves to former VP Dick Cheney and shake his hand,” added ABC News’ Ben Siegel. Nancy Pelosi gravely introduced Lin-Manuel Miranda and the cast of Hamilton to sermonize and sing about the importance of American democracy. The Huffington Post‘s senior politics reporter Igor Bobic unironically expressed gratitude for “the four legged emotional support professionals roaming the Capitol this week, helping officers, staffers, and reporters alike” — meaning therapy dogs. Yesterday, CNN’s Kaise Hunt announced: “Tomorrow is going to be a tough one for those of us who were there or had loved ones in the building. Thinking of all of you and finding strength knowing I’m not alone in this.” Unsurprisingly but still repellently: Kamala Harris today compared 1/6 to 9/11.

That the January 6 riot was some sort of serious attempted insurrection or “coup” was laughable from the start, and has become even more preposterous with the passage of time and the emergence of more facts. The United States is the most armed, militarized and powerful regime in the history of humanity. The idea that a thousand or so Trump supporters, largely composed of Gen X and Boomers, who had been locked in their homes during a pandemic — three of whom were so physically infirm that they dropped dead from the stress — posed anything approaching a serious threat to “overthrow” the federal government of the United States of America is such a self-evidently ludicrous assertion that any healthy political culture would instantly expel someone suggesting it with a straight face.

Putting the events of January 6 into their proper perspective is not to dismiss the fact that it was a lamentable event — any more than opposing the exploitation of 9/11 and exaggeration of the domestic threat of Muslim extremism, which I spent a full decade doing, meant that one was denying the heinousness of that attack. The day after the 1/6 riot, I wrote in this space that “the introduction of physical force into political protest is always lamentable, usually dangerous, and, except in the rarest of circumstances that are plainly inapplicable here, unjustifiable.” I still believe that to be the case. There was nothing virtuous about the 1/6 riot.

But it is typically the case that fear-mongering and deliberate exaggeration of threats has an element of truth to them. Al Qaeda and ISIS really did want to carry out mass-casualty events on U.S. soil. COVID is a fatal virus that can kill people and has done so around the world. There are right-wing extremists in the U.S. bent on using violence to advance their political agenda, just as there are left-wing extremists and anarchist insurrectionary movements and many other types eager to do the same (more destruction was caused by the latter than the former over the last two years, to say nothing of the dozens of journalists physically assaulted by individuals participating in Antifa protests).

Far too many centers of political and economic power benefit from an exaggerated and even false narrative about January 6 to expect it ever to end.

The Democratic Party, eager to cling to their majoritarian control of the White House and both houses of Congress, knows it has no political program that is appealing and thus hopes that this concocted drama will help them win — just as they foolishly believed about Russiagate. With the threat of Al Qaeda and ISIS faded if not gone, and the attempt to scare Americans over Putin a failure, the U.S. security state, always in need of a scary enemy, has settled on the claim that right-wing “domestic extremists” are the greatest threat to U.S national security; though they claimed this before 1/6, casting 1/6 as an insurrection allows them to classify an entire domestic political movement as an insurrectionary criminal group and thus justify greater spying powers and budgetary authorities.

CNN proudly announced that the most-watched day in the history of their network was 1/6. The dirty little secret of the liberal wing of the corporate media is that nobody benefited more from the Trump campaign, his presidency and its aftermath than they, and they are desperate to rejuvenate it and re-discover that glory. Meanwhile, coddled journalists who have never broken meaningful stories have finally found a way to claim that they stared down dangerous and risky situations — as if they spent years in the middle of an active war zone or were persecuted and prosecuted by a corrupt and authoritarian state for their intrepid reporting — and have converted Brian Stelter’s CNN show into a virtual therapists’s couch where they all get to go and talk about how they are still coping with the deep trauma of spending a few hours in the Capitol last year.

The pettiness and absurdity of this Democrat/media narrative, laughable as it often is, does not mean it is free of danger. Asserting that the U.S. suffered an attempted coup by a still-vibrant armed faction of insurrectionists is a self-evidently inflammatory claim. It has been used to allocate billions more to the Capitol Police and to radically expand their powers; justify the increased domestic use of FBI tactics including monitoring and infiltration; and agitate for the mass imprisonment of political adversaries, including elected members of Congress. Hapless defendants who are not even accused of using violence have been held in harsh solitary confinement for close to a year, then sentenced to years in prison — while self-styled criminal justice reform advocates say nothing or, even worse, cheer. If one genuinely believes that the U.S. came close to a violent overthrow of American democracy and still faces the risk of an insurrection, then it is rational to sanction radical acts by the U.S. security state that, in more peaceful and normal times, would be unthinkable.

Where is this “insurrection”? What happened to it? Where did it go? The January 6 protest barely lasted four hours until it was easily subdued. Copying the Bush/Cheney model of keeping fear levels high by constantly issuing vague warnings of looming violence and doom, the Department of Homeland Security issued at least six separate “heightened threat” warnings last year, not a single one of which materialized. There were no violent protests in Washington, D.C. or in state capitols on Inauguration Day; no violent protests materialized the week after Biden’s inauguration; no violent protest erupted once COVID lockdowns were eased due to social media provocations; none happened on the 20th anniversary of the 9/11 attack; there was no right-wing violence perpetrated in connection with the commemoration of the 100th year anniversary of the Tulsa massacre. Each time such a warning was issued, cable outlets and liberal newspapers breathlessly reported them, ensuring fear levels remained high.

What is really going on here is as tawdry as it is obvious. Democrats have no governing program on which they can run and win. The complete collapse of the party was temporarily obscured by the once-in-a-generation talent in Barack Obama and the very narrow win in 2020 of a banal, empty septuagenarian, thanks to the incumbent-killing double crisis of a devastating pandemic and economic shutdown. But the edifice of this party collapsed under Obama — “the Whole Democratic Party is Now a Smoking Pile of Rubble,” warned supreme Democratic partisan Matt Yglesias at Vox in 2016 — and it is collapsing once again under Biden. Its only ideologies — neoliberalism, corporatism, militarism — are widely despised failures, but they are imprisoned by their donor base from offering anything else.

A party that does not believe it can win politically often tries to criminalize its adversaries. That is what Democrats did during the Trump years: focused not on defeating his legislative agenda but obsessing on the fantasy that FBI Superman Robert Mueller was going to come and round up Trump and his family members and associates and haul them off to prison. The Democrats’ beloved former CIA Director, NBC News star John Brennan, all but promised that was going to happen two weeks before Robert Mueller closed his investigation by announcing he found no evidence to establish the core crime of conspiring with Russia.

The entire committee of 9 angry democrats is laughable.

What is really going on here is as tawdry as it is obvious. Democrats have no governing program on which they can run and win.

What else do Democrats have? What are they going to do, run on their record? This is how power is maintained in N. Korea; the constant and imaginary threat of attack is maintained as an excuse for the existence of a totalitarian police state.