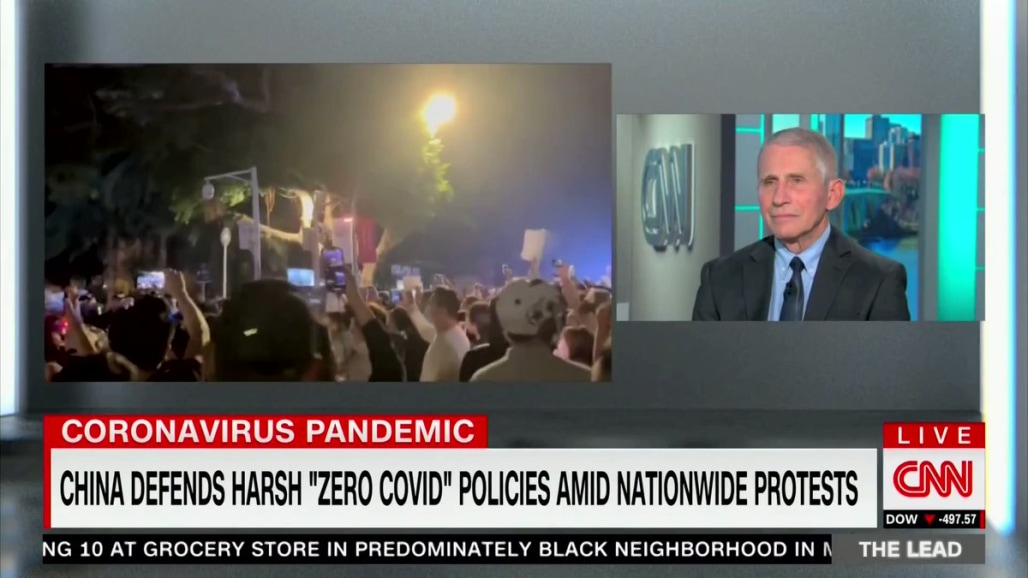 Across the political spectrum, voices have risen up in support of the Chinese people who’ve launched protests of unprecedented scale against the Chinese Communist Party’s indefinite Covid lockdown measures.

As well they should. Even by Chinese standards, the lockdowns that Xi Jinping pioneered with the onset of Covid are horrific in terms of their scale, their duration, their depravity, and the new totalitarian surveillance measures to which they’ve led. Anyone who participates in a protest in China runs a risk of being subject to cruel and arbitrary punishment. For ordinary Chinese people to brave that risk in defiance of this new form of inhuman medical tyranny is an act of courage worthy of admiration.

There are notable exceptions to the otherwise widespread support the protesters have received. Apple has been silent about the protests, and had the gall to limit the protesters’ use of a communication service called AirDrop in compliance with the CCP’s demands, even as it threatens to remove Twitter from its app store over Elon Musk’s free speech policy. This comes even after Apple has long ignored requests by FCC officials to remove the Chinese-owned app TikTok from its app store over unprecedented national security concerns. So Apple complies with requests by the Chinese government, but not the United States government. Let that sink in…

Apple is, unfortunately, far from alone in its CCP apologism. Anthony Fauci told CNN that China’s totalitarian lockdowns would be fully justified so long as the purpose was to “get all the people vaccinated.”

Amid protests of unprecedented scale, Fauci tells CNN that China’s totalitarian Covid lockdowns would be fully justified so long as the purpose was to “get all the people vaccinated.”

This kind of apologism for the CCP’s grisly bastardization of “public health,” is horrific, especially coming from the man most widely seen as the leader of America’s response to Covid.

In 2020, the New York Times denounced anti-lockdown protesters as “Anti-Vaxxers, Anticapitalists, Neo-Nazis,” and urged the United States to be more like China.

But in 2022, the New York Times admired the bravery of China’s anti-lockdown protesters fighting Xi Jinping’s “unbending approach to the pandemic” that has “hurt businesses and strangled growth.”

In 2020, CNN published an open letter from “over 1,000 health professionals” denouncing anti-lockdown protests as “rooted in white nationalism,” while admiring “China’s Covid success compared to Europe.”

But in 2022, CNN admired China’s anti-lockdown protesters as “young people” who “cry for freedom”

In 2020, the Washington Post denounced anti-lockdown protesters as “angry” populists who “deeply distrust elites,” and wished the United States was more like China.

But in 2022, the Washington Post celebrated global “demonstrations of solidarity” with China’s anti-lockdown protests.

In 2020, the New Yorker denounced anti-lockdown protesters as “militias against masks,” while marveling at how “China controlled the coronavirus.”

But in 2022, the New Yorker admired the protesters standing up to Xi Jinping.

Earlier this year, Amnesty International issued a statement of concern about Canada’s anti-lockdown Freedom Convoy protests being affiliated with “overtly racist, white supremacist groups,” even as Justin Trudeau invoked the Emergencies Act to crush the protests.

But now, Amnesty International has issued a statement urging the Chinese government not to detain peaceful protesters.

These headlines are, of course, in addition to the hundreds of other commentators, influencers, and health officials, such as NYT journalist Zeynep Tufekci, who used their platforms in 2020 to urge for lockdowns that were even stricter than those their governments imposed, but now join in support for those in China protesting the same policies they were urging their own countries to emulate.

Etymologically, Zeynep’s latter comment makes no sense. Lockdowns had no history in western public health policy and weren’t part of any democratic country’s pandemic plan prior to Xi Jinping’s lockdown of Wuhan in 2020. Though some countries, such as Italy, imposed lockdowns shortly before the United States, their officials too had simply taken the policy from China. Thus, because no other precedent existed, any call for a “real lockdown” or a “full lockdown” in spring 2020 was inherently a call for a Chinese-style lockdown

I guess it simply depends on the topic being covered in a massive protest for the left to either support or denounce it. If people are protesting ineffective policies and being locked into their own homes indefinitely (and sometimes burn to death in them) and opposing government totalitarian oppression, then it is BAAAAAAD. But, if the protests are violent, destructive, deadly and in support of racism and destroying lawful police authority, then it is GOOOOOOOOOOOOD.

Also, viruses are intelligent enough to know not to jump from person to person during a “GOOD” protest/riot/pogrom. But, when they detect the “BAD” protest, they join together in an existential destructive event.

Democrats here are watching the CCP and salivating; if they could, if they had been able to enact enough “common sense gun control”, they could have the same power. They could tamp down rallies for candidates they don’t like or protests against totalitarian overreach. But, alas, the 2nd Amendment (and, though bruised and beaten, the 1st Amendment) still stands. And Democrats are just sick about it.