The First Rule of Gay Club Is You DO NOT Talk About Gay Club! Groomer Teachers Plot on Zoom 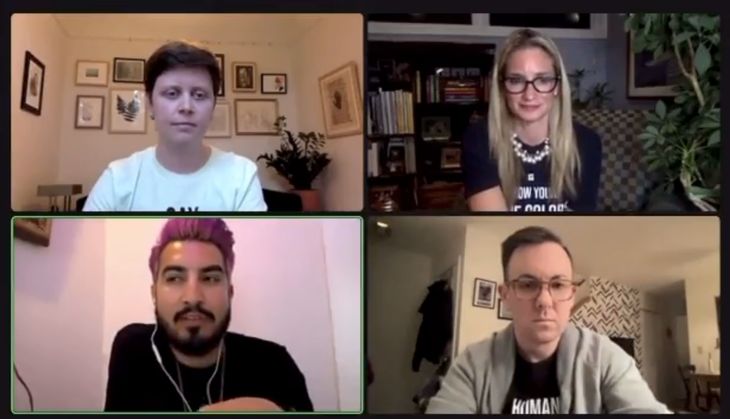 The groomer teachers just will not stop trying to indoctrinate your kids into the rainbow cult behind your back. It’s amazing to me that they object to the term “groomer” and then actively plot to have secrets with children about sexuality. It is the definition of “grooming.” Christina Buttons, who calls herself a “reformed SJW,” has footage of a leaked Zoom call between teachers that was organized by GenderInClassrooms.com. This website purports to be “created by teachers for teachers” and “dedicated to equipping educators with the tools they need to foster safe, welcoming gender-inclusive classrooms.”

One of the things that the Gender Woo-Woo cult likes to do is create Gay/Straight Alliance clubs in school that sound like support groups but are actually Gender Woo-Woo indoctrination clubs. This is where kids will be told that girls can be boys, pronouns like “fish-self” are valid identities, and genital mutilation surgery and drugs are the answer to gender dysphoria. And they know they’re being deceptive because they say it outright. In the following clip, the website’s co-founder Kieren Slattery says, “Something I do say to students and caregivers, though I mostly say it to students … I don’t ever tell anyone else who came [to gay club], so I would never tell their adults or other students in the school or even other teachers.”

I went undercover ops in a webinar meant to instruct other teachers on how to implement gender ideology to elementary school students through GSA (Gender and Sexuality) clubs held during school hours. 1/ pic.twitter.com/Dk69PB74y6

“Kieren’s” voice, which I first thought was augmented or sped up, is the dead giveaway. Though Kieren goes by “he/him” according to “he/his” bio, I’m reasonably certain he/him is a she/her. Because of that, I won’t be calling he/him by preferred pronouns. Especially when Kieren’s goal is to teach other teachers how to hide important information about children from their parents. Fight me.

The second clip shows the pink-haired fella discussing how he hides his gay club from parents. “The only formal communication that we’ve sent home was to 4th- and 5th-grade students,” he said. “It wasn’t a permission slip; it was something that was a one-way communication about our club.” That doesn’t sound too bad until he admits that he made the announcement intentionally vague in order not to raise any concerns from parents. “We intentionally left it broad in that it was a club about acceptance, tolerance, diversity, and identity,” he said. But that’s not what the clubs are about. They are about affirming magical gender identity and leading your child down the path to medicalization and a lifetime of pain and dependence on Big Pharma.

No permission slips needed, just a “one way communication to home about our club” and “we intentionally left it broad in that it was a club about acceptance, tolerance, diversity and identity.” 3/ pic.twitter.com/zGnzyIyga6

Buttons also took screenshots of Kieren’s website that show the types of materials used in these clubs. One instruction sheet engages in anti-science baloney saying, “When babies are born, doctors look at their outside (and sometimes their inside) and assign them a label, or a sex.” They also push false assertions about pronouns. “You can’t tell a person’s pronouns by looking at them,” they say. Again, I say, baloney. This is teaching children to deny what their eyes see. It is gaslighting, and it is dangerous. This should never be happening in a public school. These cultists are spreading a belief system based on nothing but magical wishes and unicorn poop. This is a religious movement that needs to be stopped at the doors of our public schools. We separate church and state here. The Gender Woo-Woo Cult needs the cold water of reality poured over this experiment.

The sick left won’t willingly obey the rules. They’re going to have to be prosecuted and punished. They simply get a kick out of destroying childs’ minds.

Godless atheists are attacking the very Christian values they hold themselves by sexualizing everything and re-inventing what it means to be human.

Just another Tower of Babel.

They are grooming kids to be gay or trans, which are psychological disfunctions. It’s like if we sawed off toddlers legs and told them they were Little People, and it was how they were born inside and stuff.

Ah. You’re a “Christian.” The Nathan Blue picture begins to come into focus.

It is pretty godless to try to infect young minds with a degenerate and anti-science cult. There isn’t any other way to describe it accurately.

Ah yes, Nathan has never made it a secret he is an active member in his faith, a real man.
Do you require a box to put people into?
Has your Masters in queerology SEL taught you to do that?

Your ideas of what makes “a real man” or “a gelding” are of no interest to me, mainly because you’re a half-witted psychopath, but thanks for sharing.

Your ideas of what makes “a real man” or “a gelding” are of no interest to me, mainly because you’re a half-witted psychopath, but thanks for sharing.
Practicing Psychiatry without a license again, and as normal very piss poorly.

“Has your Masters in queerology SEL taught you to do that?”

My bachelor’s was in queerology, actually. Sac State, class of 1985. It was the first accredited queerology program in the country. Then I got a single-subject queerology teaching credential in 1986.