The Epidemic of #DiedSuddenly 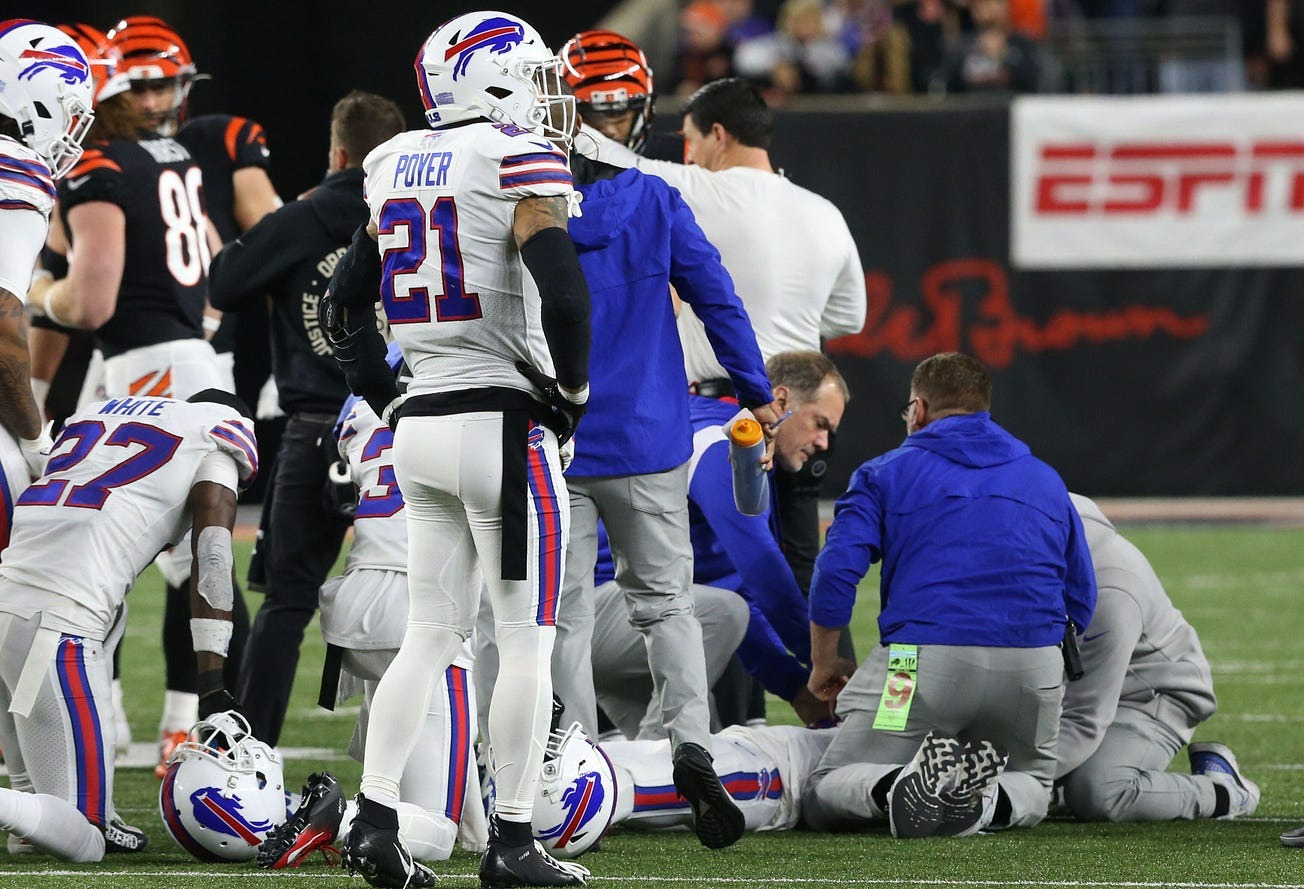 By Vinay Prasad and John Mandrola

Why are so many people, many of them quite young and seemingly in the peak of health, dropping dead? Today, the news of such events is so inescapable that it feels like an epidemic.

Perhaps the most high profile of these was the near-death, on national television, of 24- year-old Buffalo Bills football player Damar Hamlin. Hamlin went into cardiac arrest after a routine hit during a game earlier this month. He was ultimately saved by prompt medical care. But during the drive from the field to the hospital, Hamlin became a potent political symbol.

Across social media, prominent pundits and activists—most on the right but some on the left—tied Hamlin’s injury to the Covid vaccine. “Prior to 2021, athletes collapsing on the field was NOT a normal event. This is becoming an undeniable (and extremely concerning) pattern,” tweeted Lauren Witzke, who was the Republican nominee in the 2020 Delaware Senate race. Social media was abuzz with similar speculation.

A troubled, uncertain public is increasingly turning to a single, ominous explanation for such events: Covid vaccinations, especially those from Pfizer and Moderna that use the new mRNA technology.

On Twitter, an active subculture using variations of the hashtag #DiedSuddenly tracks such unexpected deaths—a teenage basketball player dropping dead; a track star collapsing on the field; a young teacher dying of a heart attack in front of her class—and implies that vaccines are the cause. A discredited anti-vaccine documentary, Died Suddenly, has reportedly been seen by millions. And the night of Hamlin’s collapse, Fox News host Tucker Carlson, referencing a supposed study of sudden deaths among Europeans athletes, made the debunked claim that “Since the vax campaign began, there have been more than 1,500 total cardiac arrests… and two-thirds of those were fatal.”

Is there truth to any of these claims? Is the public right to be concerned? Are there actually more healthy people dropping dead than usual—or is this simply confirmation bias at work? Can we dismiss anything that travels under the banner of “died suddenly” as conspiracy theorizing? And how should we understand why so many Americans are drawn to this explanation?

At least part of the answer to that last question is the serious information void on this subject—which is what we want to remedy in this essay. One of us is a practicing cardiologist (John Mandrola). The other is a practicing hematologist and professor of epidemiology (Vinay Prasad).

Cards on the table: We think the vaccines are an important tool for preventing severe illness and death among vulnerable people—particularly the elderly and those with certain underlying medical conditions. But we have been concerned that our federal officials recklessly continue to push for multiple Covid shots for everyone five years old and up, despite the growing evidence that these vaccines may not be appropriate for all. We are also concerned about the way side effects of the vaccine, particularly among young men, have been downplayed.

For these reasons and more, we believe in being transparent and honest with a public that has lost trust in our essential public health institutions.

What are the side effects of the vaccine?

If you are one of the many millions of Americans who received the vaccine, chances are you had short-term side effects, such as a day spent in bed, arm pain, chills, fever, and headache—all common responses to many vaccines. But Covid-19 vaccines have been linked to more serious events.

Shortly after the release of the vaccines, those developed by Johnson & Johnson and AstraZeneca (which use a different technology than Pfizer and Moderna) were linked to a clotting condition that caused fatal strokes in a small number of women of childbearing age. The condition is so dire that its clear link to the vaccines was discovered relatively quickly, despite occurring at extremely low rates. We both argued early on that the J&J shot should be severely limited, if not outright banned, for women under the age of 55. This was for the simple reason that a safer alternative (the mRNA vaccines) existed for this age group, and that the clotting side effect was absolutely catastrophic.

Indeed, for very young women, or for women who had recovered from a Covid-19 infection, we thought that skipping the vaccine entirely was preferable to getting the J&J. The safety signal for this shot was noted in April 2021, but it wasn’t until the following December that the Food and Drug Administration (FDA) took the soft action of deprioritizing the vaccine, when it should have gone further and removed it.

Most vaccinated Americans, however, get either the Pfizer or Moderna vaccines, and it is the rare but serious side effect from these shots that generates most of the public concern. This side effect is myocarditis, an inflammation of the heart muscle. Nearly all of the accusations of #DiedSuddenly imply injury from vaccine-induced myocarditis.

Myocarditis is not a trivial condition. Hospitalization is often required, and, after release, restrictions are put on patients regarding athletic activity and exertion.

How common is this side effect?

At first, public health officials were dismissive of myocarditis concerns. But even after they had to acknowledge the existence of vaccine-related myocarditis, they continued to downplay its significance. A joint statement in October 2021 from the CDC and the Department of Health and Human Services said of the condition: “Only an exceedingly small number of people will experience it after vaccination. Importantly, for the young people who do, most cases are mild, and individuals recover often on their own or with minimal treatment.”

Some experts cited studies that showed that the risk was very low—in the range of 1 in 100,000 vaccinated people. Such estimates were true, but hid a critical nuance: Post-vaccine myocarditis occurs at much higher frequencies—estimates are up to 30 times higher—in healthy young males. The difference in incidence of myocarditis for this population is crucial, especially given that young people have the lowest risk for serious complications from the virus itself.

The risk of developing myocarditis rises after the second dose of vaccine, and Moderna is implicated more often than Pfizer. As a result, some European and Scandinavian countries have limited the use of Moderna in people under age 30.

This winter, the Danish Health Authority recommended boosters only for people over age 50—and those under 50 who have specific medical conditions. People under 18 are not offered Covid-19 vaccines (with limited exceptions) because, the authority says, “Children and adolescents rarely become severely ill from the Omicron variant of covid-19.” The UK government also limited their 2022 autumn booster to adults over 50.

By now we were supposed to have a better idea of how often heart inflammation affects people aged 16 through 30 who get the Pfizer vaccine. The FDA authorized Pfizer to conduct a study on this population to look for subclinical myocarditis. It was scheduled for availability at the end of last year, but to date, no news on this pressing issue has been forthcoming. The failure to report this data is notable in light of a recently published study from Thailand, which reported one case of myocarditis and seven cases of cardiac enzyme elevations in 300 adolescents who received two mRNA vaccinations.

Two additional studies published in the past few months have raised concerns about the connection between the mRNA vaccines and myocarditis. A group at Harvard examined blood from children hospitalized for myocarditis after a Covid-19 vaccination and compared it to blood from healthy children without myocarditis who also had the vaccination. Their main finding was striking and unexpected: The children with myocarditis had dramatic elevations in the circulating Covid-19 spike protein generated by the vaccine. This suggests that prolonged exposure to the spike protein may be a causal factor in vaccine-caused myocarditis.

Military personnel that didn’t want to be killed by the vaccine and were fired are being forced to pay back their signing bonus.