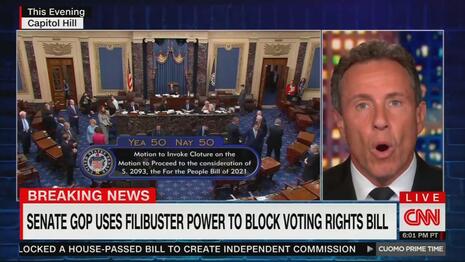 Strange how Republicans object to the 2020 voting rules being applied to their future races, while continuing to insist that there was nothing to complain about in the 2020 presidential election.

In any event, they stopped it. For now.

Senate Republicans torpedoed the “For the People Act,” a federal takeover of elections, on Tuesday night. The legislation received 50 affirmative votes along party lines, with no Republican support. Democrats were unable to overcome the GOP filibuster to move forward with the legislation.

This is a bad bill. I oppose it vehemently.

And yet there was no fraud, using the same corrupt techniques, in Trump’s supposed defeat!

It’s almost as if the corporate-controlled pawns of the Ruling Class we call “Republicans” joined with their Democrat buddies to “fortify” the election against Trump.

Leftwing “journalists” of course acted like DNC Enforcement Thugs and began crying out for vengeance.

You know, like objective writers of the First Draft of History always do.

.@MaraGay on Dems’ bill nationalizing state elections failing in the Senate: “Some of the darkest hours of your history books coming to life" pic.twitter.com/WKtr3qpTbP

S1 was essentially in effect in multiple states during the November election. Over 80% of Republican senators voted to certify the results. If it’s such a big concern now, why wasn’t it back then? “Sleeping with the enemy” perhaps?