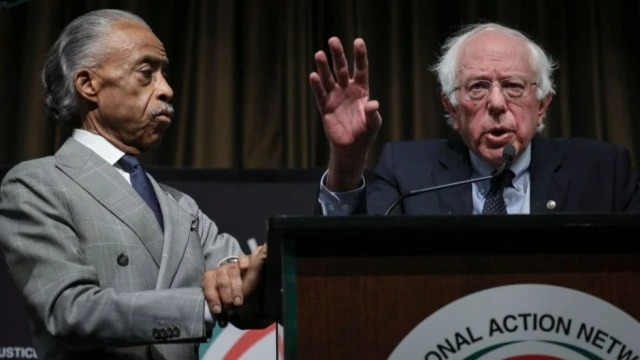 The lesson from the $22 trillion record of Great Society compensatory payouts is that massive infusions of federal money are more apt to ensure social disruption and dislocation than alleviate them.

The last time racial reparations made the major news was on the eve of September 11, 2001 attacks. The loss of 3,000 Americans, which for a time fueled a new national unity, quickly dispelled the absurdities of the reparation movement, and turned our attention toward more existential issues.

Now the idea is back in vogue again. Here are 10 reasons why the nation’s—and especially California’s—discussions of reparatory payouts are dangerous in a multiracial state, and why reparations are not viable either in an insolvent state or a bankrupt nation at large.

We live in an absurd woke age of retribalization. It has witnessed Senator Elizabeth Warren (D-Mass.), for mutual advantage, advertised as Harvard’s first Native-American law professor.

“Empire” actor Jussie Smollett initially was canonized by our top elected leaders and exempted for months by Chicago legal authorities after claiming the following absurdity: two white, MAGA-hatted racists, on their apparently routine nightly racist patrols in a liberal Chicago neighborhood and equipped both with special bleach that does not freeze in subzero temperatures and an ever-ready, just-in-case noose, assaulted Jussie. They put a rope around his neck and libeled his predominately black “Empire” soap-opera show—only to be repulsed single-footedly by a courageous Smollett, while retaining in one hand his cell phone and in the other his late night Subway sandwich.

Note that in these nutty cases and thousands like them, there is the cynical assumption that current American society, and the government as well, reward claims of racial victimization. That is why a Ward Churchill or Rachel Dolezal constructed new racial identities to game the system for profit.

One of the racialist universities’ current admissions challenges is their checkbox of “mixed race.” Whites and Asians often feign mixed parentages in hopes of being assumed either part black, Latino, or Native American. Any such partial lineage is seen as preferable to their own race. In our old racist society, one used to attempt to pass for white; in our new racist society, one attempts to pass for non-white.

Current racial tribalization obsessions have descended into a nadir that makes Al Sharpton’s 1990s Tawana Brawley/Crown-Heights career start (“If the Jews want to get it on, tell them to pin their yarmulkes back and come over to my house.”/ “We taught philosophy and astrology and mathematics before Socrates and them Greek homos ever got around to it.”) look amateurish in comparison. In this context, new calls arise for ludicrous reparations simply because we have become a ludicrous society.

Yet to further those claims, they ultimately will rely on DNA certification (ask Elizabeth Warren how that went down). Perhaps some will resort to the sort of sick rules of past racialized societies such as the Old South (“the one-drop rule”), Hitler’s Germany (yellow stars), or apartheid South Africa (racial certificates). Stanford University recently deplored its recent past of anti-Semitic admissions—even as it has adopted an entire canon of racial classifications to return to the very categories that it now claims to regret. After all, Jews with superior transcripts in the 1950s were turned away for being Jewish and now a century of regression later are turned away for being considered white.

Do we adopt the South’s 1/16 rule that is occasionally used by Native-American gaming casinos and perhaps, stealthily, universities? Will blacks applying for reparations have to hire genealogists to calibrate percentages of racial purity to assess corresponding reparatory remunerations?

How will the multimillionaire Barack Obama be adjudicated? He has zero African-American parentage. He went to prep school, funded by his white grandmother, a bank president. He is half-black due to his Kenyan father. But the latter was a temporary resident of the United States with no connection to slavery or Jim Crow.

Do we distinguish between African Americans born in the United States and African and Caribbean immigrants with no histories of ancestors who lived under Jim Crow or were American-based slaves? How white or Asian or Latino can one be and still qualify for black reparations? These are absurd questions only because our absurd system demands that they will ultimately have to be answered absurdly.

California is at the forefront of the reparation lobbying effort. Yet it was neither a slave nor a Jim-Crow state. On the eve of the Civil War, the federal census recorded only about 4,000 free black citizens residing in the free state of California, or about 1 percent of the nearly 400,000 residents in 1860.

The relatively new state remained part of the Union, in which no major battles of the war over slavery were waged. The pathology did not exist anywhere in California and the population was overwhelmingly loyal to the Union.

In other words, reparations based on slavery is not a cohesive argument for the current-day 40 millions of California, in which over one-quarter of the residents were not even born in the United States.

Are whites with Confederate ancestors more culpable than Michiganders or Ohioans, whose great-great-great grandfathers marched through Georgia, freeing slaves or who died fighting side-by-side with black soldiers at Fort Pillow against General Nathan Bedford Forrest’s Confederates?

Will the ancestors of blacks who fought with the Confederacy, or were descended from slave traders in Africa, qualify for reparations? Will whites whose ancestors died fighting the racist Third Reich or the racist Imperial Japanese be given tax exemptions from paying the cost of reparations?

If prior violent felony convictions disqualify one from voting, will the same be true of reparations? Will convicted murders, rapists, and assaulters be issued government reparatory checks?

Will Armenian- and Jewish-Americans have equal or more compelling claims as well? Both groups arrived following the genocides of their own people. Many had relatives who perished due to discriminatory immigration laws that denied them entry into the United States. Nearly 8 million Jews and Armenians were murdered in the Nazi and Turkish genocides. Those totals are 23,000 times greater than the 3,500 blacks believed to have been lynched from 1882-1968 (a period during which 1,300 whites were also lynched).

Arguably these two groups suffered more killed in their 20th-century histories than all other American racial and ethnic groups combined. And such genocide, in our current ways of thinking, was imprinted on their collective psyches in a way few other oppressed groups could imagine.

Both were subject to zoning restrictions on home purchases and Jews were overtly discriminated against in Ivy League admissions for a half-century.

Stanford University was founded in part on the profits of exploiting cheap Chinese railroad labor, often in racist fashion. For a time, 19th-century racialist discussions centered around whether starving Irish immigrants were fully human. The recorded hot-mic outbursts from various Latino Los Angeles City Council and union members reminds us that racism is not a black/white binary. Instead, it has become a circular firing squad, with ammunition that will be radically increased by discriminatory reparations.

5) Plus and Minus Ledgers

If we are to envision individuals only as racial collectives, and then assess their grievances on the basis of distant claims of ill-treatment, and if we are also to assess contemporary black claims as of greater immediacy than say those of Asians, Latinos, Native Americans, poor whites, gays, the disabled, and the transgendered, then if we are no longer individuals, are we to calibrate both relative pluses and minuses that help calculate oppressors versus the oppressed?

Therefore, should we also ascertain each racial group’s federal crime statistics? That way we could calibrate whether any one tribe has been collectively disproportionality guilty of hate crimes or violent rape, murder, and assault, committed against other groups, who have been percentagewise inordinately the victims of hate and violent crimes?

Then in our sick game of racial arithmetic, through such a complex calculus, should we assess which particular group falls on the plus or minus side of the reparations ledger? Will groups who have been denied college admissions and job opportunities on the basis of their race since 1965, likewise lodge claims against the state, calculating how institutionalized race-based discrimination has harmed them financially?

In this context, would Asians who proportionately are least likely as a collective to commit crimes, but suffer disproportionately as victims of hate crimes and reverse discrimination in college admissions, and who have weathered a history of anti-Asian discrimination, perhaps have the best claim on reparatory compensations?

Or are reparations really not about the past, but solely the present and thus fueled by one reality: blacks believe they collectively are not doing as well economically as Latinos or Asians and therefore attribute the lack of parity to the past, in order to find equity in the present that so far has not been attained?

The Heritage Foundation not long ago pegged the cost of Great Society redistributionist entitlement programs at $22 trillion. For a half-century the courts have engaged in multibillion dollar reparatory settlements. To take one example, under the so-called Pigford I and II payouts, black farmers received $5 billion dollars in payouts. Are we to total up thousands of such court settlements or other compensatory federal entitlements that were race-based to subtract from the current racialized reparatory obligations? Can a half-century of affirmative action be monetized, calibrated, and deducted from reparatory obligations?

Again, ridiculous questions like that arise because ridiculous people are ridiculously attempting to monetize purported reparations.

Over one-fifth of the California population currently lives below the poverty line. One third of the nation’s welfare recipients live in California. Will reparations in the state with the largest number of absolute poor and homeless people ignore class considerations—in an age when class and racial statuses are no longer synonymous?

Are some of the grandchildren of the Oklahoma diaspora, who work minimum-wage jobs and have no college-educated relatives in their families, to pay increased taxes to ensure reparations to third-generation, college educated, diversity, equity, and inclusion, six-figure salaried campus administrators?

Regardless of how the distribution of reparations is decided, there is but one way to determine who PAYS reparations. That should be anyone that supports or has supported Democrats.

It’s significant that Democrats have not owned up to their racist past. We are not very far removed from current Democrats lionizing a former Grand Kleagle of the KKK. We also see the racist DNA of Democrats come forth when it benefits their agenda, as when a black conservative gets traction and attention. No, Democrats are cured of their racism yet. Racism is only alive today because Democrats keep resuscitating it.

And, any black that has been a Democrat supporter is exempted from receiving any reparations. They are, apparently, OK with the past.

How will the multimillionaire Barack Obama be adjudicated? He has zero African-American parentage. He went to prep school, funded by his white grandmother, a bank president. He is half-black due to his Kenyan father. But the latter was a temporary resident of the United States with no connection to slavery or Jim Crow.

Do we distinguish between African Americans born in the United States and African and Caribbean immigrants with no histories of ancestors who lived under Jim Crow or were American-based slaves?

Locally, in Salt Lake City, several mixed race families are moving to CA to get “reparations.”
the children look like you average African American because missionary mormon girls found husbands in Africa.
Which parent will have to hide?
The blond, blue-eyed mormon mom, or the African man with his clipped British accent?
Neither the parents nor the children should qualify.
But we’ll see how CA deals with who is black enough (once again.)

Newsome won’t care. All they care about is assuaging their own racist guilt by giving away other people’s money.