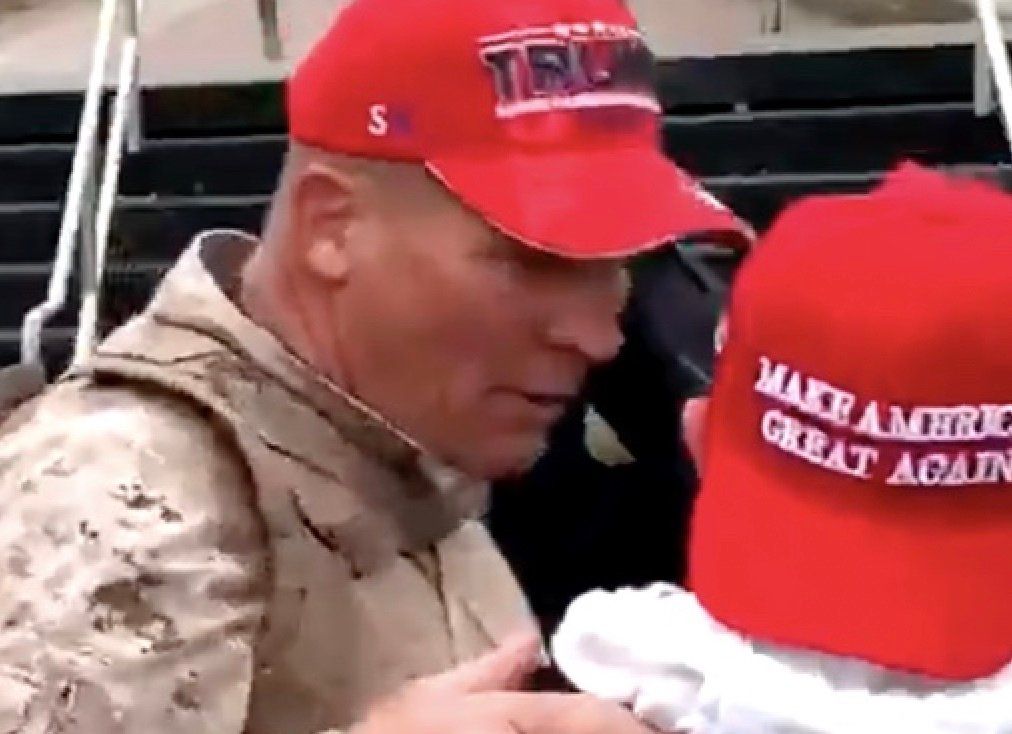 Defenders of Ray Epps contend he has not been arrested because he didn’t break the law during the Capitol riot, but a woman caught on video standing next to him is facing up to a year in prison for being in a “restricted area” — something Epps was also filmed doing.

Raechel Genco was seen on video standing just feet away from Epps on Jan. 6 as he whispered into the ear of her boyfriend, Ryan Samsel, who promptly led a mob that stormed a police barricade. But unlike Samsel, the 38-year-old Pennsylvania woman simply stood by. And unlike Epps, Genco was not seen a day earlier encouraging a crowd to enter the Capitol illegally.

That incident took place just outside the restricted area, but Epps was later filmed well inside the forbidden zone, as was Genco. But of the two, only Genco was charged with a sole count of trespassing on restricted Capitol grounds. She faces up to a year in prison if convicted.

Prosecutors presented a single frame of video footage showing Genco walking on restricted Capitol grounds in their criminal complaint. Epps was also filmed on the steps of the Capitol building in front of a police line, well inside the restricted area.

“We’re holding ground — we’re not trying to get people hurt,” Epps was filmed telling the rioter while standing on restricted Capitol grounds.

Defenders of Epps, such as Republican Rep. Adam Kinzinger of Illinois, say Epps is a free man because there is no evidence he engaged in acts of violence or entered the Capitol building.

The New York Times reported Tuesday that Epps committed an offense by entering a restricted part of Capitol grounds but added that the offense “has largely gone unpunished.”

IMPORTANT: this is exact moment the siege of the Capitol building began as the two men in front ripped down a preliminary barrier & rushed officers who were behind a 2nd barrier

They then encouraged others to follow their lead. Officers appeared to be taken completely off guard pic.twitter.com/LE0a01PXBi

Barbara Palmer, Genco’s attorney, declined to comment on the treatment of her client. Nearly every nonviolent Jan.6 defendant facing criminal charges is accused of breaching the Capitol building during the riot, regardless of their method of entry.

Samsel, who took part in the breach that prosecutors said in a recent court filing “opened up the floodgates to the Capitol,” was hit with a slew of charges including using a deadly weapon (a metal barrier) to assault a police officer. He has been in jail for a year and faces up to 20 years in prison if convicted of the most serious charge he faces.

4) He didn’t enter the Capitol on Jan 6, and was removed from the most wanted list because apparently he broke no laws. I’m pretty sure the FBI wouldn’t be dumb enough to put their own agent on a wanted list. Ray Epps has cooperated with the Jan 6 committee and we thank him

Epps’s unexplained removal from the FBI’s most wanted list of Capitol rioters in early July, in addition to his lack of arrest for his involvement in the riot, has led some Republican lawmakers to speculate that Epps may have been an FBI informant tasked with riling the pro-Trump crowd at the Capitol into a violent frenzy.

FBI Executive Assistant Director Jill Sanborn refused to answer questions from Republican Sen. Ted Cruz on Tuesday about Epps and whether FBI informants played any role at the Capitol riot.

Epps told the Arizona Republic one week after the riot that he did nothing wrong and that the people who engaged in violence to gain entry into the Capitol were “totally, totally wrong.”

The left relies on the ability of the leftist Ministry of Propaganda to protect them and leave way too much evidence behind to succeed without heavy-handed totalitarian tactics. No one is fooled, just some object and others cheer it on.

Notice Epps lawyer, an EX-FBI agent only says Epps IS not an FBI informant.

Present tense.
What about EVER?
What about all the other alphabet gov’t agencies in Deep State?

The Capitol has pretty extensive security protocols. There are 3 sets of magnetic locking doors when you unlock one to open the next the one behind you must be locked. Who purposely deactivated security measures on Jan 6, were they ever in place?
If Nancy was not in charge of security that day who was?
The way Epps has been treated vs others is not the shiny object we should be chasing.
Never let go of the political Prisoners being held in DC. Feds can partially charge an American Army Veteran of sedition but cant charge the men held for purely politcal reasons and to instill fear in other patriots. Dont look away from those mens RIGHT to a speedy trial, nor the conditions in the antique portion once used as an insane asylum. They are held without charges. Not in some Turkish prison but here in our Capitol.

And let’s see how Rhodes is treated vs those no-names charged with trespassing.