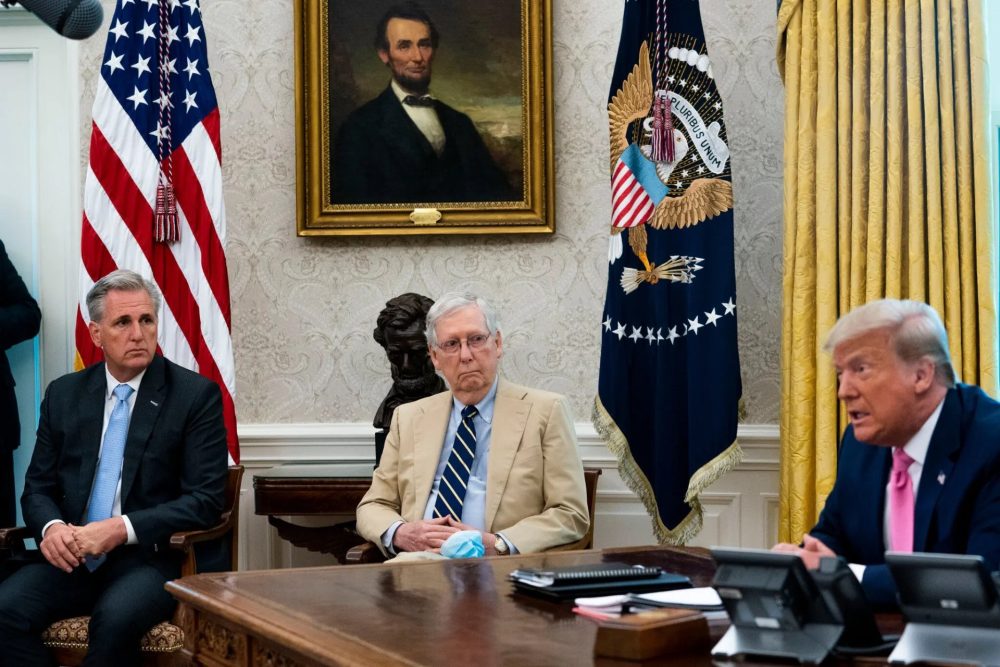 The trio at the head of the party – dubbed the ‘McLeadership’ by this publication – have quietly attempted to foist blame onto President Trump for the results since November 8th. So too have Republican mega donors who ran to corporate news outlets before the mid terms, declaring their allegiances to Florida Governor Ron DeSantis, while turning their backs on Trump.

But ordinary, likely voters appear to be rejecting what the GOP and their bankrollers are selling. According to the latest data by Rasmussen, just 16 percent of conservative voters blamed individual candidates, and 20 percent blamed Donald Trump. More than double those who blamed Trump – 43 percent of conservative voters – blamed Republican leadership.

They were asked: “Republicans did not do as well in this vear’s elections as many had expected. Who is most to blame for this, the individual candidates, the Republican Party leadership, Donald Trump? Or is it nobody’s fault?”

Seventeen percent of those asked said it was “nobody’s fault,” while five percent were unsure.

The numbers flip drastically when asking self-identified liberals, raising questions as to who anti-Trump Republicans are now throwing their analysis in with. The ostensibly conservative National Review, for example, appears to sympathize far closer with left wing analysis than right.

Liberals blamed Trump for the GOP underperformance to the tune of 46 percent, versus 29 percent for the McLeadership, and 15 percent for individual candidates.

Mitch either elected Feterneck. Hobbs and Kelly on purpose; or he is a dumb as Jeb and Jo are.

I have believed for years, and still do, that
Mitch is much smarter than Jeb. He torpedoed the conservatives with intent to kill!

Mitch the bitch wanted nothing to do with a majority having been elected with MAGA freshman Senators. Mitch the bitch is happy to be in the minority and that is a problem.

Last edited 16 days ago by TrumpWon
0
Reply
another vet

The Republican leadership had no plan and back stabbed their candidates, see McConnell. And McConnell was just put back in charge and they are pushing for McDaniel to be reinstated as head of the RNC. McCarthy is a question mark. They have learned nothing and continue to flip off the base of the party.

Until they wake up and deal with the fact that Republicans vote on election day and cast one vote per person and the demokrats vote early and drop multiple ballots in a ballot box, they will continue to lose. The leadership refuses to see the BIG problem because they are ether stupid, cowards, or complicit. When you win the NPV by almost six million votes but only pick up a net gain of around nine seats as opposed to 2010 when you won 63 seats with a 2.5 million NPV margin, alarm bells should be going off. There was a Red wave. It was offset by the 2020 dem playbook. Florida made their gimmicks illegal and the Republican candidates ran a strong unified front and just look at the results. Those should have been mirrored nationwide.