Peace In Our Time: Biden to Allow Germany, I Mean Russia, To Take Parts of Czechoslovakia, I Mean Ukraine, With Promise that Hitler, I Mean Putin, Will Stop All of His Territorial-Expansion Behavior Soon 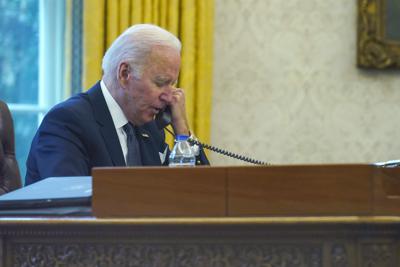 Biden will press Ukraine to basically accept that the Donbas region, which Russia has troops in, has been successfully conquered by Russia and is now part of Russia.

But as a face-saving measure — to save Biden’s face and no one else’s — the Donbas will be called an “autonomous region” which is under no one’s control.

Except, you know, the actual Russian troops that actually control it.

This would only be a “victory” for Joe Biden, and only a PR one at that.

Our foreign policy is down to Democrats begging Russia, “Please do not make this too humiliating for us, because we have midterms coming up and we’re already going to lose a lot of seats. And you guys remember — we were always your close ideological allies before we pretended to be your savage opposition starting January 20, 2017.”

Administration officials have suggested that the U.S. will press Ukraine to formally cede a measure of autonomy to eastern Ukrainian lands now controlled by Russia-backed separatists who rose up against Kyiv in 2014. An undefined “special status” for those areas was laid out in an ambiguous, European-brokered peace deal in 2015, but it has never taken hold.Biden also will have to finesse Ukraine’s desire to join NATO. The U.S. and NATO reject Putin’s demands that they guarantee Ukraine won’t be admitted to the Western military alliance.

But senior State Department officials have told Ukraine that NATO membership is unlikely to be approved in the next decade, according to a person familiar with those private talks who spoke on condition of anonymity.

For Biden, the challenge will be encouraging Kyiv to accept some of the facts on the ground in eastern Ukraine, without appearing to cave to Putin — a perception that could embolden the Russian leader and unleash a fresh line of condemnations by Republicans as Biden’s popularity is already in decline.

Our “foreign” policy under Democrat presidents always, always devolves into a purely domestic policy psyops operation aimed at deceiving the American public for the political advantage of the Democrat Party, begging foreign regimes and the propaganda state media to pretend that everything’s going just swell when things are falling apart and that America is winning when America is being humiliated.

Remember when any policy decision with respect to Russia short of declaring physical war on a nuclear-armed country was proof positive that the president was under the direct control of the KGB?

I remember, because I’m older than four years old

Feckless and addled, biden does not even put up an effort to thwart Putin’s attempts at reconquista for the former eastern communist block. Other former Soviet satellites are next…

Recall when the Berlin Wall fell, the eastern confederation of Soviet states crumpled physically, economical, and congressionally. These disbanded states has to rebuild on their own. America put tons of monies into these faltering states. The former Eastern block states have become very rich with massive global markets. Russia like ccp has a very fragile economic infrastructure. the moronic pres. is no different than Chamberlin was to Hitler. History is repeating itself. Taiwan will fall shortly and ccp will Rape the countries of its riches and banking institutions.

I’ll bet if Bursima was still paying off Hunter and it was more than what Russia was kicking back to the Biden Crime Family, Ukraine’s security would be assured.

There is the possibility of incriminating evidence within the Ukranian government that biden would not like to be exposed.

But, quite frankly, we already know of the corruption vp biden was involved with in The Ukraine…

Guess dementia Joe didn’t play the Nordstream II card on Putin that I thought I saw someone around here say he’d use to sway Vlad.
But then again the only pipelines Joe hates are American ones.

The US has information that indicates Russia has prepositioned a group of operatives to conduct a false-flag operation in eastern Ukraine, a US official told CNN on Friday, in an attempt to create a pretext for an invasion.

The official said the US has evidence that the operatives are trained in urban warfare and in using explosives to carry out acts of sabotage against Russia’s own proxy forces.

Pentagon press secretary John Kirby said the Defense Department has credible information indicating Russia has “prepositioned a group of operatives” to execute “an operation designed to look like an attack on them or Russian-speaking people in Ukraine” in order to create a reason for a potential invasion.

The allegation echoed a statement released by Ukraine’s Ministry of Defense on Friday, which said that Russian special services are preparing provocations against Russian forces in an attempt to frame Ukraine. National security adviser Jake Sullivan hinted at the intelligence during a briefing with reporters on Thursday…

What a great opportunity! You should have your attacks on Biden ready. Maybe you could pick up a few ideas from RT, Sputnik, or Pravda…

All made possible by idiot Biden’s weakness and incompetence. Democrats threaten world peace.