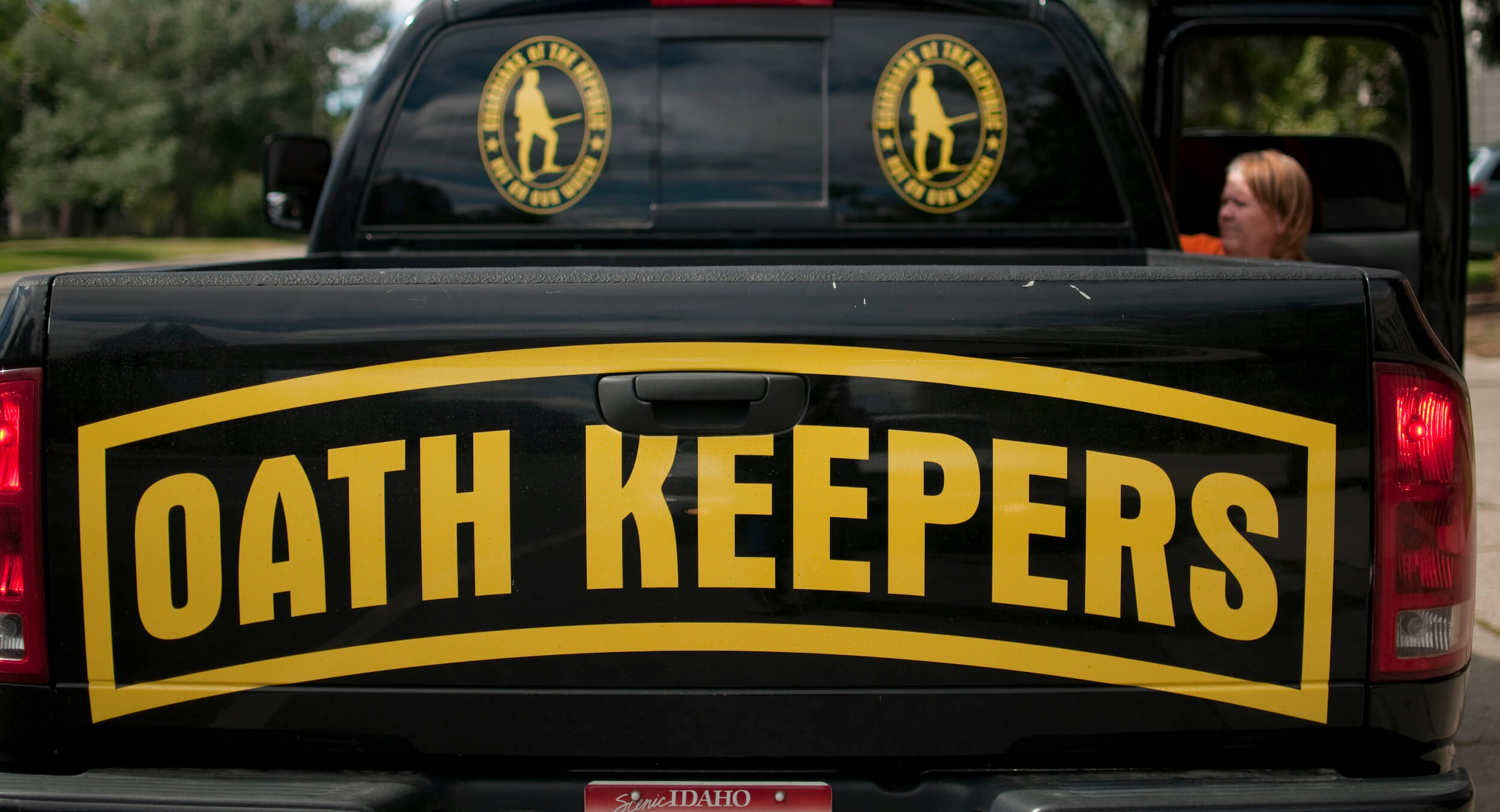 One year after the events of January 6—despite their best efforts—federal prosecutors still hadn’t filed a single criminal charge that came anything close to resembling “insurrection” or domestic terrorism. Democrats and regime media were agitated: How could they continue promoting the four-hour disturbance as an attempted coup if the most prevalent offense charged by the Department of Justice a year later was the petty misdemeanor of “parading” in the Capitol? Even the chief judge for the D.C. district court overseeing each January 6 case had publicly expressed her frustration that the government wasn’t producing harsher indictments against Trump supporters.

So Matthew Graves, the U.S. Attorney for the District of Columbia, swooped in to save face. Eleven members of the Oath Keepers, an alleged militia group, were charged on January 12, 2022 with seditious conspiracy for their involvement in the Capitol protest. Elmer “Stewart” Rhodes and 10 others were accused of conspiring “to oppose by force the authority of the Government of the United States, and by force to prevent, hinder, or delay the execution of any law of the United States.” The law the Oath Keepers attempted to stop, Graves claimed, was the “peaceful transfer of power” vested in both the 12th and 20th amendments.

The indictment was preposterous on its face, something only a grand jury seated in the most Democratic city in the country could countenance. None faced a weapons charge, raising the natural question of how a group of military veterans, most suffering various degrees of service-related disabilities, planned to overtake the government “by force” without a single firearm or explosive device. Despite constant talk in the media about the Oath Keepers’ quick reaction force, individuals who brought weapons with them on the drive to Washington left them behind in a Virginia hotel—legally—so as to not violate the city’s strict gun control laws.

Only one man, Joshua James, was accused of assaulting police in a heated confrontation with officers that afternoon. (He later pleaded guilty to seditious conspiracy after the government moved to take away his military benefits—James was nearly killed by a roadside bomb in Bagdad in 2007 at age 19, suffers lifelong injuries, and was awarded a Purple Heart—and threatened the father of three young children with life in prison if convicted.)

Two groups of Oath Keepers, described as “stacks” by prosecutors, entered the Capitol about 30 minutes after the building had been evacuated; the first group walked through doors that were opened from the inside on the east side. The second group entered shortly after 3 p.m. and exited a short time later.

Over a seven-week trial for the first five defendants, which started in September, prosecutors presented evidence of inflammatory chats featuring military-style bravado and condemnations of a stolen presidential election. Jurors watched a repetitive loop of videos showing three of the defendants entering the Capitol as well as screenshots of selfies taken inside the Rotunda. Jessica Watkins, a transgender Oath Keepers member from Ohio, was heard on an encrypted audio channel bragging about “sticking to the plan” before she and others entered the building. But far from acting as “insurrectionists” or terrorists, Oath Keepers viewed themselves as “backups” for law enforcement, available in case Antifa or Black Lives Matter rioters caused trouble as they had for months in Washington during the second half of 2020.

And witness after witness, including those for the government, admitted the defendants did not plan in advance to “storm” the Capitol. No matter—prosecutors argued that the accused could have entered into the “conspiracy” at any time, including moments before they walked inside the Capitol, and that the agreement didn’t require any specificity or overt consent. “The government also does not have to prove that all members of the conspiracy directly met, or discussed between themselves their unlawful objectives, or agreed to all the details, or agreed to what the means were by which the objectives would be accomplished,” the final jury instructions read. “What the government must prove beyond a reasonable doubt is that two or more persons in some way or manner arrived at some type of agreement, mutual understanding, or meeting of the minds to try to accomplish a common and unlawful objective.”

Jurors did not hear, however, from numerous FBI informants including the group’s vice president, who suffered a medical emergency as he boarded a plane for D.C. to testify. Judge Amit Mehta also refused to allow the jury to hear expert testimony and evidence of “agents provocateurs” located outside the east side of the building near the Oath Keepers yet remain unidentified and uncharged to this day.

Defense witnesses who saw the defendants act as a barrier between unruly protesters and law enforcement, including Capitol Police Officer Harry Dunn who took the stand for the prosecution during the trial, were prevented from testifying.

But the vagueness of the law’s language, the piecemeal body of evidence, and Judge Mehta’s obvious preference for the government’s case teed up the inevitable outcome: two men, Rhodes, who never went inside the Capitol on January 6, and Kelly Meggs, were found guilty of seditious conspiracy, the first Americans ever convicted of the exceptionally rare crime. (The last time the Justice Department brought seditious conspiracy charges against U.S. citizens in 2010, a federal judge tossed the case out of court.) Three others were acquitted of the charge. All five were found guilty of obstruction of an official proceeding, a post-Enron statute intended to prevent tampering with evidence during a congressional investigation not interrupting a government function.

The verdicts, cheered by the media and the regime, will serve as an accelerant in the Justice Department’s bastardization of arcane (seditious conspiracy) and inapplicable (obstruction of an official proceeding) laws to criminalize political dissent in the wake of January 6.  An act of sedition no longer requires proof of an elaborate plan engineered months if not years in advance, the use of heavy weaponry, and attempts to injure or kill lawmakers or law enforcement officials to take over government functions. All it requires is some heated rhetoric on social media or in private group chats coupled with a nonviolent entry into a public building.

“The most punishing aspect of the Kelly Meggs conviction is the fact he walked through an open door with no resistance from law enforcement and stayed inside the Capitol for 17 minutes where he led a prayer with other Oath Keepers in the Rotunda,” investigative journalist Steve Baker, who covered each day of the trial, told American Greatness on Thursday. “Then he walked to the stairwell where he diffused a potentially disastrous situation with Officer Dunn.” (Dunn, carrying an M-4 rifle, also had to be calmed down by a supervisor that afternoon.)

“Ninety percent of the government’s case relied on scary words, and Kelly Meggs definitely had some scary words,” Baker said. “But now he faces up to 86 years in prison.”

Baker said prosecutors had “all the resources to present this slick, fast, audio visual of interspersing slides and recordings taken out of context” to persuade the jury. But looking at the mixed verdicts of guilty and not guilty, Baker said, “makes no sense.”

It makes sense, of course, in terms of bolstering the phony, empty narrative that Trump supporters are domestic terrorists and that January 6 was a near-coup incited by the former president.

This regime’s judges would do Roland Freisler proud. The weaponized DOJ is as good as the Nazi People’s Court at persecuting and imprisoning political opponents. They started out with General Flynn and had a field day with the January 6th peaceful protesters. Meanwhile, violent terrorist thugs of BLM/ANTIFA laid violent, destructive, siege and assault to a federal courthouse and charges are dropped against all charged. The fascist character of this Democrat regime cannot be denied.

when Donald Trump summoned a mob to assemble in Washington, DC

When, exactly, did Trump summon the mob? Provide the summons. If you have such a great case, why is it necessary to lie?

Colbert’s crew committed more of an “insurrection” than Rhodes did, but since they are leftist propagandists, they get a pass