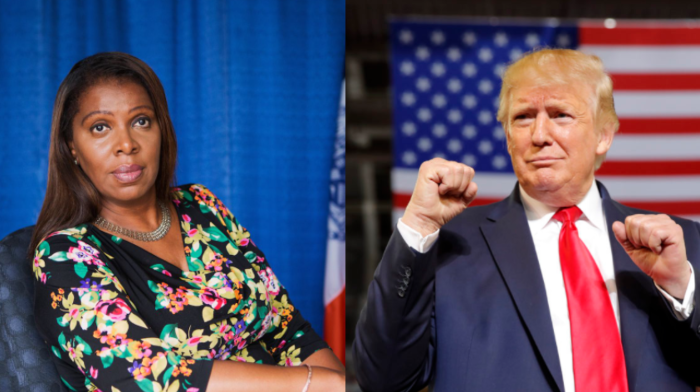 “He tasks me; he heaps me; I see in him outrageous strength, with an inscrutable malice sinewing it. That inscrutable thing is chiefly what I hate; and be the white whale agent, or be the white whale principal, I will wreak that hate upon him. Talk to me not of blasphemy, man; I’d smite the sun if it insulted me” – Captain Ahab, “Moby Dick” by Herman Melville

“New York Attorney General Letitia James filed a lawsuit Wednesday morning against Trump and several of his family members as well as associates and businesses, alleging “numerous acts of fraud and misrepresentation” on years’ worth of financial statements. James said Trump inflated his net worth “by billions of dollars” to secure loans and that he had help from his children Donald Jr., Ivanka and Eric.

New York Attorney General Letitia James, center, flanked by Buffalo Mayor Byron Brown, New York Gov. Kathy Hochul and other officials, speaks with members of the media during a news conference near the scene of a shooting at a supermarket in Buffalo, N.Y., on May 15, 2022. (AP Photo/Matt Rourke)

James requested that the New York Supreme Court permanently bar Trump and his children from serving as officers for any New York corporation, and bar the former president and the Trump Organization from participating in New York commercial real estate acquisitions or applying for loans in the state for five years.” (Courtesy FoxNews.com)

Can you say “Political Hit Job”?

The Far Left Democratic Party and all of their Hive-mind “New Bolsheviks” have been proving ever since the night of November 8, 2016 that “Obsession ” is not just a perfume any more.

While it was definitely a hoot to watch the Democrats and their minions The Main Stream Media and the New Bolsheviks have a complete and utter meltdown on that historic night, it made me wonder to what lengths the Democrat Elite would go in order to try to obstruct, impede, and even end the political career of Donald J. Trump.

The thing is, even after the Special Counsel’s Russia Investigation turned out to be nothing but a total embarrassment for the Dems, they decided that We The People still had to be saved from a “poor choice” as our President.

Even after the Soviet-style tribunal in which Adam Schiff, Nancy Pelosi, and the other Democrats found President Donald J. Trump guily and did not care that he is innocent and the resulting multiple impeachment, the Far Left Democrats remain obsessed with hurting Donald J Trump and anybody, Average Americans included, who stands with him.

Even if these ongoing attacks by James, the DOJ, and the members of the Hive-mind on Social Media continue, the Far Left Democrats will most assuredly lose in 2022 and 2024.

They will have shown their backsides way too often to average American Voters who elected Donald J. Trump as President because they were sick and tired of the Washingtonian Status Quo.

If the Democrats were ever to have even had a chance in the 2022 Midterms and the 2024 Presidential Election, it sure would not have been by siding with those on the Far Left End of the Political Spectrum in their demented obsession to somehow get Trump out of office, while not championing any sort of legislation which would benefit those average Americans mentioned earlier.

Average Americans are not happy with the Democrats and the lousy economy that we are currently experiencing.

Just like Captain Ahab’s obsession with the Great White Whale, Moby Dick, led to his and his crew’s doom, so the Democrats’ obsession with extricating President Donald J. Trump from public life and financial harming him and his family and friends doom their political future as a viable party which average Americans can relate to.

Guess what, Letitia.
A bank does “due diligence” before it lends to ANYONE.
A loan is an agreement between two private parties.
The Atty Gen has no standing.
She’s trying to manufacture an “October Surprise.”
But this one is absurd.

The thing is, even after the Special Counsel’s Russia Investigation turned out to be nothing but a total embarrassment for the Dems, they decided that We The People still had to be saved from a “poor choice” as our President.

Yet that “poor choice” provided more GOOD choices for this nation in 4 years than any other President before him. Of course, following up 8 years of Obama makes a great performance a slam-dunk, but Trump accomplished much no one else even bothered to attempt, much less accomplish.

Reining in unfair foreign trade, securing our border, making the nation energy independent, prison reform, Middle East peace and much, much more was brought about by Trump, yet the left seek to destroy him. I would like for those calling him a “threat to democracy” and one who “trampled our fundamental rights” to explain their accusations, for none have respected the Constitution and our rule of law more than Trump. In fact, those who assail him are who trample the Constitution, suppress individual rights and ignore laws.

This ambitious bitch will, hopefully, crash and burn publicly.

She has no case. The whole case is a political stunt. Even the NY slimes points out the case is a dud

One of the necessary elements to promote her case is there must be identifiable injury. All banks who loan President Trump money were repaid on time and with interest.