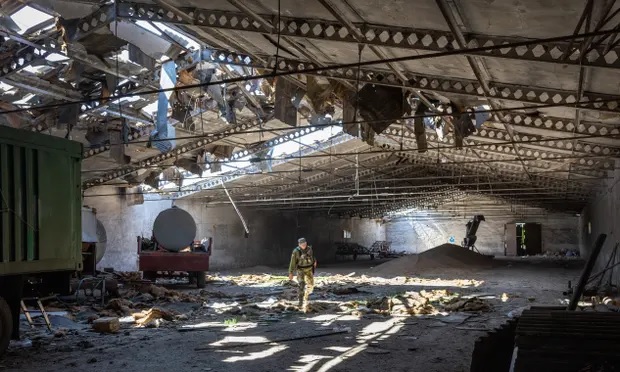 The United Nations has warned that the war in Ukraine has helped to stoke a global food crisis that could last years if it goes unchecked, as the World Bank announced an additional $12bn in funding to mitigate its “devastating effects”.UN secretary general António Guterres said shortages of grain and fertiliser caused by the war, warming temperatures and pandemic-driven supply problems threaten to “tip tens of millions of people over the edge into food insecurity”, as financial markets saw share prices fall heavily again on fears of inflation and a worldwide recession.

Speaking at a UN meeting in New York on global food security, he said what could follow would be “malnutrition, mass hunger and famine, in a crisis that could last for years”, as he and others urged Russia to release Ukrainian grain exports.

…Before the invasion in February, Ukraine was seen as the world’s bread basket, exporting 4.5m tonnes of agricultural produce per month through its ports – 12% of the planet’s wheat, 15% of its corn and half of its sunflower oil.

But with the ports of Odesa, Chornomorsk and others cut off from the world by Russian warships, the supply can travel only on congested land routes that are far less efficient.

It is not Russia that is withholding Ukrainian grain or cutting off its seaports. Ukraine does that all by itself. As the Russian Joint Coordination Headquarters for Humanitarian Response in Ukraine reports:

75 foreign vessels from 17 countries remain blocked in 7 Ukrainian ports (Kherson, Nikolaev, Chernomorsk, Ochakov, Odessa, Yuzhniy and Mariupol). The threat of shelling and high mine danger created by official Kiev in its internal waters and territorial sea prevents vessels from safely leaving the ports and reaching the open sea.In confirmation of this, the Russian Federation is opening daily from 08:00 to 19:00 (Moscow time) a humanitarian corridor, which is a safe lane south-west of Ukraine’s territorial sea, 80 nautical miles long and 3 nautical miles wide.

At the same time, the Kiev authorities continue to avoid engaging with representatives of states and ship-owning companies to resolve the issue of ensuring the safe passage of foreign vessels to the assembly area.

The danger to navigation from Ukrainian mines drifting off their anchors along the coasts of Black Sea states remains.

The Russian Federation is taking a full range of comprehensive measures to ensure the safety of civilian navigation in the waters of the Black Sea and the Sea of Azov.

That is just Russian propaganda you might say. But no, it is not. The International Maritime Organization (IMO) has published reports about the Maritime Security and Safety in the Black Sea and Sea of Azov:

At the start of the conflict approximately 2000 seafarers were stranded aboard 94 vessels in Ukrainian ports. 10 vessels have subsequently safely departed the Sea of Azov and 84, merchant ships remain, with nearly 450 seafarers onboard.

…The Council (C/ES.35) on 10 and 11 March agreed to encourage the establishment, as a provisional and urgent measure, of a blue safe maritime corridor to allow the safe evacuation of seafarers and ships from the high-risk and affected areas in the Black Sea and the Sea of Azov to a safe place in order to protect the life of seafarers, and ensure the mobilization and commercial navigation of vessels intending to use this corridor by avoiding military attacks and protecting and securing the maritime domain.

…The Russian Federation has informed IMO that it had established a humanitarian corridor, to provide for the safe evacuation of ships once outside the territorial waters of the Ukraine. Despite this initiative, there remain many safety and security issues which hamper access to the corridor and the ability for ships to depart from their berth in Ukrainian ports.Ukraine’s ports are at MARSEC (maritime security) level 3 and remain closed for entry and exit. Sea mines have been laid in port approaches and some port exits are blocked by sunken barges and cranes. Many ships no longer have sufficient crew onboard to sail.

Ukraine also provided their preconditions for the safe evacuation of ships from their ports. These include an end to hostilities, the withdrawal of troops and ensuring the freedom of navigation in the Black Sea and Sea of Azov, including carrying out mine-sweeping activities with the involvement of Black Sea littoral states.

The MARSEC level of a port is determined by the local authorities. Ukraine is simply prohibiting ships from entering or leaving the ports it controls. It has taken these hostage and makes unreasonable demands for their release.

It also has laid some 400 anchor mines around Odessa which are so old that some of them have parted from their chains and drifted south towards Turkey. It does not allow Russia to de-mine the sea.

Meanwhile foreign ships that had been held by Ukraine in Mariupol have been able to leave since Russia has taken the city and its harbor.

UN secretary general Guterres certainly knows all this. That he is accusing Russia of causing a blockade only shows that he does not honor the neutrality his position demands.

The global food shortage has by the way been around since early 2021. It was not caused by the Ukraine crisis but, as an October 2021 report says, by high prices following supply chain disruptions during the pandemic:


[T]he food shortage around the world isn’t just a factor of supply chain issues. According to a rapid phone survey done by the World Bank in 48 countries, a significant number of people are running out of food or reducing their consumption. Global food prices have hit a 10-year peak, according to the FAO (Food and Agriculture Organization), driven by gains in cereals and vegetable oils. Despite record cereal consumption, a shortage is forecasted on higher consumption projections.

Guterres’ accusations were copy-pasted from remarks U.S. Secretary of State Anthony Blinken had made in an interview:

Blinken: Ukraine is one of the leading producers of, among other things, wheat in the world. Russia, of course, is a large producer itself. And in Ukraine, there are literally tens of millions of tons of wheat that are stuck there because Russia’s blockading Ukraine’s ports. There are about 85 ships right now with grain, wheat in them. They can’t get out. There are another 22 million tons of wheat in silos near the ports that can’t get there.

Blinken is lying about the port blockade. The Ukraine is by the way currently exporting wheat via railway, Danube barges and then through the Romanian port Constanta. That wheat though is likely to go to Europe.

Blinken is also lying about fertilizers:

Blinken: Now, the reason for that is there’s also a fertilizer shortage because a lot of that is produced in the region. That means that as farmers are thinking about next year’s crops, if they don’t have fertilizer, the yields are going to go down. So there’s going to be even less food on the market and and prices go up even more.

Russia and Belarus are big fertilizer producers. Neither has been hindered to produce by the war. There is therefore no shortage. The only reason the U.S. and ‘western’ countries will not get fertilizer from those countries are the sanctions they have enacted against buying from them.

This passage from Blinken’s interview has a comical element:

Q: You were in Kyiv recently, about a month ago, and you said that Russia is failing, Ukraine is succeeding. What is your assessment now?

Blinken: That remains the case. Here’s what’s important: Putin’s number one objective in going into Ukraine was to erase its independence, erase its sovereignty, to bring Ukraine fully back into the Russian fold, to make it part, in some fashion, of Russia. That’s already failed.

How would Blinken know what Putin’s number one objective was or is? Has he put himself into Putin’s mind? Putin himself has given the reasons for the launching the operation in his Victory Day speech. Ukraine’s independence was never questioned in it.

The next question after Blinken had put himself into Putin’s mind is this one:

Q: How did he get this so wrong? How did he miscalculate this so badly?

Blinken: It’s very hard to fully put yourself in the mind of anyone else.

Q: What are you hearing intelligence wise?

Blinken: Well, we had, of course, very good information about Russia’s planned aggression in the first place, which we shared with the world. A lot of people were skeptical. And it’s one of those things where, as I said, I wish we’d been wrong about it, but we were right. …

When during the winter of 2021 Biden warned of an ‘imminent Russian invasion’ of Ukraine he did not know what Russia’s plans were. What he did know was that the Ukraine was planning, with U.S. help, for an all out on attack on the Donbas republics in February 2022.

Biden knew that no Russian politician could stand back when that were to happen. When you know on what date a war will start it is of course easy to predict when the response to it will happen.

Starting on February 16 Ukrainian artillery attacks on Donbas increased from a few dozen per day to more than 2,000 per day as was dully noted and reported by the OSCE special observer mission. It were these artillery preparations for a full blown attack that pushed Russia towards the preemptive operation in Ukraine.

Login
wpDiscuz
122
0
Would love your thoughts, please comment.x
()
x
| Reply
‹ Back to Categories