New York Times: It’s Not Fair to Send the Illegal Aliens Demanded by East Coast Elites to the East Coast 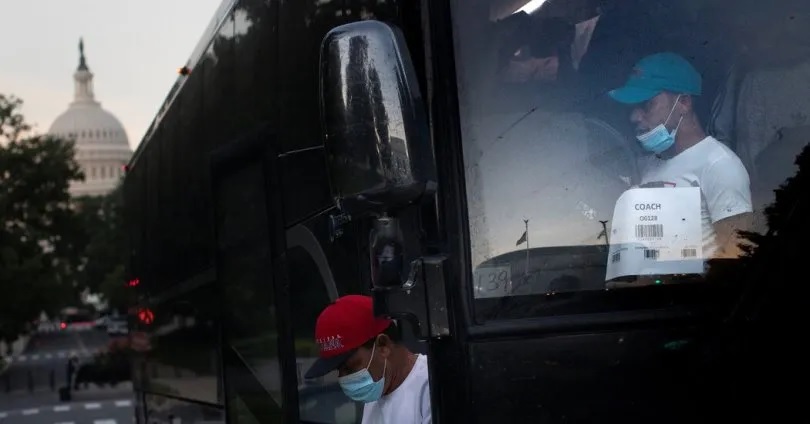 There’s a quote in here that’s going to make your jaw drop.

But for now, just appreciate the first couple of quotes. 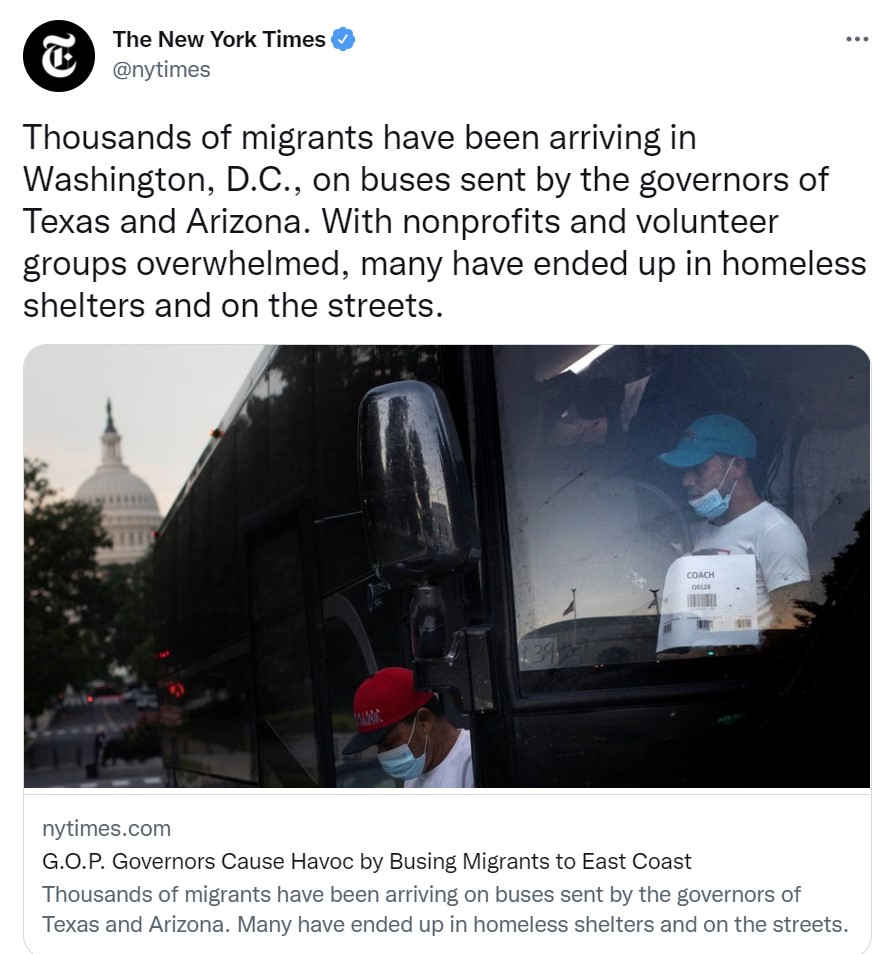 G.O.P. Governors Cause Havoc by Busing Migrants to East Coast Thousands of migrants have been arriving on buses sent by the governors of Texas and Arizona. Many have ended up in homeless shelters and on the streets.

Some of us thought it might be the shitlib president and his shitlib Acela corridor supporters causing the havoc.

WASHINGTON — Lever Alejos was out of money and out of options when he arrived in South Texas last month, after a 1,300-mile journey from Venezuela that culminated with him crossing the Rio Grande in water up to his chin. The Border Patrol quickly arrested him, and after his release, he was offered a choice: a $50 bus ride to San Antonio, or a free bus ride to Washington, D.C., paid for by the State of Texas.

“I wanted San Antonio, but I had run out of money,” said Mr. Alejos, 28, who has no family in the United States. “I boarded the bus to Washington.”

A few days later, he arrived in the nation’s capital, among a busload of weary migrants. He spent the first night in the plaza across from Union Station but eventually found a bed at Central Union Mission, where he hopes to stay until he can apply for asylum, get a work permit and find a job — a process that could take months.

A political tactic by the governors of Texas and Arizona to offload the problems caused by record levels of migration at the border is beginning to hit home in Washington, as hundreds of undocumented migrants arriving on the governors’ free bus rides each week increasingly tax the capital’s ability to provide emergency food and housing.

With no money and no family to receive them, the migrants are overwhelming immigrant nonprofits and other volunteer groups, with many ending up in homeless shelters or on park benches. Five buses arrived on a recent day, spilling young men and families with nowhere to go into the streets near the Capitol.

Since April, Texas has delivered more than 6,200 migrants to the nation’s capital, with Arizona dispatching an additional 1,000 since May. The influx has prompted Muriel E. Bowser, Washington’s Democratic mayor, to ask the Defense Department to send the National Guard in. The request has infuriated organizations that have been assisting the migrants without any city support.

A vast majority of recent bus riders are Venezuelans fleeing their crisis-ridden country, and many have also been arriving in New York, often via Washington. Eric Adams, mayor of New York City, announced emergency measures on Monday to enable the city to quickly build additional shelter capacity. The mayor, also a Democrat, said the city had received 4,000 asylum seekers since May, fueling a 10 percent growth in the homeless population, with about 100 new arrivals each day.

Venezuelans have been showing up daily at the offices of Catholic Charities of the Archdiocese of New York seeking help. “Their primary concern has been a place to stay, food for their children,” said Maryann Tharappel, who directs the organization’s immigrant and refugee services.

“The infrastructure in New York is not built for this,” she said. “We are not on the border.”

There it is. That’s the quote.

This problem, which we are creating with our progressive open borders policies, is a problem we demand remain far away from us, on the border, where the Dirty Grub-People of the red states can deal with it.

We progressive New Yorkers are too chic to have to deal with this riff-raff. Let the Red State Dirties deal with the Shithole County Dirties.

…The situation has led to back-and-forth accusations with the Democratic mayors on the East Coast in recent weeks. In the latest salvo, on Monday, Mr. Abbott sent a letter to the mayors, Mr. Adams and Ms. Bowser, inviting them to tour the “dire situation” on the border with Mexico.”Your recent interest in this historic and preventable crisis is a welcome development — especially as the president and his administration have shown no remorse for their actions nor desire to address the situation themselves,” Mr. Abbott wrote.

The Biden administration agrees: This is a problem for the Red State Dirties to deal with, not the Blue State Swells.

The Biden administration said it had been in touch with Mayor Bowser, but Karine Jean-Pierre, the White House press secretary, said the governors were using the migrants as a “political tool” for their own ends.”There is a process in place for managing migrants at the border. This is not it,” she said, adding that the administration was continuing to expel some migrants, place others in custody and release those eligible to the care of local nonprofits “as they await processing.”

…”This is a crisis created by Republican leaders in other states, however, unfortunately it’s fallen on the mayor to allocate resources locally,” said Brianne Nadeau, the council member who prepared the letter [requesting the release of DC emergency funds].

And it’s a crisis now, huh?

When the Red State Dirties were being forced to deal with the consequences of your decisions, it wasn’t a crisis at all.

When the problem was one you imposed on others, it wasn’t a crisis. Now that they’ve forced you to deal with a fraction of the problem, it’s suddenly a crisis.

Why don’t you find that interesting?

Have you ever heard that bit about how the French newspapers reported on Napoleon’s escape from Elba and march on Paris?

It sounds like a joke but apparently it’s real. The Parisian newspapers changed their editorial slant on Napoleon the closer he came to Paris’ walls.