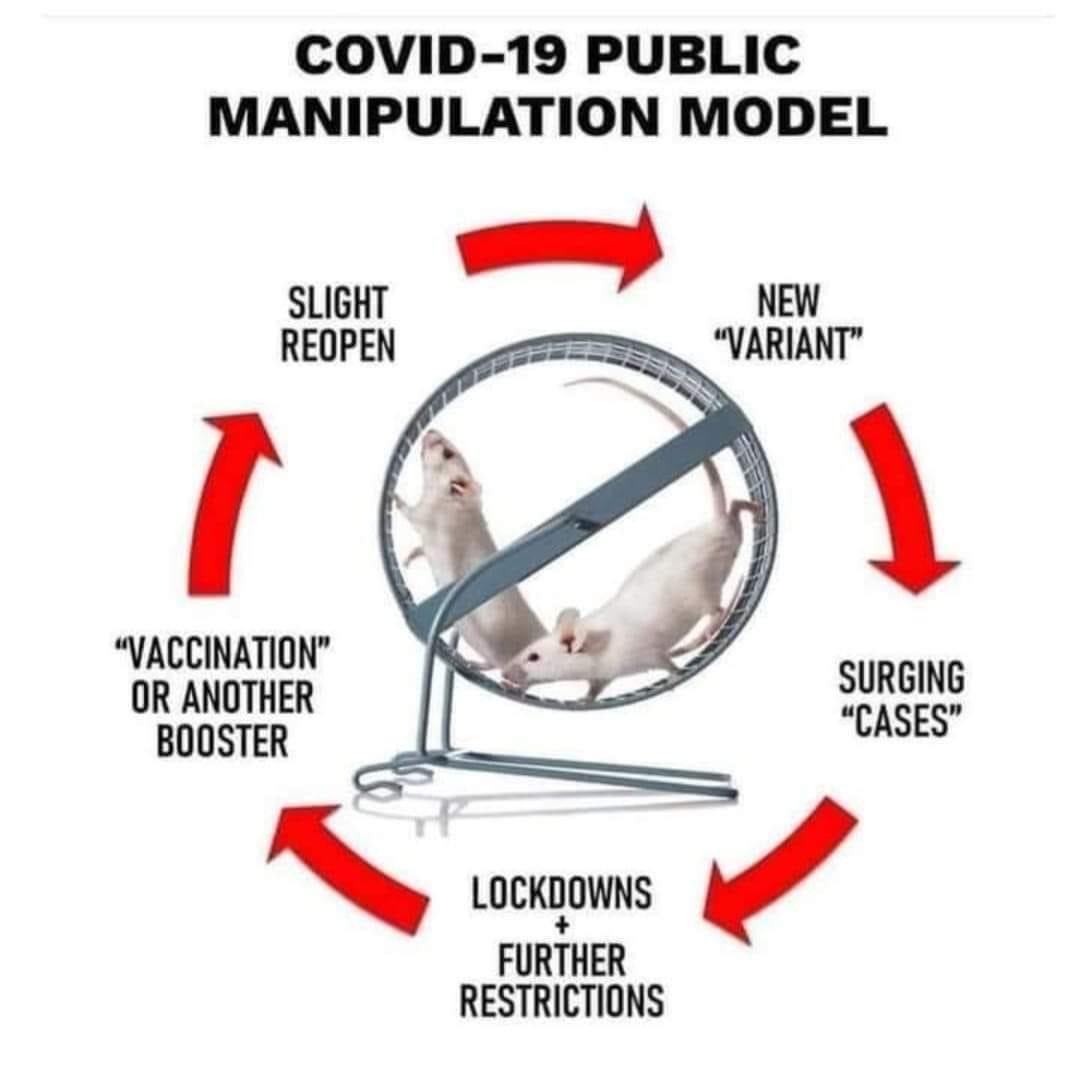 I guess COVID is special because officials freak out when a new COVID mutation comes out. They vomit all the hyperbole they can to keep the sheep scared and in line.

Need proof? When the vaccines came out normalcy started to come back and politicians like Fauci went to the wayside.

All of a sudden, the dangerous Delta variant came around, forcing the politicians back to the forefront.

But now the Delta variant is no longer a concern. People are letting down their guard! They’re starting to go back to normal and not paying attention to politicians.

Fauci and politicians are on the verge of losing their celebrity status! So of course a new deadly variant has been discovered.

The World Health Organization (WHO) attended a special meeting on Friday because of the B.1.1.529 COVID variant that showed up in southern Africa. They’ll need a new name if they want to keep up the panic because that’s a mouthful. It will likely receive a Greek letter.

One scientist described the numerous mutations of this variant as “horrific” and another told the BBC “it was the worst they’d seen”:

It is also incredibly heavily mutated. Prof Tulio de Oliveira, the director of the Centre for Epidemic Response and Innovation in South Africa, said there was an “unusual constellation of mutations” and that it was “very different” to other variants that have circulated.

“This variant did surprise us, it has a big jump on evolution [and] many more mutations that we expected,” he said.


In a media briefing Prof de Oliveira said there were 50 mutations overall and more than 30 on the spike protein, which is the target of most vaccines and the key the virus uses to unlock the doorway into our body’s cells.

Zooming in even further to the receptor binding domain (that’s the part of the virus that makes first contact with our body’s cells), it has 10 mutations compared to just two for the Delta variant that swept the world.

This level of mutation has most likely come from a single patient who was unable to beat the virus.

A lot of mutation doesn’t automatically mean: bad. It is important to know what those mutations are actually doing.

Of course, they worry the vaccine will not work against this variant. Um, duh. Again, why do you think we need a flu shot every single year?

EHRMEHGERD we’re all going to die.

The BBC also had a video explaining why we keep seeing new variants of COVID. We’re not stupid. Everyone knows viruses, like everything else in the world, evolve to survive.

Must Stop ALL TRAVEL

Because, you know, the lockdowns and travel bans have worked so well in the past.

German Health Minister Jens Spahn said, “The last thing we need is to bring in a new variant that will cause even more problems.”

The Japanese government will force Japanese nationals to isolate and quarantine for 10 days and have constant testing when they come home from Botswana, Eswatini, Namibia, Lesotho, South Africa, and Zimbabwe.

In other words, this is never going to end. We all knew once everyone caved, hung onto every word from people like Fauci, and didn’t back down they would find every excuse to keep their power and relevance.

Unfortunately we may hear a lot more about B.1.1.529, aka “Omicron”, in the coming weeks. The more people that contract COVID, the more rapidly random mutations are spun off. People who deny the reality of the danger don’t understand how the natural mechanism works.

And the CRISPR vaccines we have do not stop the spread, do not end the variants.

And stop talking science. You’re an uneducated fool who can’t reason their way out of a paper bag.

Acting on advice from Dr. Anthony Fauci and the Centers for Disease Control and Prevention, the Biden administration will restrict travel from South Africa, Botswana, Zimbabwe, Namibia, Lesotho, Eswatini, Mozambique and Malawi.

Officials, who are still learning more about the variant, said the policy was implemented out of an abundance of caution given the World Health Organization has now identified this as a variant of concern.

“Our scientists and public health officials are working quickly to learn more about this variant,” one official said.

This does not apply to American citizens and lawful permanent residents. As with all international travelers, they must still test negative prior to travel.
—
https://www.cnn.com/world/live-news/new-covid-variant-south-africa-11-26-21/index.html

biden is a racist and is xenophobic

Time to say I will not comply

777 thousand COVID deaths in the US, 5.18 million worldwide, and the possibility that a more dangerous variant has just appeared… At what point should responsible people stop trying to convince others that it isn’t real?

Biden is now responsible for the majority of Covid-19 deaths.

The buck stops with him, and he even had a vaccine.

What a sad, pathetic little man he must have been, to be flipping off the nation’s President on Thanksgiving Day. But the world if full of people who are thankful for nothing, and blame others for their unhappiness. Oddly, they’re often people who have much they should be thankful for.

Hypocrite much? I recall how this just tickled the living shit out of you. NO ONE deserves disrespect more than idiot Biden, who disrespects the entire nation.

Biden has destroyed our nation and is not our president.

The Left are bitter fools bent on genocide.

We withdrawal our permission for the Federal Government to have any authority, so thusly they have none.

Remember where Trump was on Thanksgiving, not bumming off any biillionaires. He flew into a warzone to thank our troops and break bread with them. Now Brandon doesnt pay them
https://www.military.com/daily-news/2021/11/19/navy-pay-delays-have-forced-some-sailors-take-out-loans.html

I wonder if the dunce said the same thing about the woman who flipped off President Trump and the lost her job.

More than 2/3 of the count are flipping biden off daily.

The reason Democrats consistently come up with such terrible candidates is that only a small cadre of elites make the choices. They, like the leadership, have no idea what American thinks, feels, suffers or wants.

The Biden Crackdown on Thought Crimes

An 8th African nation has been added to the US travel ban. The EU, UK, and Israel are taking similar precautions:

And just like that, travel bans were no longer xenophobic.

The pandemic, and the epidemic at home, needs to continue so the totalitarian control over personal freedoms can continue. Democrats here need it to promote fear, like in 2020, of voting in person and reprising their election fraud the rode into the White House. If the don’t… adios, Democrats.

Wow. Glad greg got activated to bomb this post with new propaganda.

Covid-19 is a man-made global crisis released on purpose to cause a complete reset and globalist takeover of the world.

Biden has allowed more people to die from Covid than Trump, and after Trump handed this buffoon a vaccine.

The point of the virus hoax it to keep injecting people with CRISPR mRNA gene engines. To what end after that, I’m not sure.

Jim Jones=need to drink more kool-aid to see how it works. it a ponzi scheme. joseph goebbels would be proud of the media today. works better than the “ministry of propaganda and public enlightenment”. the pedophiles has a costive brain that any amount of evacuant would cause a loss of more aged departed glial brain cells.

So, you put a bunch of crazy thoughts in a blender, and then poured that post out? If we don’t deal with reality, reality is going to deal with us.

The “reality” is that we have a bunch of marxist, authoritarian fools like you to deal with.

You are not American, so I leave you to solving your own nation’s issues.

Did your billionaire cult leader tell you that? The one Flynn suggested could declare martial law and have an election do-over?

Cult leader? like Fauxi giving shut down marching orders that cause suicides? The sheeple begging for guidelines from the all powerful liar?
Why this timing for panic with the Xi variant? It was announced months ago. https://nypost.com/2021/08/30/covid-19-variant-found-in-south-africa-could-circumvent-vaccine-report/
August 30th
Can you see we are on to this BS?

Or
The vaccine is causing these variants.

https://www.reuters.com/world/middle-east/south-african-variant-may-break-through-pfizer-vaccine-protection-vaccine-highly-2021-04-18/
—
In an update to the study posted on April 16, the researchers noted that within the group of people who received two doses, which comprised eight people, all of the B.1.351 infections occurred within a week to 13 days after the second shot. None of them tested positive for it 14 days or more after the second dose.

“This may imply that there is a short window of susceptibility to B.1.351 infection limited to the immediate two weeks after the second dose – but we cannot be confident that this is indeed the case,” Stern and Clalit’s Ran Balicer said in an email to Reuters on Sunday.

The researchers cautioned, though, that the study only had a small sample size of people infected with the South African variant because of its rarity in Israel.

“The B.1.351 incidence in Israel to-date remains low and vaccine effectiveness remains high among those fully vaccinated,” the study said.
—

The vaccine is causing these variants. It isnt a vaccine at all, it neither prevents getting or spreading a virus, no matter how many jabs they order. But the American Heart Association has linked heart damage to the Jab.

There are rare adverse reactions to EVERY vaccine and drug used in modern medicine. There are 15.3 deaths each year for every 100,000 persons that use OTC NSAIDs or aspirin.

If the vaccine were not effective, the vast majority of current COVID hospitalizations and deaths wouldn’t be people who haven’t been vaccinated.