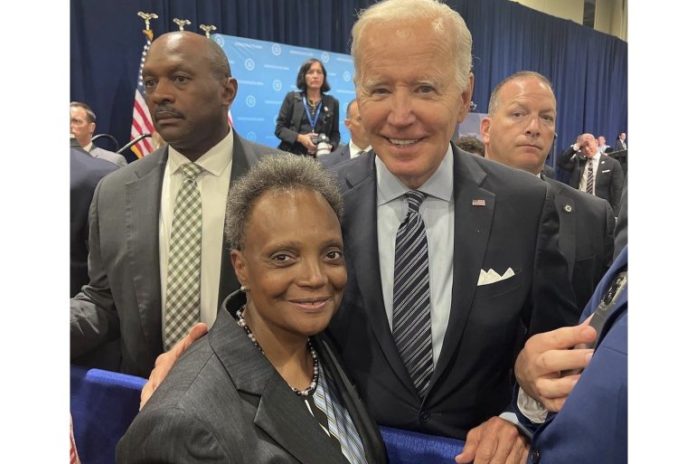 Murder City, USA Mayor Lori Lightfoot tweeted out a rather eloquent quote this past weekend. She wrote, “I’m sick of this sh*t.”

I’m sick of this shit. How many people need to be murdered? How many lives torn apart? Until it actually stops?

Chicago’s problems continue to spiral out of control thanks to woke policies, social justice leadership and a “progressive” prosecutor running the city and its failed criminal justice system. The biggest victims of all of it, of course, are the city’s minority communities . . .

Here are six clear indications that progressive apologetics have undermined public safety, with the toxic effects most deeply felt in Chicago’s black communities.

This mayor, who spends most of her weekends at her home in Michigan rather than in  the city she “governs” can’t bother to tackle the violence plaguing her own city’s streets. But she has plenty of time to wade into a tragedy in Colorado.

This should surprise no one.

Lightfoot is all symbolism and very little substance.  Don’t buy a gun, call 9-1-1 (and wait) instead she tells residents. Instead of hiring more cops, she throws $400 million more at failed “gun violence” prevention programs. Frankly, under a mayor who can’t even label gang violence as “gang violence” and instead pretends it’s “gun violence,” no amount of government deficit spending will fix it.

Yet you could take Lightfoot and place her in any Democrat run city and not notice the difference. This is Democrat “leadership” and governance. Everything is an agenda, an ideological goal. Disarming citizens and eliminating law enforcement in order to pave the way for a centralized totalitarian police state is the left’s goal, and how many innocent citizens get robbed, raped, carjacked, beaten or killed does not matter to them (beyond how it can be politically exploited) one bit.

The Colorado shooter was arrested last year after threatening his Mom with a bomb. He was able to pass a background check because his charges were dropped. Colorado also has a red flag law. Before you talk about passing new gun laws, maybe the ones on the books should be enforced

The shooter in Colorado Springs was arrested a year ago for felony menacing and first degree kidnapping. The DA decided not to pursue charges. This is yet another case of a violent criminal set free to cause more harm. But the Left has no interest in taking about this problem.

If she were really sick of it she’d fund enough police that the response time in minority areas of Chicago is FOUR TIMES SLOWER than in affluent neighborhoods!
She’s had HOW many murdered this year?
653?
Astounding!

Sorry but if you're on the Left then you have no right to deny the shooter's non-binary identity. You set a precedent here and we will hold you to it. You have to respect his identity. I don't. You do. These are your rules. Now take your medicine and shut up.

You have already made it clear that if a male criminal comes out as a woman and is transferred to a women's prison, we may not speculate that his trans identification is a ploy to gain access to female inmates. Same for men in women's locker rooms.

Your rules are clear: ALL self-identities are valid and cannot be questioned, ever, under any circumstances. Again: your rules. You are stuck with this. The shooter is non-binary. You have no choice but to accept it. Sorry.