Loudon School Board Ends Public Comment To Avoid Being Criticized by Parents Who Have Every Legal and Moral Right to Criticize Them, Then Calls the Cops to Arrest Them 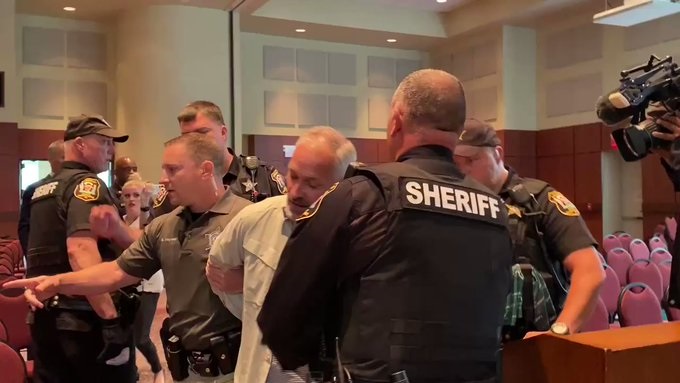 The government seems to be making more and more insurrectionists every single day.

Good job, government! Way to work out the math, Experts!

The Loudon School Board did what every tyrannical leftist-controlled organization did: they called the cops and had the protesters — here, they weren’t even protesters; they had every right to attend the meeting — arrested by their fellow government agents, the police.

BLM and antifa are given “space to destroy;” parents with a critique deemed “right-leaning” aren’t even allowed to make public comments at a… public comment school board meeting.

Parents protesting against critical race theory broke into the national anthem when the Loudoun Co., Virginia school board ended public comment because the crowd got too out of hand pic.twitter.com/qms00grIIj

Two arrests made at the Loudoun County, Virginia school board meeting after it was declared an unlawful assembly and some parents here to protest against critical race theory and a transgender policy refused to leave right away #CriticalRaceTheory pic.twitter.com/dsZDrqJ0Gp

As you can see, the official story is that public comment had to be ended because the parents were “unruly.”

Oh, they were unruly?

BLM “protesters,” who are definitely not insurrectionists, start an uncontrolled fire outside a South Carolina police station.

Weird, I don’t see any arrests being made for the arson and terrorism.

… and the Democrat party salivated watching the police state in action. I wonder, can the left make up their mind? Is CRT something being misunderstood by conservatives and worthy of being defended or is it a figment of Republican’s imagination? Like ANTIFA, when Democrats are confronted with something they want to use but don’t want to explain or defend, they claim it doesn’t exist despite what you see and hear.

wow, took 6 cops to arrest and restrain this guy. School boards are cesspools of autocracy and the quintessence of a true dictatorship. the plurality of board members in most districts are demorat. Ex., in ohio the requirments for a board member: live in the district, no major criminal record, registered to vote, and the biggie “have an interest in the community”. WOW! but the biggest dictator is the superintendent. There are only a few states where this position is voted in, most are ass kissing libs that are appointed by the state educational dept and approved by a the gov. one can only imgaine the ass kissing and boot licking in NY. all school boards have a Rambo types who bullies his/her way to the chiar position. most school boards are liberals. Average school board meeting with no major tasks last less than 20 min.