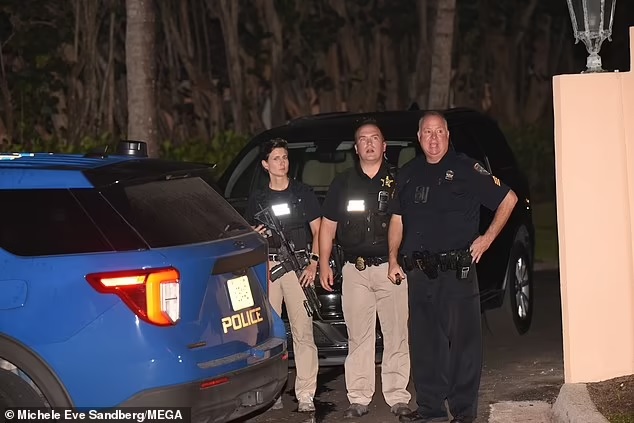 By KATELYN CARALLE and MORGAN PHILLIPS

The Department of Justice was ordered on Wednesday to respond to motions to unseal the warrant used in the FBI’s raid of Donald Trump’s Mar-a-Lago home.

Order follows revelations from the former president’s son Eric Trump in an interview with DailyMail.com that the FBI did not hand over a copy of the warrant to a lawyer on the Florida property at the time of the raid.

Magistrate Judge Bruce Reinhart, who allegedly signed and approved the unprecedented search, said the DOJ must file by Monday a response to motions to unseal the document from the Albany Times Union and conservative group Judicial Watch.

Reinhart said the DOJ’s response may be redacted ‘as necessary to avoid disclosing matters already under seal.’

Appointed to his current position in 2018, Reinhart, recused himself in June from a lawsuit between Trump and Hillary Clinton because of ‘personal bias.’

At the time, Trump was suing Clinton, the Democratic National Committee (DNC) and other political entities for promoting stories alleging he had colluded with Russia during the 2016 campaign.

On Monday dozens of FBI agents descended on Trump’s Mar-a-Lago estate as part of a probe into whether he took classified records with him upon leaving the White House.

The raid immediately led to intense backlash from Republicans and continues to face questions from the right over whether it was conducted properly.

‘Biden’s DOJ obtained the warrant to raid President Trump’s home,’ Ohio Representative Jim Jordan lamented in a Wednesday tweet. ‘That’s the same DOJ that approved the use of the Patriot Act to spy on parents protesting at school board meetings.’

GOP Representative August Pfluger from Texas demanded answers in a tweet, saying: ’48 hours and still nothing from the FBI and DOJ on the raid of President Trump’s home.’

‘The country has been left to speculate on this extreme action. How is this serving justice?’ he questioned.

Judge Reinhart cited in his June 22 recusal part of U.S. code requiring magistrate judges to disqualify themselves from cases if they have ‘personal bias or prejudice concerning a party, or personal knowledge of disputed evidentiary facts concerning the proceeding.’

Reinhart did not specify whether his personal bias was toward Trump, Clinton or any of the dozens of defendants in the lawsuit.

The judge also has some connections to notorious sex offender Jeffrey Epstein.

In 2008, Reinhart vacated his post as an assistant U.S. attorney and the next day started representing some of Epstein’s employees. Two of the accusers filed a lawsuit accusing Reinhart of leaving the Justice Department to give Epstein inside information.

Reinhart denied the allegations in 2018, but shortly after his connections to Epstein went viral, the U.S. Court for the Southern District of Florida removed the judge from its website.

In 2018, Reinhart was appointed by district judges to his current post as a magistrate judge.

While agents would typically provide people with a copy of their warrant, Eric claimed they would not hand over the document and only would show a copy to lawyer Christina Bobb from 10 feet away.

Speaking exclusively to DailyMail.com, the former president’s son said the 30 agents who arrived at the property asked staff to turn security cameras off – but they refused.

He also said that Trump’s attorney Christina Bobb was forced to stand at the end of the Mar-a-Lago driveway while the team searched inside – and allegedly used safe crackers to break into his father’s safe.

‘There’s 30 agents there,’ he recalled of the Monday search in a phone call interview. ‘They told our lawyer… you have to leave the property right now. Turn off all security cameras.’

The claim is at odds with what Bobb told the New York Times – that she received a copy of the warrant. Bobb said agents removed about a dozen boxes from the property.

Bobb also told Real America News on Tuesday that she was able to see the warrant, however, she claimed that it was partly sealed, making it impossible for her to see what the probable cause was that compelled a judge to approve the raid.

She also did not suggest that she received a physical copy of the warrant.

‘When I arrived and kind of announced myself as the legal representation for President Trump, I asked to see a copy of the warrant,’ the Trump lawyer detailed of the Monday events.

‘Initially they refused and said, ‘You know, we don’t have to show it to you.’ And there was a little bit of an exchange about whether it was appropriate to withhold the warrant when you’re searching the residence of the former president, who’s likely to be the Republican nominee in the next election,’ she added.

‘Though they conceded and let me see it, they did not give me a copy of it right away, but they did let me see it,’ added Bobb, who once was a host on the far-right One America News Network.

The FBI declined to comment to DailyMail.com on the raid and Eric’s claim no search warrant was handed over to Trump’s legal team.

Donald Trump lamented Wednesday that the FBI blocked his lawyers from the property during the raid at his Palm Beach, Florida residence and suggested that agents may have ‘planted’ evidence.

‘The FBI and others from the Federal Government would not let anyone, including my lawyers, be anywhere near the areas that were rummaged and otherwise looked at during the raid on Mar-a-Lago,’ Trump posted to his Truth Social page on Wednesday morning.

‘Everyone was asked to leave the premises, they wanted to be left alone, without any witnesses to see what they were doing, taking or, hopefully not, ‘planting,” he continued while placing doubt that the raid was conducted properly.

Earlier this year the National Archives and Records Administration said it took 15 boxes of records out of Mar-a-Lago, roughly 12 months after Trump left office. Some of those files were apparently labeled ‘classified.’

The National Archives had asked the Justice Department to look into the ex-president’s potential mishandling of top secret documents, it was reported in May.

Four top DOJ officials traveled to Mar-a-Lago in early June to speak with the former president’s attorneys about the documents, it was reported by CNN the day after the FBI raid.

In lieu of Impeachment, because Democrats have no honor and are paid to promote profit for their donors, not for the Will of the American People, a Convention of States must be held to simply remove Biden from office, for treason, incompetence, and taking the office illegally.

Not the purpose of a COS, If they remove him as incompetent all his executive orders are N&V they cant have that most if not all push agenda 2030. Im thinking they will off him with the heart attack or stroke. Must be getting close with the Covid then covid again to keep him from the public eye. Pedo Pete is a veg, a spaz it must be a nightmare managing it.

We now know Trump was not legally served, the raid was showboating and poorly executed to boot, what was the Soros group thinking were they friggin’ high?

Why is it that all Democrats and their associates are either scumbags or connected to scumbags?