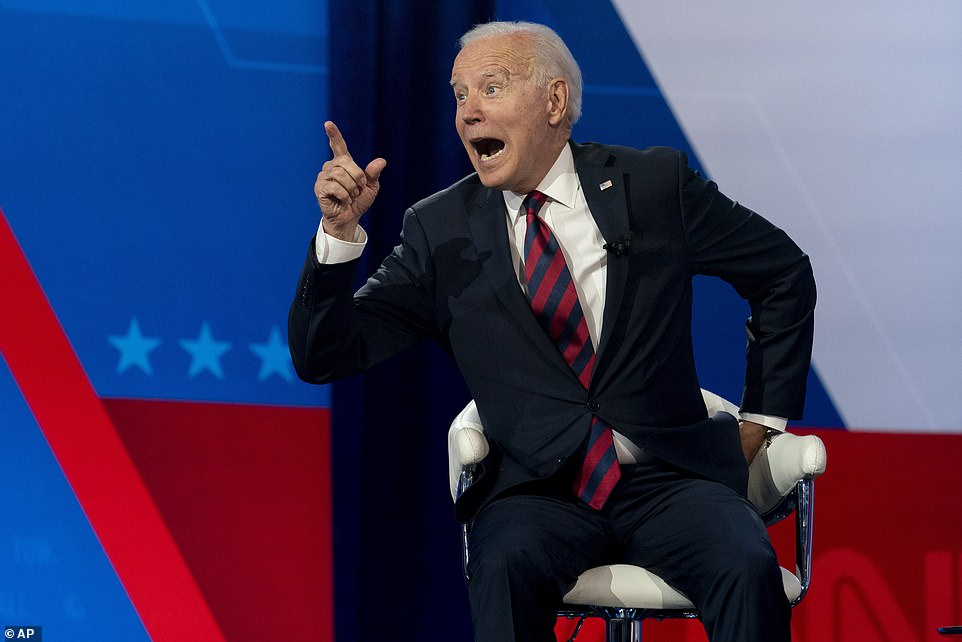 His brain is “stuttering.”

Word of Biden’s dementia has reached the UK.

‘The experts say we know that this virus is, in fact, uh, um, uh, it’s going to be, or excuse me’: Biden loses his thoughts on vaccines, flubs answer on his foreign policy work and falsely tells town hall you WON’T get COVID if you have the shotPresident Joe Biden stumbled through Wednesday night’s CNN town hall when he issued a series of gaffes, lost thoughts and false statements

He also said no vaccinated individuals will be hospitalized, sent to the ICU or die
Biden repeatedly gave confusing, misleading and non-linear answers when discussing masks, national security issues and COVID-19 vaccine approval

There are breakthrough cases of coroanvirus in vaccinated individuals, and some cases result in death — thought the rate much higher in the unvaccinated

Biden revealed unvaccinated children, including all those under 12, will have to wear masks in school when CDC releases new guidance

…Joe Biden overinflated the efficiency of vaccines, especially against the Delta variant, during his gaffe-filled town hall on Wednesday where he claimed the jab will prevent Americans from contracting coronavirus.

‘We’re not in the position where we think that any virus, including the Delta virus, which is much more transmissible and more deadly in terms of unvaccinated people, the the various shots that people are getting now cover that,’ Biden said during a CNN town hall in Cincinnati, Ohio on Wednesday.

Why does the left have a permanent pass on “misinformation”?

Section 230 contains a “good faith” requirement as to a company’s own censorship decisions.

This is not “good faith.”

Or it’s government coercion. Either way, this cannot stand.

This statement is false considering many vaccinated Americans have contracted coronavirus, as well as been hospitalized and fallen fatal to the disease.

…Biden struggled at some points during his town hall to complete statements coherently as he lost his train of thought on multiple occasions.

…At one point, when talking about getting vaccinations approved for children under the age of 12, the president said: ‘That’s underway, just like the other question that’s illogical. And I’ve heard you speak about it because you always — I’m not being solicitous — but you’re always straight up about what you’re doing.’

‘And the question is whether or not we should be in a position where you uh, um, are — why can’t the, the, the experts say we know that this virus is, in fact, uh, um, uh, it’s going to be — or, excuse me, we, we, we know why all the drugs approved are not temporarily approved by permanently approved. That’s underway too. I expect that to occur quickly,’ Biden continued as he fumbled over his words.

‘You mean for the FDA,’ Lemon clarified.

Biden replied: ‘For the FDA’

People complain about Trump’s boastfulness — but he’s a piker compared to the serial braggart and liar Biden.

When speaking about national security, Biden also lost his words when declaring his qualifications to speak on the matter.’And I’ll say one last thing: You’re going to — I’ve had a lot of experience internationally and — I mean, not good or bad, just I have — I chaired the Foreign Relations Committee, I’ve been deeply involved,’ he said.

‘I did national security for our last the administration with Barack,’ he said. ‘But folks, the rest of the world’s wondering about us. Those of you who travel abroad, it’s not a joke. Not a joke.’

He continued to ramble in saying: ‘Ask — you know, when I went to this G7, all the major democracies. I walked in and go, ‘America’s back.’ I’m serious, heads of state. I give you my word as a Biden. They said, ‘Are you really back?’

I don’t want to take more from the Daily Mail, but I recommend clicking on the link and looking to the right sidebar material, the area shaded in light blue, which contains verbatim transcripts of Biden’s incoherent, Sundowning “answers.”

Response to question on how to prevent misinformation’There are trusted interlocutors. Think of the people — if your kid wanted to find out whether or not there were — there’s a man on the moon, or whatever — you know, something, or, you know, whether those aliens are here or not — you know, who are the people they talk to beyond the kids who love talking about it? They go to people they respect, and they say, “What do you think?”‘

By “trusted interlocutors,” I imagine he means the staffers he has coercing the Tech Monopolies to censor and deplatform dissident speech.

Biden also doubled down on his “just pay more” non-solution to a non-working workforce — people are absentees from available jobs, because Professor Science over here is paying them not to work.

Since last year, COVID-19 unemployment benefits have been $300 more per week than in the past

Across the country, restaurant owners are slamming Sundown:

EXCLUSIVE: Do you want to pay $50 for a hamburger, Joe? Furious restaurant owners vent at Biden for telling them to raise wages which they say will lead to MORE inflation and drive them ALL out of businessOn Wednesday night, Biden told restaurant worker John Lanni to increase his staff’s wages to survive

In New York City, the minimum wage is already $15 — if it goes higher, owners will have to increase prices

New jobless claims jumped to 419,000 this week — the highest in two months

There are still more than 12million people claiming unemployment in America; in 2019, the number was 5.8m

John Stratidis, the manager of the The Famous Cozy Soup ‘n’ Burger diner in Manhattan’s Greenwich Village, said it could people out of business

They called his remarks ‘patronizing’, ‘out of touch’ and demonstrative that he’s never run a business

Yes, they’re “considering” the “opportunity” of simply living on the Biden Dole forever.

Speaking of shiftless layabouts collecting money for doing nothing: