It Is Official–the DOJ Is Weaponized 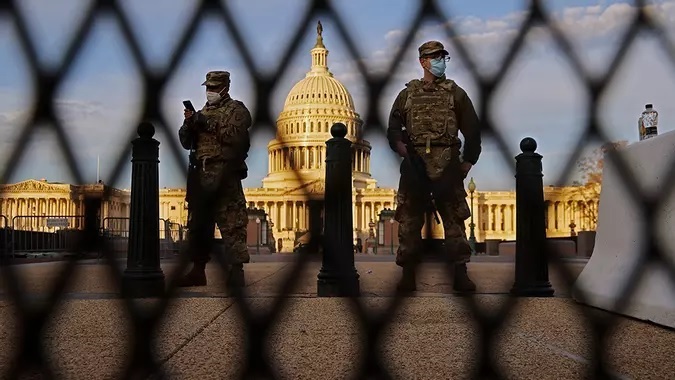 Two of five people charged with “seditious conspiracy” for attending the rally for Trump on January 6, 2021 have been convicted by a Washington D.C. jury in a political trial with more resemblance to Soviet-era trials than to American justice. All five of the defendants were convicted of obstructing an official proceeding.

Widely misreported by the media including even RT as a “riot at the US Capitol,” the small disturbance was provoked by federal agents who had infiltrated those present.

We know from abundant videos that the police opened the doors and allowed people to enter the Capitol. Those who entered were peaceful and wandered around, as videos show, before leaving. A couple of people took selfies of themselves sitting in Nancy Pelosi’s chair. This was turned into a seditious conspiracy against democracy.

Consider as well that the rally was supporting those Republicans in Congress who insisted on presenting the evidence of the stolen election to Congress prior to the confirmation of Biden as the winner. The Trump supporters had no interest in disrupting this presentation. It was this presentation that the orchestration of conflict at the Capitol was used by the Democrats and the Rino Republicans such as Mitch McConnell to prevent. I don’t think that Trump and his supporters at the time understood that the Republican Establishment is as opposed to Trump as are the Democrats and the presstitutes. Trump’s presidency was unsuccessful, because Trump appointed and surrounded himself with Rino Republicans. He staffed his administration with his opponents.

You can see the hostility of the Republican Establishment against Trump in their support of the Democrats’ claim that the midterm election was a repudiation of Trump and the Republican candidates that he supported. The inconsistency of the Trump candidates sweeping their primaries only to have the same voters turn against them in the general election is quietly passed over.

The evidence against convicted Oath Keeper Stewart Rhodes is that he is an “election denier” and predicted that the disregard of half of the voting population was leading to civil war. Prior to the trial, the media had turned “election denial” and Oath Keepers into “threats to democracy,” so when a D.C. jury, almost assuredly all Democrats, was seated, the verdict had already been set in stone.

Now I will proceed to the main point.

By succeeding in conflating in jurors minds freedom of association and freedom of speech with seditious conspiracy and obtaining convictions of sedition with no evidence of armed violence and no evidence of any plans to “threaten democracy,” the DOJ has established a precedent for going after Trump with the same charges. Already the Attorney General Merrick Garland has appointed a Democrat special prosecutor to put together a criminal case against Trump from “investigations” of Trump’s alleged possession of national security documents and Trump’s alleged role in the January 6 “attack on the Capitol.”

All of this is abject nonsense. At any time in US history before the last few years, it would have made laughing stocks out of the Department of Justice, Democrat Party, and media. But not today.

It’s been official since the Obama years, when this country was “fundamentally transformed” into an authoritarian state.

Trumps legal election and successful three-year term made them come of out the shadows and leave no doubt:

Our Republic died awhile ago, and we are now ruled by a fascist state (foreigners/companies install the politicians, they get them rich, then donate more, etc.).

Where is Ray Epps?

-2
Reply
Deplorable Me
Reply to  Greg

He doesn’t have to hide. He is sitting on his ranch, protected by the DOJ.

There’s nothing hidden. The Deep State installed our “presidents.”

And they got caught…

you mean the octogenarian , narcissistic, demented, career pedopile who trippes up the steps to AirForce One, craps his pants in front of the pedophile pope, farts and laughs in front of the queen, hid in his basement, and declared limited hours of time on the campaign trial.