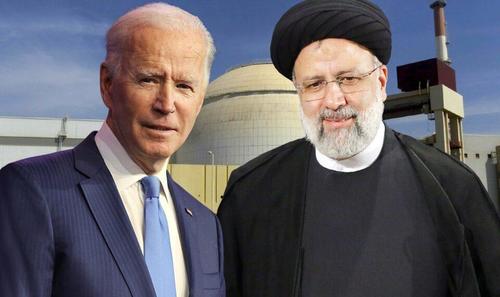 
In his first press conference since his landslide victory in Friday’s national election, Iran‘s president-elect Ebrahim Raisi on Monday said he’s not willing to meet with President Biden at any point nor is he willing to negotiate on the Islamic Republic’s ballistic missile program.

But crucially he did endorse ongoing efforts in Vienna for a restored JCPOA nuclear deal, stressing that Washington must immediately ease and drop sanctions in fulfillment of its own original obligations under the deal. “The U.S. is obliged to lift all oppressive sanctions against Iran,” he stressed.

Raisi gave a quick and simple “No” when asked about a potential future meeting with Biden in connection to nuclear deal negotiations. The Associated Press described that “He frowned and stared ahead, without elaborating. His moderate competitor in the election, Abdolnasser Hemmati, had suggested during campaigning that he might be willing to meet Biden.”

Relatedly White House press secretary Jen Psaki reiterated that the US currently has no diplomatic relations with Iran, nor or there “any plans to meet at the leader level, so it’s unclear that anything has actually changed on that front.”

Interestingly, she added the caveat that the White House regardless understands the person to meet with would not be the Iranian president in such an instance, but that the “decision leader is the supreme leader. That was the case before the election; it’s the case today; it will be the case probably moving forward.”

After Raisi’s victory, and with the more “moderate” Rouhani now on his way out (with his term ending August 3rd), the Biden administration has made clear it hopes to finalize a restored nuclear deal in Vienna prior to Raisi taking office.

The Iranians realize the idiot Biden is even weaker than Obama, who caved on everything. The UN had banned Iran from developing ballistic missiles but they just went ahead and did it. Just like the cheated on the flawed and failed Iranian nuclear deal itself, any subsequent deal will not restrict the Iranian’s acquisition of nuclear weapons to use against Israel one tiny bit.

This is the kind of real harm and damage allowing election fraud brings.