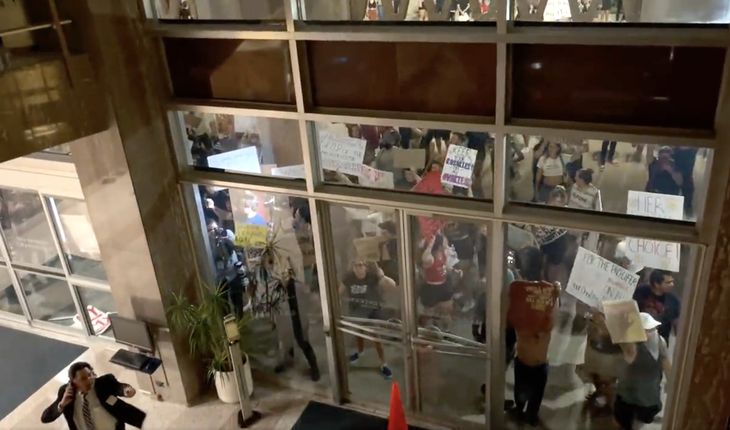 The Arizona State Senate was going about routine business on Friday evening, voting on a water bill and another bill to expand the state’s private school voucher system, when the pro-abortion zealots arrived. “While working inside,” Arizona state representative Sarah Liguori recounted, “we were interrupted by the sound of bangs and smell of tear gas. Protestors cleared from the Capitol.” Ironically, Liguori herself is pro-abortion; earlier Friday she tweeted, “I’ve been talking to confused and scared physicians, nurses, and women this morning. Our Supreme Court has failed us all by dismantling a human healthcare right in favor of religious extremism.” But when her more violent compatriots attacked, Liguori was trapped inside with everyone else targeted in this — what’s the word for it again? Ah, yes — insurrection.

The scene was harrowing. At 11:56 p.m. Friday night, Arizona state senator Kelly Townsend tweeted, “We are currently there being held hostage inside the Senate building due to members of the public trying to breach our security. We smell tear gas and the children of one of the members are in the office sobbing with fear.” A half-hour later, she added that some of her Democrat colleagues were pleased as punch that it was all happening: “Appalling to hear some Democrats defending those outside trying to break the glass and breach security. ‘This is a public building, and they wouldn’t let them in.’” At least the rejoicing in chaos and violence wasn’t unanimous: “However another Democrat mad as heck for them scaring the children in the building.”

Three minutes after midnight on Saturday, another Arizona state senator, Wendy Rogers, tweeted, “Education protesters threatened to break the AZ Senate entryway glass. We assembled to take tunnel to the House. Crowd was dispersed w/ tear gas. Went back up into the Senate.” At 12:41 a.m., she clarified, “Protesters are a mix of anti-life protesters, anti-education choice protestors and Antifa. MANY DPS officers on the scene taking care of business.” She also noted, “DPS [Department of Public Safety] is working to get the situation under control outside. Sergeant at Arms says the mob is spray painting monuments and lighting fires. We are headed to a secure room to go vote. Very dangerous outside.”

Townsend also tweeted, no doubt with tongue firmly in cheek, “I expect a J24 committee to be created immediately.” In a truly just and equitable society, there would be such a committee, but in America today, there is one set of rules for Leftists and another one for those who dissent from the Left’s agenda, and nothing is more certain than that these violent thugs will face no consequences whatsoever for their actions.

Kim Quintero of the Arizona State Senate Republican Caucus released a statement saying, “Violent pro-abortion protestors’ attempts of an insurrection at the Arizona State Senate were thwarted Friday night, thanks to the swift actions from local and state law enforcement. While Arizona State Senate members were wrapping up passing important legislation for the session extremist demonstrators made their way to the entrance of the Senate building and began forcibly trying to make entry by breaking windows and pushing down doors.” Welcome to politics as usual in the United States, 2022.

The overturning of Roe v. Wade has been illuminating on numerous levels. One is that it demonstrates yet again how Leftists and conservatives operate in America today. Leftists suffered a defeat with the Dobbs decision, and the calls for violence have begun. Conservatives suffered a defeat back in 1973 with the Roe v. Wade decision and worked patiently and persistently to bring about the overturn of that decision by peaceful and legal means.