Incredibly, Noted Warfighter (TM) David French Attempts to Take Credit for Overturning of Roe and Casey– Despite Fact He Actively Campaigned for Both Hillary Clinton and Joe Biden, And Would Have Installed a 6-3 Leftwing Court If He’d Had His Way 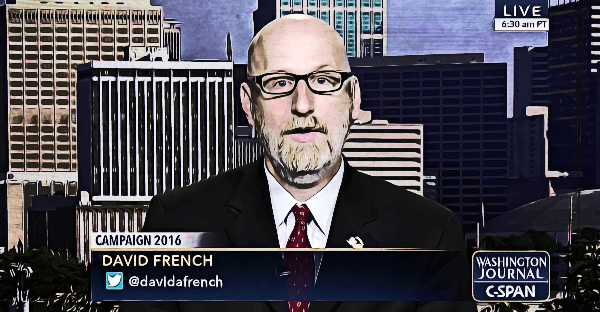 The balls he lacks in his marriage he discovers on Twitter. 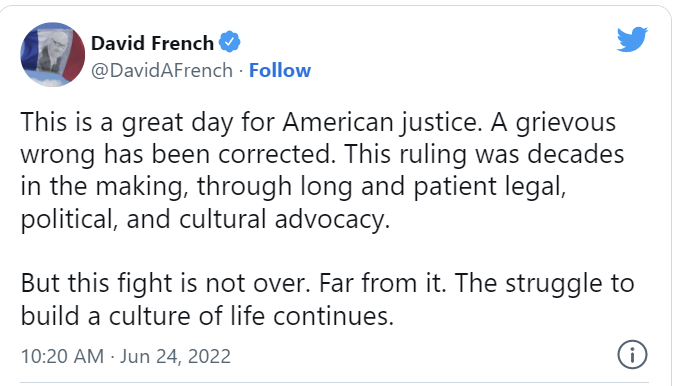 This day only happened because you didn’t get your way. I’m glad that you are happy, and we should all join in celebrating, but some admission that you were wrong would be nice before immediately trying to present yourself as a leader in the struggle.

So thankful your anti-Trumpist obsession and damaged ego failed to keep the country from this moment. If you had gotten your way, this day would have never happened. You should repent for your continual slanders against those who had far more courage and wisdom.

“Decades” in the making–only you would attempt to take credit for something that never would’ve happened without President Trump. And you�re so graceless you can’t bring yourself to credit him.

If you had gotten your way in November 2016, this day wouldn’t have happened. You actively encouraged voters to roll over for the election of a president whose justices would have saved Roe. Today is a day for you to hang your head in shame. 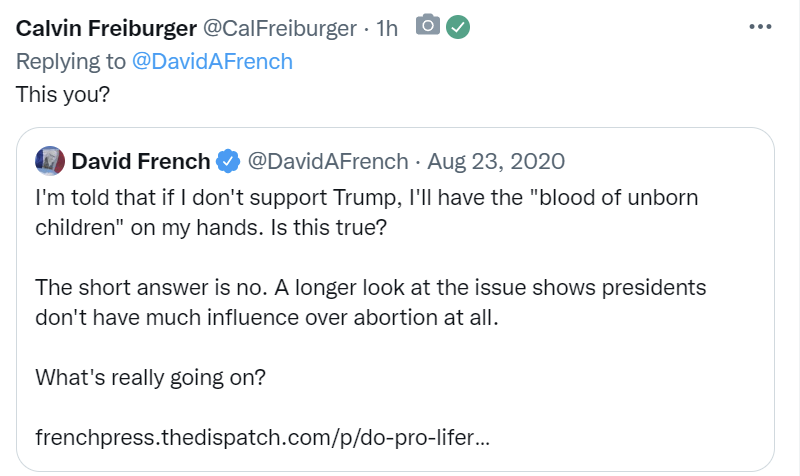 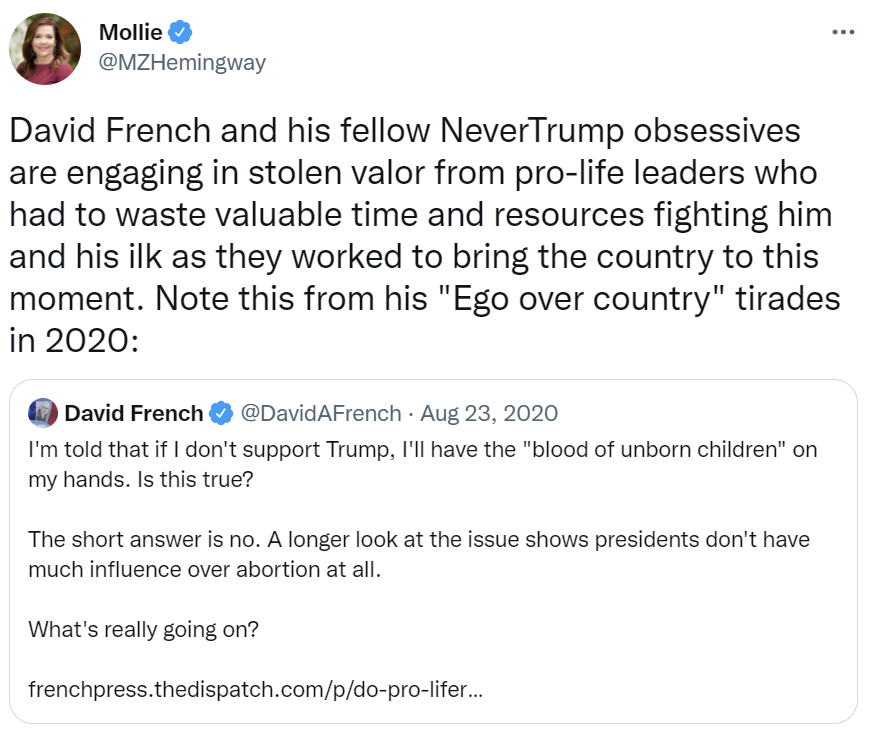 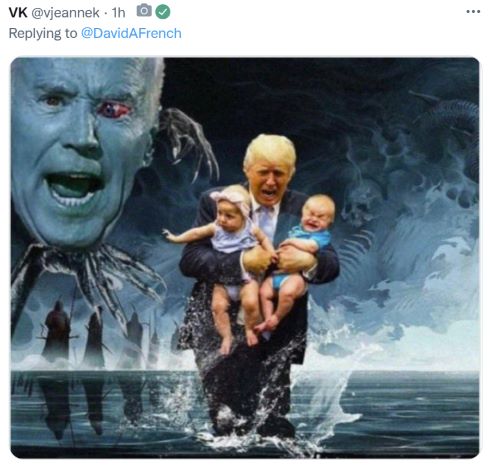 This success is a catastrophe for NeverTrump, which is now engaging in coordinating messaging to credit “Conservative, Inc.” with the victory: 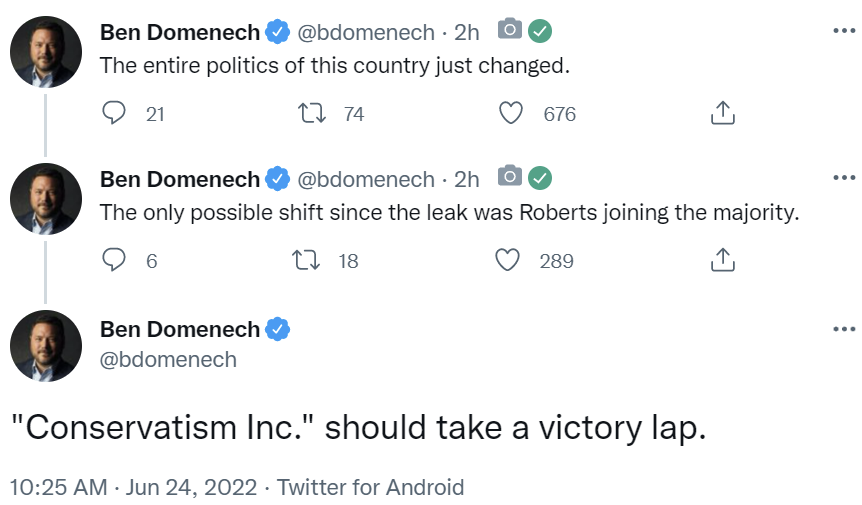 Um, Roberts was already supposedly willing to vote with the majority as far as the Mississippi ruling itself, possibly in a strategic ploy to split off someone from the majority to overturn Roe. He did not join that majority.

Your claim that “Conservative, Inc.” should take a bow is desperate. You sound fucking drunk. 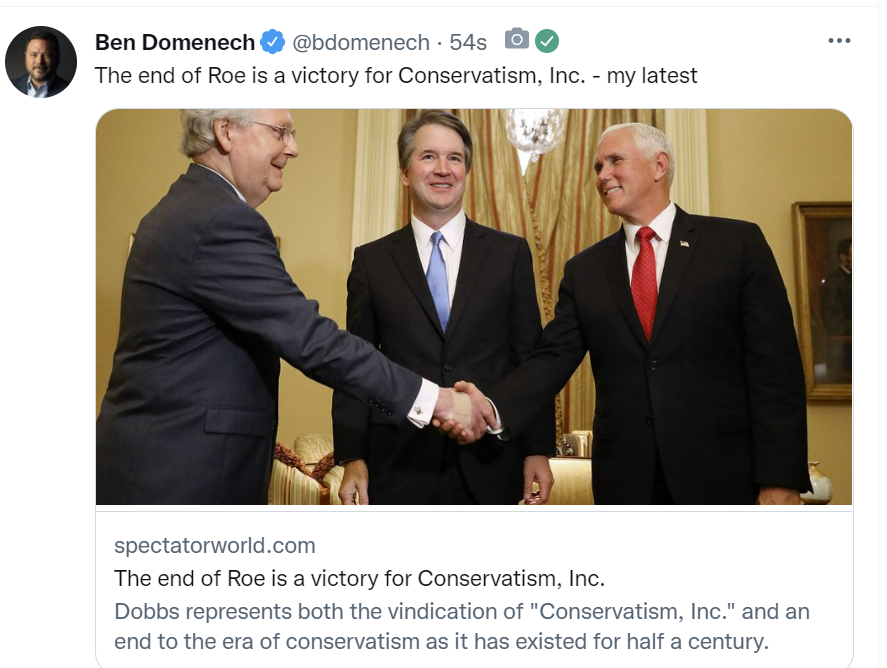 The cvcks’ message of the day is that Conservative, Inc. is to be credited for this, because the Federalist Society passed names to Trump. And so they should get credit, rather than Trump.

Of course, they ignore the fact that they also recommended Roberts.

A lot of people owe apologies which will never, ever come — not to Trump, I know that’s too much for these children who have not yet gotten over their Twitter tantrums of 2015-2015.

But they owe apologies to the rest of us, for stabbing us in the back and maligning us as we were attempting to actually do something important, something that would actually change the political terrain, instead of just writing meaningless snarky essays accusing Democrats of Hypocrisy! (oooh very well played!!!) and collecting checks from our masters.

Note that Ben Shapiro wrote this after Trump secured the nomination, so at this point, he wasn’t arguing for some other conservative candidate to beat Trump.

He was just trying to depress the Republican voting base