In Chicago, Couple Pulled Out of Car and Shot; Democrat PAC Founder Says That If the Couple Had Been White, the Execution Would Have Been Justified 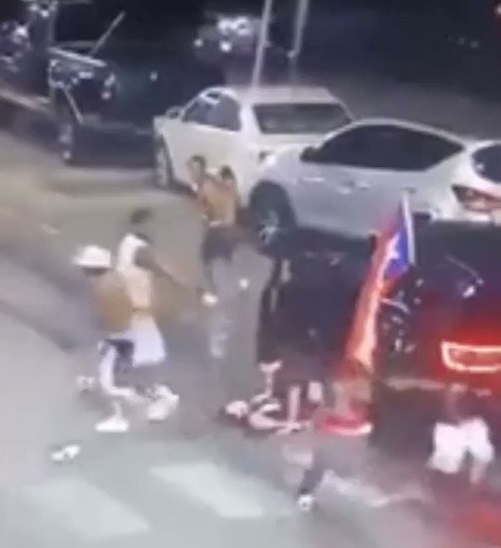 The couple were driving around showing the Puerto Rican flag. It was Puerto Rico day in Chicago, so there’s nothing “provocative” about that.

It’s not known yet why the man was murdered, and the woman left for dead.

A group of men converged on a couple who were celebrating the Puerto Rican People’s Day Parade in Chicago and allegedly shot them in a horrific incident that was originally caught on Facebook video.The assailants numbering about six allegedly dragged the couple out of their vehicle, which was displaying the flag of Puerto Rico, and opened fire in the incident that occurred in Humboldt Park.

Victim Gyovanny Arzuaga, 24, a father of two young children, was rushed to a local hospital where he tragically died from a gunshot wound to the head. Yasmin Perez, 25, who was shot in the neck, is listed in critical condition. The suspects are reportedly still at large, and detectives are investigating, ABC 7 reported.

You may have seen the horrifying video of a man and woman being dragged from their car and shot yesterday evening. Man died, woman critically injured. This is the last photo the man, Gyovanny Arzuaga, posted to Facebook yesterday afternoon. He was 24. #Chicago pic.twitter.com/1ugwc01ALK

Couple taken out of their car in Chicago last night, shot, because remember, “white supremacy” is the real threat to the country. pic.twitter.com/VEgIhBA79g

Now, the racist moron who founded the “Democracy Preservation Initiative” PAC confused the Puerto Rican flag for the confederate flag, and then opined that the couple got what they deserved.

When his error was pointed out, he doubled down on the hypothetical: Well if the couple had been white and flying the confederate flag, their murders would be justified.

According to the founder of the award winning Democracy Preservation Initiative, it is absolutely okay to drag white people out of their cars and execute them in front of their children

I'm sure these people will come around now that the Republican Party has gone woke, right? pic.twitter.com/HUJvuLsWAJ

Meanwhile, the left seized upon the instance of a drunk gay man accidentally driving into the LGBT “Pride” parade in Fort Lauterdale — and immediately deemed this a white supremacist attack on LGBTs.,

Without evidence. Without any facts at all.

There will be no deplatformings or shadowbannings for the left when they spread hateful, mob-violence-encouraging disinformation, of course.

I hope @DeanTrantalis gets sued and then removed from office or defeated. Government officials shouldn’t be able accuse someone of *terrorism* so flippantly without facts. pic.twitter.com/E7cjgGxb2V

If the Mayor had waited even 15 minutes, then he could've made a reasoned statement. Video of the arrest showed the driver wearing a gay men's chorus t-shirt, which was more than enough to sew reasonable doubt about the intent of the driver.

Leftists (including blue-checks and Democrat spokesmen like Chris “The Aggressive Progressive” Hahn) were spreading the Without Evidence claim that the drunk driver was “targeting” Debbie Wasserman-Schultz, who was at the parade, so that is probably who this disinformation spreader and likely Russian Agent means when he says someone was personally targeted.

Update to extinguish the swarm of bots: was not domestic terrorism made legal by Trump afterbirth #KimJongRon #DeathSantis, but Florida is on edge because of that law and other divisive DuhSantis disasters. May the life lost Rest In Peace and may Floridians feel safe despite Ron

The mayor did not apologize for spreading toxic disinformation:

And of course that moron Richard Taite’s Twitter account where he advocated murder and racism has been permanently banned, right? What… NO? What, is there TWO kinds of justice here? Imagine if the thugs pulling the people out of the car had been white! Heads exploding… As it is, the media is silent and uninterested, as is Mayor Beetlejuice.

Remember when the left wing media needed a notarized confession from a terrorist committing a shooting while shouting “Allah Akbar!” was a radical Muslim and would not proclaim the attack terrorism? Perhaps they merely wanted to use them for political gain.

this is a terrorist attack. if you have doubts, look up Bruce Hoffman’s definition of terrorism. this is a case of premeditated murder. so richard, these guys are BLACK not white. with respect to the demorat pac-got his head shoved so deep he will never see the sun again..one can only imagine if the demorat pad director was the victim?? the fake media and social media would have a field day.
Recall that over 59% of people in America get their news off the social media platforms.
If this street trash is caught, thank to the black commuity and the HIV, lesbian slug mayor with a white wife will do nothing.

The lie that a white supremacist attacked LGBTs in a Pride parade in FLA will tumble out of Joe’s mouth as long as he’s allowed to give public remarks.

Same with this.
Just as the Dem PAC head said, it looked like a Confederate Flag and therefore the murder was “justified.”
Wait for Joe to add this to his hate mongering list of lies.

We will see if the FBI loses countless hours of sleep trying to find, and arrest, those that murdered two Puerto Ricans in front of their own children. How many false couples will be harassed by the FBI in early morning hours seeking justice in this case? After all, it was “white” supremacists that wantonly shoot that couple wasn’t it? Isn’t that our biggest threat to safety?

Of course, very Democrat Sheldon Whitehouse is doing the moon walk trying to explain why he still belongs to an all white beach club after being questioned about it in 2017 and the Black Congressional Caucus is denying membership to a Black Congressman because he wandered off the DNC plantation.

I’m still waiting on the illustrious Merrick Garland to give us examples of the rampant white supremacy that he claims is such a threat to American security.

0
Deplorable Me
Reply to  retire05

Was it “white supremacists”? We can’t racially profile the suspects, even though the video shows everyone around the car was black. I think we need to thoroughly examine the possibility (probability?) that it was violent white supremacists, of the same type that carried out that armed insurrection at the Capital January 6th (a date that will live in infamous exploitation) before we go after any other suspects.

This could be the result of cancel culture that demands a violation of a leftist “right” be denounced immediately. Failure to do so clearly indicates full-fledged support for the violation.

This cowardly idiot Trantalis knew if he didn’t denounce the accident as a terrorist attack and politically exploit it to attack conservatives. Of course, there’s no down side to being wrong (as long as they are a Democrat) because the corrupt liberal media will protect them.

The truth or lies don’t matter to Democrats; all they care about is promoting the leftist anti-American agenda. It just seems lies work best for them.