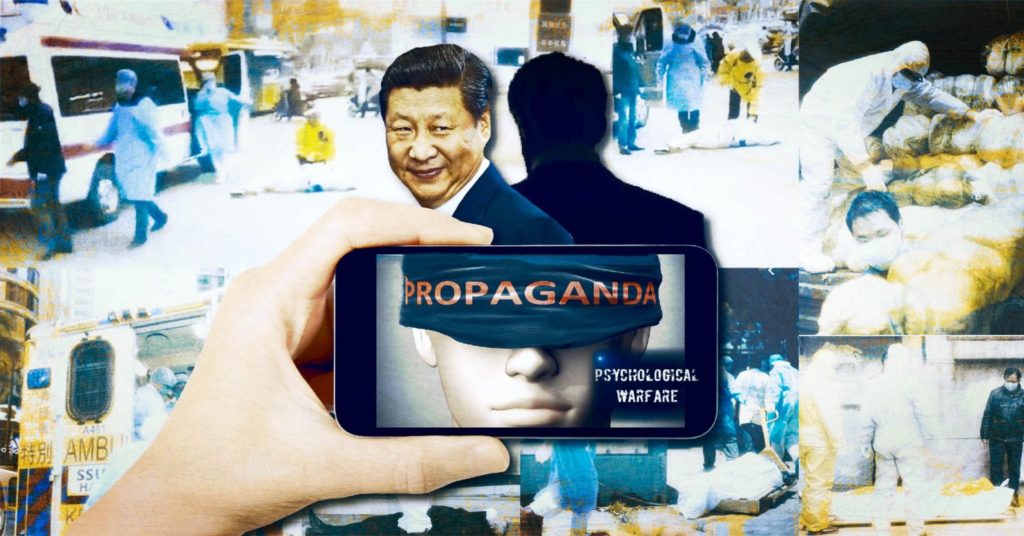 If you were online during January 2020 you likely saw the barrage of video clips that were supposedly coming out of China depicting ghastly “Coronavirus” scenes.

Most of those videos have been quietly wiped off the internet, but back in January and February those grisly videos were a viral sensation and they scared the shit out of Americans.

The videos captured supposed Coronavirus victims in various stages of pandemic horror. Some showed people foaming at the mouth and collapsing in the streets, while others featured ominous government officials wearing Hazmat suits, hovering over lifeless bodies struck down from the virus.

It was a virtual buffet of fear-porn, and Americans couldn’t get enough of it.

Personally, I saw hundreds of those videos. The comments from people sharing the clips would range from sarcastic “Just the flu” type stuff – intended to mock and shame anyone who tried to downplay the seriousness of the virus – to wild conspiracy theories claiming Coronavirus caused brain swelling, spontaneous convulsions, and instant death.

It was some of the most powerful video propaganda I’ve ever witnessed.

Imagine being a soccer mom and logging onto Facebook and seeing your sister-in-law’s post of a Chinese man foaming at the mouth and dropping dead, with the caption “Just the flu 🙄” You keep scrolling down your timeline and see the same clip over and over, and other similar shock videos shared by neighbors, friends, and people you work with.

You’d lose your mind, and rightfully so. That’s powerful messaging and it had a major impact on the American psyche, day in and day out for two months straight.

For me, being a suspicious person by nature, it all felt very hysterical, staged, and phony. But at a time when fear, confusion, and distrust were at an all-time high, it was virtually impossible to talk rationally about the virus with friends and family who were sucked in by the “terror propaganda.”

It’s understandable because even though I didn’t buy into the hype, there was still a nagging voice in the back of my head whispering “what if…”

And even that quiet little “what if” was tremendously powerful.

In just two short months Americans were whipped into a fear-frothing frenzy which set the table for the tyrannical lockdowns and mask mandates that would follow. Lockdowns that consumed our nation, pitted neighbor against neighbor, struck down our booming economy, and wiped out small businesses from coast to coast.

Two years ago, if you would have told Americans they would voluntarily shut down their businesses and lock themselves in their homes they would’ve laughed in your face. But those viral videos laid the groundwork for lockdown acceptance. They were the first of many perfectly-timed events that Americans would use to justify tossing away their rights and livelihood in exchange for harsh restrictions and lockdowns – after all, nobody wanted to foam at the mouth and keel over while shopping for cappuccino makers at Bed Bath & Beyond.

However, there was one very big problem…little did we know back then that all of those spine-tingling videos that laid the groundwork for the lockdowns were fake.

That’s right, the beginning of the Coronavirus mass hysteria and the very first building blocks that led to a nation-wide lockdown, the destruction of our economy, and the great global reset was a complete and total hoax.

You’d think a bombshell like that would concern everyone or at the very least pique the interest of journalists and politicians, right?

Many people shrugged off the videos, claiming there’s always fake or sensational news online. And they’re right. But this was different. Very different. Those “China fear videos” were hand-picked, edited, and manipulated in order to market a very specific horror story to Americans.

Those video clips played night and day into the darkest and most personal fears of every single American who watched them.

And there was a running narrative, as well. It went like this:

A deadly virus is coming to get you, and your government will downplay it and tell you it’s “just the flu,” but it’s not. It will kill you and your family.

Thanks to those videos, millions of Americans didn’t trust President Trump right out of the gate. While he was working to calm the nation, frantic Americans were thinking about all those Chinese people keeling over in the streets. “Why isn’t Tump as frantic and scared as we are?” many people wondered…what was he hiding?

It all came back to those videos. They set a powerful narrative and programmed countless American minds.

But who would do this? That’s the million-dollar question.

Internet trolls are brilliant and have pulled off some mindboggling stunts, but this felt very different from that. This felt highly organized, sophisticated, and had consistent expert messaging peppered with very cunning psychological warfare.

It looked and felt like a professionally coordinated marketing campaign.

Thanks to those videos, millions of Americans didn’t trust President Trump right out of the gate.

That and the Demediacrats with their constant false drone that Trump was doing NOTHING though he began organizing efforts to meet the unknown virus long before Democrats took any notice at all.

Thankfully, I don’t recall any “fear videos” other than the one CBS faked.

Like most other things the left exploits for political advantage, if it is so bad… why lie? Imagine how busy the left wing fact checkers were! Say, WHAAAAAAAAAA? Not a ONE was “fact checked”? It was very useful in undercutting Trump.