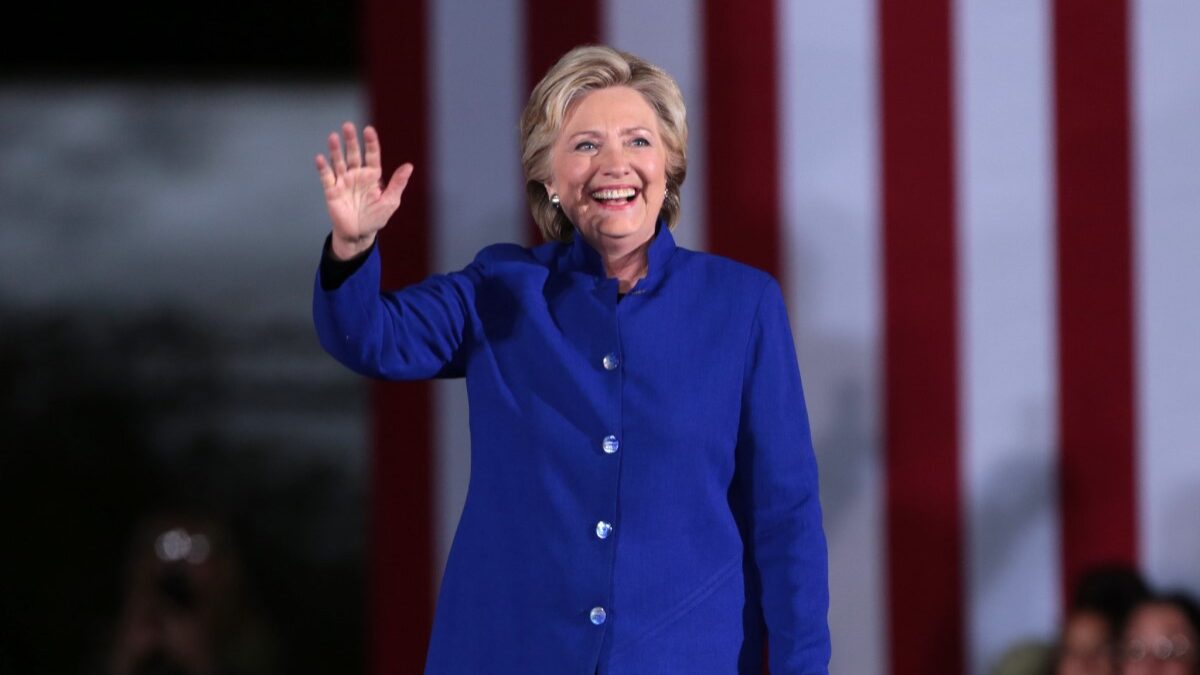 Hillary Clinton needs to sit down, shut up, and stay out of the public sphere forever.

The Russia collusion hoax she paid for and promoted is the reason Donald Trump and some of his voters believed (and maybe still do) that enemies of the former president hacked Dominion voting machines, flooded battleground states with counterfeit ballots, and engaged in other Machiavellian machinations to steal the 2020 election. Yet Clinton plays the puritan, blaming Trump’s refusal to accept Joe Biden’s victory as the cause of the violence that erupted at the capitol on January 6, 2021—all while she continues to insinuate some six years later that the presidency was stolen from her.

For the past two weeks, Clinton has promoted the false narrative pushed by the Jan. 6 Committee that there was “a criminal conspiracy to overturn the will of America’s voters,” and that it “culminated in the attempted coup of January 6.” Clinton, like the committee, sought to place Trump at the head of the “criminal conspiracy,” claiming that “the latest January 6 hearings show that Trump knew he lost the election. His own people told him he’d lost the election.” Clinton then accused Trump of “chos[ing] to wage a criminal conspiracy to overturn the results and prevent the peaceful transfer of power for the first time in American history.”

Like the members of the Jan. 6 Committee and their sycophant media, Clinton seeks to convince the American public that the only challenges Trump made to the 2020 election were ones based on crazy conspiracy theories, such as that Dominion voting machines in battleground states flipped his votes to Biden or that counterfeit ballots secreted in hidden suitcases cost Trump the election. The former first lady sought to connect Trump’s pushing of those theories of widespread fraud with the violence at the capitol on Jan. 6, taking to Twitter on Friday to brand “Donald Trump, his allies, and supporters” “a clear and present danger to American democracy,” in a tweet that echoed testimony from the show trial.

How Dare You See What I Did

It is bad enough for the House to attempt to blame Trump for the crimes committed on January 6 at the capitol by holding a show trial that focuses on the president’s unsupported claims of widespread election fraud, while completely ignoring “the verifiable evidence of systemic violations of election law, illegal voting, and the constitutionally deficient execution of the November 2020 election” that Trump also highlighted.

But for Clinton to add her voice to the partisan witch hunt demands derision because she is the reason Trump and some of his voters found even the most bizarre theories of voter fraud plausible and why they also do not trust the denials of members of the government.

Clinton was the principal behind the Russia collusion hoax. None of the election fraud theories bandied about following the November 2020 election were any more fantastic than what evidence now establishes the Democrat candidate and her cronies inside the government, and out, did in their failed attempt to steal the 2016 election from Trump.

How utterly crazy was it that an Australian diplomat would seek out a low-level Trump campaign volunteer, chat him up over drinks in a London bar, and then months later tell his American counterparts that a 30-something unknown named George Papadopoulos had said the Russians had dirt on Hillary Clinton? And how even more insane was it that the FBI would use that fact to launch an investigation into the campaign of the Republican candidate for president mere months before the election?

Or how nuts is it the FBI would seek not one, but four surveillance orders from the Foreign Intelligence Surveillance Court to spy on another Trump campaign volunteer—one who served as a CIA source himself? Then there was the DOJ lawyer altering an email to hide Carter Page’s previous collaboration with the CIA.

And don’t forget about how the DOJ obtained that warrant: By using a supposed confidential human source hired by the Clinton campaign who had no first-hand knowledge of the supposed evidence, but instead passed off to the FBI invented “intel” from a Russian national. Remember also the totally unbelievable scenarios included in the Steele dossier, such as the realistic recounting of the germ-phobic Trump paying for golden showers.

Yet, nutty as it was, our DOJ, without verifying any of the evidence that would establish probable cause, obtained the court order and then began spying on not just Page but the Trump campaign and later transition team and administration. They also tasked Stefan Halper, who amazingly knew three of the four individuals targeted by the FBI in the umbrella Crossfire Hurricane investigation, to wear a wire and question Papadopoulos, Page, and the co-chair of the Trump campaign, Sam Clovis.

Then there was the FBI using a defensive briefing for the Trump campaign to spy on Trump advisor Michael Flynn—a retired general who still held security clearances.

Let’s not forget either the completely implausible scenario that Christopher Steele, after lying to the FBI and feeding details of the investigation to the media and being terminated as a confidential human source, nonetheless continued to aid the investigation into Trump by feeding his “intel” to his pal in the DOJ, Bruce Ohr, who just happened to be married to Nellie Ohr, who was also conducting opposition research paid for by the Clinton campaign.

We haven’t even yet touched on the Alfa Bank wing of the Russia collusion castle. That entailed a high-level tech executive tasking top university researchers and business colleagues to search for dirt on Trump, including by searching proprietary information and sensitive government data. Then, when the search came up dry, the tech executive drafted a report seeking to hide the flaws in the data and then arranged for his lawyer, a former federal prosecutor and cybersecurity expert, to pass on the bogus intel to the general counsel of the FBI.

This short summary doesn’t even scratch the surface of the plot hatched, paid for, and executed, by the Clinton campaign—with her direct knowledge and approval to sell the Alfa Bank hoax to the media, and intuitively the rest of the Russia collusion hoax.

The Plot to Take Down a President

The plot also didn’t end with Trump’s inauguration. On the contrary, his enemies plotted to force his first attorney general, Jeff Sessions, to recuse, allowing for the investigation to continue unchecked. Even before Sessions’ recusal, FBI Director James Comey and others withheld information from Sessions.

Then, after Sessions’ recusal, the same folks conspired to force Flynn’s resignation by leaking a telephone call to the press to create a faux controversy about Flynn’s conversation with the Russian ambassador. Comey continued his plotting, taking notes of conversations with the president. Then after Trump fired him, Comey had a lawyer friend leak these memoranda to the press to force the appointment of a special counsel.

Following the failure of Special Counsel Robert Mueller to divine a crime, the deep state hatched another plot to remove Trump from office via a concocted “whistleblower” complaint alleging Trump threatened to withhold funding from Ukraine unless the government investigated Burisma and any potential scandal involving Hunter Biden. That plan succeeded, somewhat, with Trump being impeached, but not removed from office.

Given what the Clinton campaign did to Trump during the 2016 campaign, with assistance throughout from high-level FBI and DOJ agents, and given what Clinton’s deep-state cronies did in an effort to remove Trump from office, Trump wasn’t crazy to believe the farfetched stories of a 2020 election steal: He would have been nuts not to.

Yet Clinton claims Trump is the one who “wage[d] a criminal conspiracy to overturn the results and prevent the peaceful transfer of power for the first time in American history.” The projection lives loudly within her.

We Can Claim What You Can’t

Even more appalling is that Clinton says these words while she continues to argue that the 2016 election was stolen from her, as evident from the Friday Financial Times’ article summarizing Edward Luce’s lunchtime chat with the former Democrat candidate. While the reader learned little from Luce’s 100-minute lunch with Clinton beyond the former secretary of state’s gastronomic preferences—cream-based soups, no; crab cakes, a resounding yes—what stood out clearly was that Clinton remains in denial about her 2016 loss.

“Literally within hours of the polls closing in 2016, we had so much evidence pouring in about voters being turned away in Milwaukee and not being able to vote in Detroit,” Clinton told Luce. The failed 2016 Democrat candidate added that “These states were run by Republicans so there was no way to find out the truth about any of them.”

In making her stolen-election pitch to Luce, Clinton also laid blame on Vladimir Putin: While speaking with the Financial Times’ editor about the Russian leader and the situation in Ukraine, her obsession with connecting Russia to her defeat became clear as she continually “referr[ed] back to Putin’s role in America’s 2016 election”—the outcome of which she called “a break in history” and “almost eschatological.”