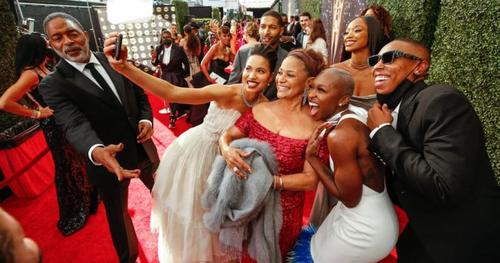 The LA County Department of Public Health responded to criticism of the maskless Emmys by claiming the rules didn’t apply because it was a television production event – despite the fact that workers were still made to wear masks.

There was uproar on Sunday as celebrities packed themselves into the Event Deck at LA Live without a mask amongst them as they kissed and hugged all night long.

Irate respondents on Twitter asked why celebrities were exempt from the rules yet their 4-year-old kids had to wear masks in class.

Under Los Angeles County’s Department of Health guidelines, everyone aged two years and older must wear a face covering in “all indoor public settings, venues, gatherings, and public and private businesses.”

However, after it was asserted that the rules don’t appear to apply to the rich and famous, the department was forced to respond.

New: LA County Department of Public Health tells me that the mask-less Emmys were not in violation of the county's mask mandate because "exceptions are made for film, television, and music productions” since “additional safety modifications” are made for such events. pic.twitter.com/6S105zYjbJ

“LA County Department of Public Health tells me that the mask-less Emmys were not in violation of the county’s mask mandate because “exceptions are made for film, television, and music productions” since “additional safety modifications” are made for such events,” tweeted CNN’s Oliver Darcy.

So apparently, so long as you’re making a television production, COVID-19 recognizes that fact and doesn’t show up for the night, much like it disappears as soon as people sit down to eat at a restaurant, but not while they walk to the table.

Health authorities went further, insisting that the event organizers “exceeded the baseline requirements for television and film productions,” before asserting that the full vaccination of all those present was “one of the most powerful ways to achieve a safe environment” (despite the fully vaccinated being able to pass on the virus).

“The Emmy Award Show is a television production and persons appearing on the show are considered performers,” they added.

So apparently, if you’re a “performer,” or in other words rich and famous, you don’t have to wear a mask.

But if you’re merely a lowly worker drone, you still have to wear a mask, as dozens of staffers were seen doing at the event.