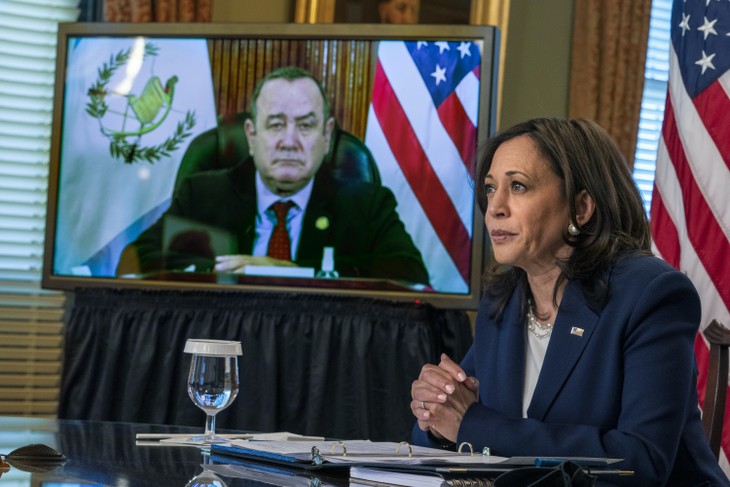 Kamala Harris flew to Guatemala yesterday to talk with their officials about the “root causes” of the border crisis in our country.

Harris showed how narcissistic she was by handing out cookies with her face on them to the reporters on the plane. Then, when she landed in Guatemala, she was met by protesters with big signs saying “Trump Won,” and “Go Home.”

Harris and Joe Biden have been trying to put the blame for the massive influx at the border, which resulted in a 21-year monthly high in border detentions in April, on issues in places like Guatemala. She’s trying to place blame everywhere else, except where the blame really lays, with their own words and policies.

Now she is in Guatemala saying that doing things like going to the border to actually see how bad it is in person would just be a “grand gesture.”

A reporter just asked VP Kamala Harris why she and President Biden have refused to visit the Southern border to see the crisis firsthand.

Her response—delivered from a podium in Guatemala—was that going to America's border would be nothing more than "grand gestures." pic.twitter.com/ExbUfi5dVv

Instead, she’s going to talk a lot about root causes, because that’s really going to address the crisis right now?

But it turns out no one is really having any of that spin away from the harmful effect of the Biden/Harris policies, including the Guatemalan president, Alejandro Giammattei. Giammattei tags the right people for it – calling Harris out on international TV.

Giammattei explained how the immediate policy changes upon Biden’s inauguration (such as the reversal of Trump’s “Safe Third Country” policy) immediately led to smugglers organizing in Guatemala bring kids illegally to the United States.

Joe Biden is responsible for this border crisis.

Even after the massive influx, the White House has made it clear they are not changing the policy of accepting all minors into the country and then reuniting them with family here or back in their home countries. So they’ll keep coming. Harris did some performative theater today, telling folks “don’t come.” But unless you actually change the policy, why would anyone care that you said that? So it’s just about posturing for the American audience, which is disturbed with Biden/Harris over their failures at the border.

The Guatemalan president’s comment isn’t even unique; the president of El Salvador said something similar in March.