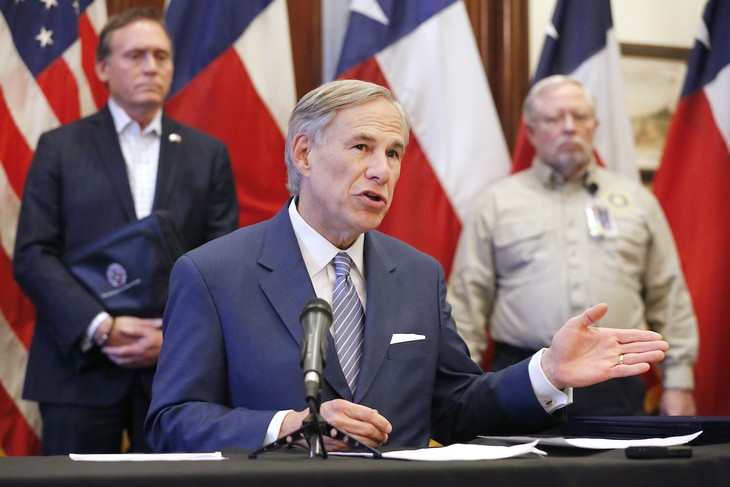 I love how some Republicans have finally grown a pair since Trump.

As I wrote this morning, Democrats threw a fit and stormed out of the legislative session before Republicans could pass Texas’ recent election security bill. The same party that wants to wipe out the filibuster at the national level is suddenly really interested in the rights of the minority party. Greg Abbott responded by saying he would call a special session.

Apparently, he wasn’t done dropping the hammer. In a move that Democrats and pundits alike probably weren’t expecting, Abbott is going to veto the portion of the state’s budget that pays legislators.

I will veto Article 10 of the budget passed by the legislature.

No pay for those who abandon their responsibilities.

That will certainly hit these Democrats where it hurts, and I suspect Republicans will be willing to play along until the bill is passed. If only such a move could be made at the federal level, but I digress. If Democrats are going to refuse to do their jobs and even allow a vote on a bill they don’t have the votes to technically stop via the legislative process, then they shouldn’t get paid. That sounds very fair to me.

The folding should be swift here. There’s nothing to be gained by continuing this fight, but Democrats need their face-saving moment where they really signal that they “did something.” This bill is going to get passed, and Texas’ elections will be better for it. There is nothing objectionable about standardizing things like mail-in voting and putting in place electioneering provisions that stop partisans from interfering.

Democrats want things to be a free-for-all while Republicans recognize that turning our elections into a complete joke is not good for the country.

Texit: Not a bad idea, along with about 35 states.

Election fraud is very important to Democrats. Look how much was needed to get this idiot Biden into office; imagine how much will be necessary after this unmitigated disaster of his failed term. They are even more desperate than they were in 2020. No pandemic can help them now.

The opposition to election security is election insecurity, which is what Democrats exploited in 2020. The LAST thing they wish to see is their means of fraud addressed and shut down. There is but one reason to oppose election security; FRAUD.

Damn! I love my governor! I plan to vote for him for as long as he keeps running. Way I figure it, the on!y he’ll leave office is either if he monumentally screws up or the Dems take Texas back. If the legislature keeps protecting the voting process that won’t be any time soon. Aside from the major cities – Houston, S. A., Dallas, Ft Worth and Austin – the rest of the state is a nice deep shade of red. Texas will stay red until the major cities grow to have a majority. In any case, this old White man is going to keep voting for Abbott for as long as I can!

Is Abbott under the impression that Texas state legislators depend on their pay to feed their families? Their official pay would put a family of four below the poverty level.

They want to rhetorically bash “socialist Democrat programs” at every turn to appeal to their populace base, while simultaneously taking credit for providing their base with the many essentials and benefits those same programs provide. This is the essence of republican political hypocrisy.

“Is Abbott under the impression that Texas state legislators depend on their pay to feed their families? Their official pay would put a family of four below the poverty level.”

Are you under the impression that citizen legislators should even be paid for what they do? If the pay in Texas is so bad, why do the greedy Democrats even run for office?

Then there is this:
“Some 4.2 million people are on Medicaid in Texas — including more than 3 million children.”

How many of those are illegals aliens who are not deserving of benefits provided to American citizens? But then, dumasses like Comrade Greggie thinks we should give free stuff to anyone who manages to pay a cayote $5-10,000.00 to bring them across the Rio Grande.

They point—which you typically ignored—is that Abbott isn’t “going nuclear” on anything but the gullibility of his supporters. In fact, the legislative body representing Texas voters just stopped his anti-democratic “election security” bill, which state republicans contrived as a means to diminish the power of a growing majority who tend to oppose them.

Remember when I asked you to cite what part of the Texas law was suppressing voters? You never responded. Is that because there is NOTHING in the law that suppresses anything but your election fraud?

Very clear, and very empirical, that Biden’s term is an absolute disaster:
1. Lost jobs
2. Paying people to stay unemployed
3. Printing money
4. More kids in cages after opening facilities that Trump shut down.
5. Government trafficking of kids to hid the BidenBorderCrisis
6. War resumes in the Middles East
7. Russians attacking our infrastructure.
8. China taking back power that Trump removed from them, and publicly humiliating the US on it’s own soil.