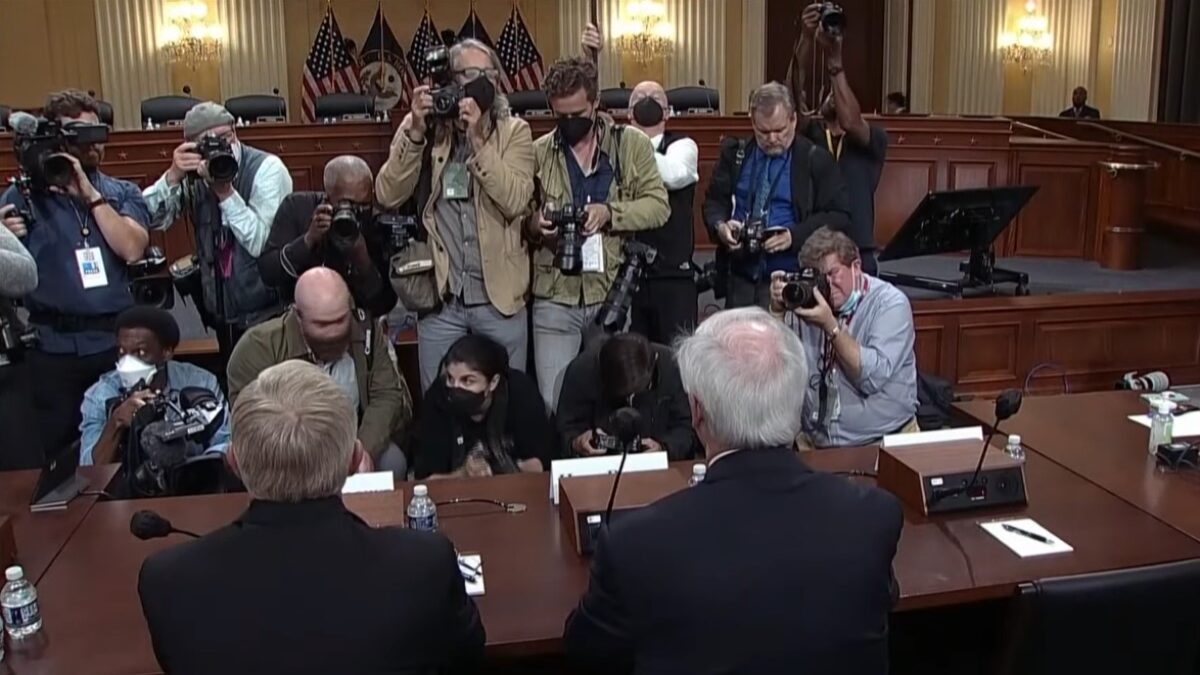 Over the weekend, former Department of Justice lawyer Ken Klukowski called on the Jan. 6 Committee to release the full transcript of his deposition testimony to correct the lies they told about him to the American public. Now The Federalist has exclusively obtained a statement from a former White House staffer confirming Klukowski’s claims.

That draft letter, dated December 28, 2020, stated the Department of Justice was investigating the 2020 election and recommended the Georgia legislature convene a special session to “evaluate the irregularities in the 2020 election including violations of Georgia election law,” and “determine whether those violations show which candidate for President won the most legal votes in the November 3 election.” The draft letter then suggested the General Assembly could appoint an alternative set of electors based on its findings.

The draft letter’s signature line included spaces for Clark, Acting Attorney General Jeffrey A. Rosen, and Acting Deputy Attorney General Richard Donoghue. But when Clark pitched the idea of sending the letter to Georgia officials, Rosen and Donoghue rejected the idea out of hand, because it was “not the department’s role to suggest or dictate to state legislatures how they should select their electors,” and “for the department to insert itself into the political process this way,” Donoghue told the committee, “may very well have spiraled us into a constitutional crisis.”

Donoghue was blunter with Clark in person, with Donoghue testifying he told Clark, “What you are doing is nothing less than the United States Justice Department meddling in the outcome of a presidential election.”

While last Thursday’s hearing by the Jan. 6 Committee centered on Clark and his efforts to have the letter sent to the Georgia legislature, the committee connected another DOJ attorney to Clark’s efforts, Klukowski—and did so by blatantly lying to the American public.

The Jan. 6 Committee Is Lying

Klukowski called out the Jan. 6 Committee’s fraud over the weekend in a public statement that began: “The January 6 Committee falsely accused me on Thursday of being a go-between in a conspiracy to overturn the 2020 election. That accusation is false both in its broad outlines and its details. Since the Committee first contacted me, I have cooperated without hesitation, provided it with hundreds of documents, and sat for many hours of recorded depositions. The information produced from those efforts fully contradicts the Committee’s statements regarding my actions, yet the Committee has chosen to keep such information to itself rather than share it with the public.”

The former DOJ lawyer then detailed in his public statement four false accusations levied against him by the Jan.6 Committee. First, Klukowski exposed Rep. Liz Cheney’s false portrayal of him as being sent by John Eastman to work under Clark. While Cheney fraudulently told the country that Klukowski “was specifically assigned to work under Jeff Clark,” Klukowski provided the committee documents establishing that his transfer to “the Civil Division of the DOJ was in the works since July 2020, long before Jeff Clark was the acting head of that Division.”

In an interview with The Federalist over the weekend, Klukowski stressed that during questioning by the Jan. 6 Committee—which exceeded more than 12 total hours—he made clear that he had been working on the transfer since mid-summer, hoping to move to the DOJ civil division to obtain more litigation experience, and that the transfer had been preliminarily approved in September 2020. Klukowski added that he also provided the committee detailed information that would allow them to confirm his testimony.

“I told the committee that I spoke with Camellia Delaplane, then a DOJ liaison to the White House who handled personnel placement, and provided the House Committee the date, September 10, 2020,” Klukowski told The Federalist. “I also suggested the committee review our email exchanges confirming my testimony, since they clearly had access to that information.”

Klukowski added that even before he met with Delaplane he sat down in July with the White House staffer responsible for coordinating senior DOJ appointments, Andrew Kloster. Klukowski told The Federalist that he shared with Kloster his desire to move to the DOJ civil division.

When reached by telephone yesterday, Kloster confirmed these details, adding even more texture to Klukowski’s recollection of the meeting.

“As a part of my oversight over the senior legal hires, I reached out to Ken, because I knew he had been one of our best at the Office of Management and Budget. Ken told me that he wanted to pivot to conservative public interest litigation, so rather than heading to be an agency deputy general counsel or general counsel in a Trump term two, I pushed to move him to DOJ’s Civil Division,” Kloster told The Federalist. Kloster added, “that meant a lot of back end process that took time, including speaking with Klukowski’s boss, with other White House officials, and with the Department of Justice.”

“Ken’s transfer had nothing to do with the election,” Kloster confirmed, telling The Federalist his discussions with Klukowski occurred months earlier.

Kloster then took aim at the House committee: “The January 6th investigation is all about attacking mid-level and senior staff like Ken, to ensure that we don’t have a farm team in 2024, no matter who the president is. This isn’t about truth, but about making it impossible for conservatives to successfully enter and leave government.”

Not only did Kloser confirm Klukowski’s account, as did the various documents accessible to the Jan. 6 Committee concerning the timing and purpose of the transfer, the public record confirms Klukowski sought litigation experience in the civil division. Specifically, in the brief 36 days that Klukowski served in the civil division—a fact Cheney presented as suspicious—Klukowski argued and won two federal appeals (completely unrelated to election issues) in the Ninth Circuit, including a complex and important case involving abstention.

Klukowski also denounced the committee for falsely suggesting he was working with Eastman to convince Vice President Mike Pence that Pence had the power to reject electors from various states based on “ongoing disputes” over the election. The committee spun that narrative by highlighting “an email recommending that Mr. Klukowski and Dr. Eastman brief Vice President Pence and his staff,” apparently on that theory.

However, as Klukowski detailed in his public statement, he “never briefed or advised Vice President Pence, or his staff, regarding any matter, including the 2020 election or the January 6 joint session of Congress,” and any “outside suggestion that [he] do so was not made with my involvement.” Klukowski went further, though, noting that “had anyone, including the Vice President, asked, I would have expressed my view that I disagreed with John Eastman’s theory on the powers of the Vice President at the January 6 joint session of Congress.”

During his weekend interview with The Federalist, Klukowski countered the Eastman theory, stating that “the opinion of Justices Rehnquist, Scalia, and Thomas in Bush v. Gore explains what the Constitution has to say about how electors are appointed in presidential elections. Consistent with that opinion, my view has always been that December 14, 2020, was the deadline for appointing all such electors.”

In the statement Klukowski issued in response to the committee’s Thursday hearing, he stressed that he had told the committee those views in his “sworn testimony,” and had provided the committee “documents reflecting my expression of such views.”

A Mountain of Lies

Klukowski also took issue with the committee’s portrayal of him as an author of the letter, when in fact his role as Clark’s “subordinate was to commit his dictations and outline to writing and fill in legal citations at the direction of my then-boss over the course of a single day.” Klukowski said he had no knowledge that any of the statements included in the letter were false, nor that Rosen and Donoghue did not intend to sign the letter.

Nor was there anything in the content of the letter that suggested it represented part of a plan to execute Eastman’s theory to reject the electors. Again, Klukowski stressed that he “provided all of this information to the committee during [his] depositions.”