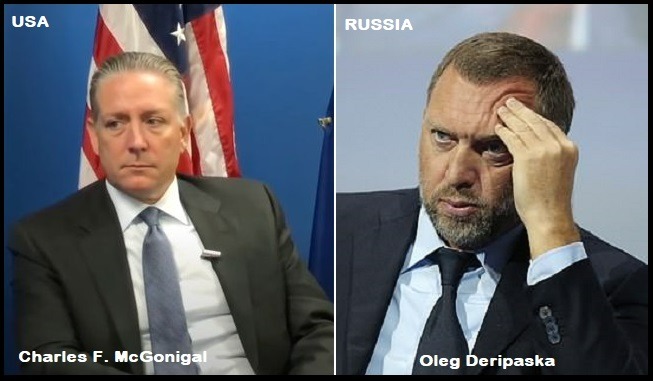 There is A LOT going on inside this story, and the pair of indictments only scratch the surface.

According to the DOJ,

“A former Special Agent in Charge of the FBI New York Counterintelligence Division [Charles F. McGonigal, 54, of New York City] and a former Soviet and Russian diplomat [Sergey Shestakov, 69, of Morris, Connecticut] were arrested Saturday on criminal charges related to their alleged violating and conspiring to violate the International Emergency Economic Powers Act (IEEPA) and conspiring to commit money laundering and money laundering.

Interestingly, there are two sets of indictments.  The first is in New York related to the U.S. sanctions against Russia, specifically Oleg Deripaska  [SEE HERE].  The second is in DC related to money laundering, payments from Deripaska [SEE HERE].  The New York case is related to post retirement activity in 2021.  The DC case is related to activity when Charles F McGonigal was taking money from Russians, and apparently others, while simultaneously investigating Donald Trump, “from August 2017 and continuing through and beyond his retirement from the FBI in September 2018.”

It would appear, Main Justice in DC is concerned about the timeline and are structuring the money laundering prosecution to keep tight control in Washington DC, for the period when McGonical was a special agent in charge.   However, given the backstory of the players involved, and known 2021 FARA filings that hit on the organizations involved, the FBI and DOJ have known about this issue for quite some time, at least 18 months prior to the indictments today.

These indictments are a rabbit hole that runs sideways from the Trump-Russia collusion nonsense and includes the use of “contractors” in 2021 that McGonigal had to know from his time in the FBI counterintelligence operations.

Charles McGonigal was the operational lead who kickstarted the Trump Crossfire Hurricane investigation in 2016 (a false construct) per testimony by Jonathan Moffa [pg, 32/33], and was also the lead official in charge of the investigation into the DNC email leak (WikiLeaks), claimed by the U.S. government to have stemmed from Russian hackers (another false construct).

Following his work in the DC bureau of the FBI, McGonigal was moved to be Special Agent in Charge (SAC) of the FBI’s Counterintelligence Division in New York.  He retired Sept ’18 from New York.

From the DOJ (New York Case):

As part of their negotiations with Deripaska’s agent, McGonigal, Shestakov and the agent attempted to conceal Deripaska’s involvement by, among other means, not directly naming Deripaska in electronic communications, using shell companies as counterparties in the contract that outlined the services to be performed, using a forged signature on that contract and using the same shell companies to send and receive payment from Deripaska.

McGonigal and Shestakov were aware that their actions violated U.S. sanctions because, among other reasons, while serving as SAC, McGonigal received then-classified information that Deripaska would be added to a list of oligarchs considered for sanctions as part of the process that led to the imposition of sanctions against Deripaska. In addition, in 2019, McGonigal and Shestakov worked on behalf of Deripaska in an unsuccessful effort to have the sanctions against Deripaska lifted. In November 2021, when FBI agents questioned Shestakov about the nature of his and McGonigal’s relationship with Deripaska’s agent, Shestakov made false statements in a recorded interview.” (link)

Within the indictment [pdf here, page #12] the methods McGonigal intended to use to assist Oleg Deripaska in the investigation of a competing oligarch: 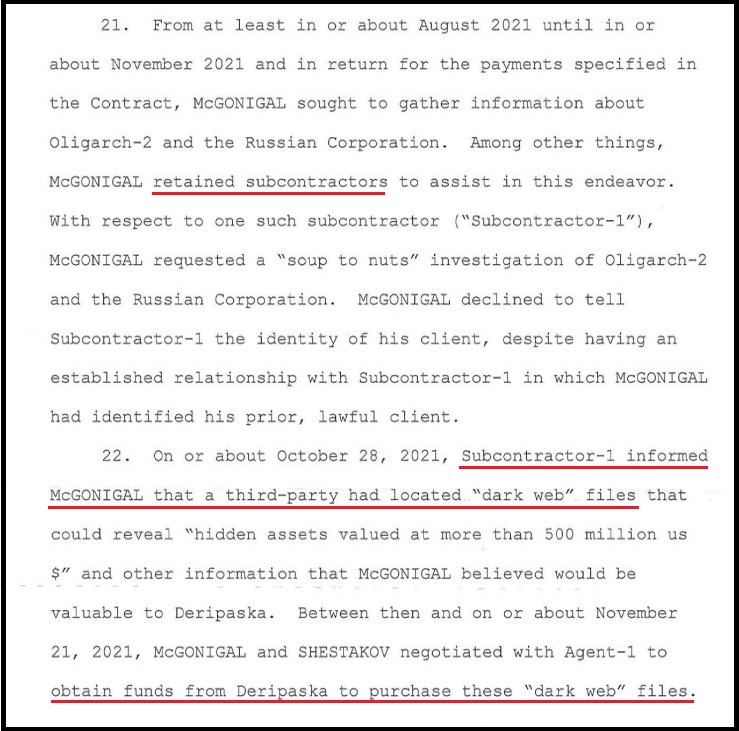 [Source pdf, page #12]
Now if you were a former FBI counterintelligence special agent and high-level officer within the organization, what subcontractor would you be reaching out to for support and research assistance on behalf of a client?  Occam’s Razor = the same subcontractors you used when you were in office.   Where would those subcontractors be able to look?… likely the same FBI/NSA databases we have been discussing for years.

Now, put your reference thinking cap back on, remember when we were saying back in 2017/’18/’19, that if FBI contractors had this kind of database access as described by the NSA and FISA court, wouldn’t it stand to reason there were also people inside these contracted agencies that would monetize their access to sell information.

Well look at what is outlined above under the auspices of “dark web” files and McGonigal “obtaining funds from Deripaska to purchase” them.

“Dark Web” files my ass, these are the files extracted by government contractor access to the FBI and NSA database.  It’s not a leap, heck, it isn’t even a nudge, to see the connection here.  I digress.

Back to the filings, let’s jump to the Money Laundering one in DC (SEE HERE).  The bold name is my suspicion on who the unnamed character is:

[…] Charles F. McGonigal, 54, a former FBI Special Agent in Charge of the New York Field Office, has been arrested on charges relating to his receipt of $225,000 in cash from an individual who had business interests in Europe and who had been an employee of a foreign intelligence service [Evgeny Fokin], while McGonigal was serving as Special Agent in Charge of FBI counterintelligence efforts in the New York Office. McGonigal retired from the FBI in September of 2018.

According to the nine-count indictment, unsealed today, from August 2017 and continuing through and beyond his retirement from the FBI in September 2018, McGonigal concealed from the FBI the nature of his relationship with a former foreign security officer and businessperson [Fokin] who had ongoing business interests in foreign countries and before foreign governments.

Specifically, McGonigal requested and received at least $225,000 in cash from [Fokin] and traveled abroad with the individual and met with foreign nationals.  The individual later served as an FBI source in a criminal investigation involving foreign political lobbying over which McGonigal had official supervisory responsibility.  McGonigal is accused of engaging in other conduct in his official capacity as an FBI Special Agent in Charge that he believed would benefit the businessperson financially. (more)

Likely due to his senior official status and close relationship with the DC FBI, the investigation of McGonigal was/is being handled by the Los Angeles office of the FBI.  According to the press release, “the FBI Los Angeles Field Office is investigating the case, with significant assistance provided by the FBI Washington Field Office.”

If you read the indictment pdf here and are curious about the New Jersey businesses and law firm involved, there is an excellent article from 2021 [SEE HERE] about a FARA notice that connects all of these dots together. “On Nov. 29, 2021, Sergey Shestakov, the former Soviet diplomat, registered as a Foreign Agent for Fokin, the alleged former senior Russian intelligence official.” (more)  That FARA filing is likely the construct of the issue that led to the indictments today.

Those persecuting Trump are walking on Thin Ice without anything to show is committed any crimes however Clinton(Both of them)Obama and Biden have turned Traitors but they prefer to ignore the whole thing. This is a Witch Hunt by the DNC/UN/Globalists and the CFR scoundrels

This is the smoking gun. As Matt Gaetz said, impeachment not necessary. Democrats will take out the trash for us.

Will greg still think of the scumbag pence as a patriot?

So, what now? Is it illegal for a former VP to have classified documents or not? Your move, Democrats!

For those who have been too dense to understand, THIS is why Hunter and Hunter’s laptop is important.

<blockquote class=”twitter-tweet”><p lang=”en” dir=”ltr”>The head of counterintelligence at the NY FBI office was getting paid hundreds of thousands of dollars illegally by the very Russians they were accusing Trump of colluding with.<br><br>Turns out the FBI was colluding with Russians more than President Trump or his campaign ever were! <a href=”https://t.co/e4kqHQTGio”>pic.twitter.com/e4kqHQTGio</a></p>&mdash; Rep. Matt Gaetz (@RepMattGaetz) <a href=”https://twitter.com/RepMattGaetz/status/1617721283092914179?ref_src=twsrc%5Etfw”>January 24, 2023</a></blockquote> <script async src=”https://platform.twitter.com/widgets.js” charset=”utf-8″></script>

The Albanian connection is interesting also a China gas company connection. Per the indictment.

I’ve always believed Russia preferred and aided Hillary to win the Presidency in 2016. The fact that the guy leading the charge in the FBI against Trump had extensive connections to Russia makes that point more clear. If they had Hillary, the Russians could control her completely with all the blackmail material they had on her and the ease with which she could be bought (like someone else named idiot Biden I could mention). It is significant that the Democrats had the same intent, to use fake, known false information to try and destroy Trump. Like minds, I suppose.

It is truly sad to see how far the FBI has sunk, thanks to Democrat penetration.