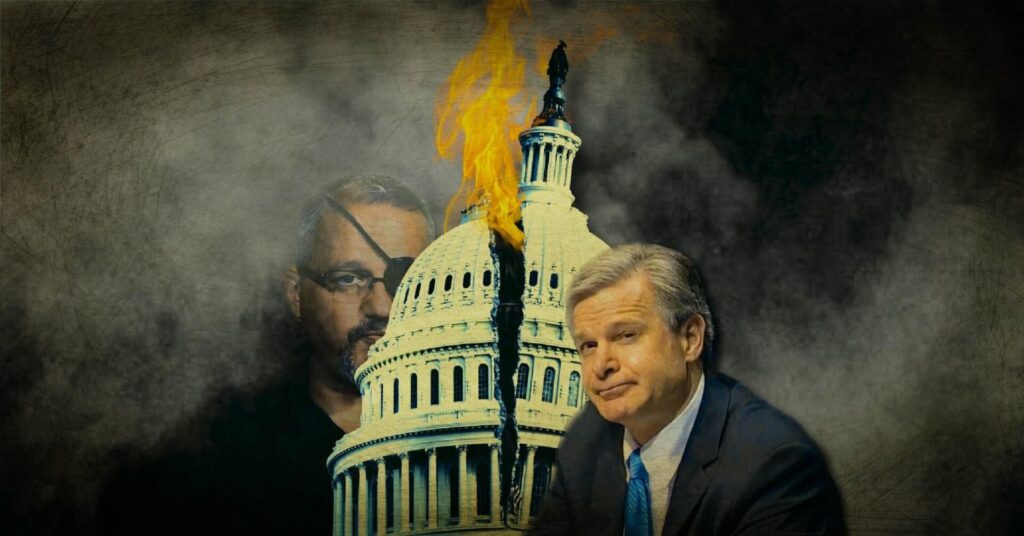 The Oath Keepers are the highest-profile and most extensively prosecuted militia group associated with the events of January 6. So far, the government has charged a total of 18 Oath Keepers with conspiring to obstruct Congress’s certification of the 2020 Presidential Election. This is a serious conspiracy charge that could potentially lead to decades of prison time.

Oddly enough, Oath Keepers founder and leader Stewart Rhodes himself has not been charged with anything, despite the fact that the government cites Rhodes’ own statements and actions as largely constitutive of the conspiracy for which so many of his underlings face charges. Revolver News has previously covered this extensively in a major piece of investigative journalism.

Apart from any charges of conspiracy, there is no doubt that, based on his actions on January 6, Stewart Rhodes could technically be prosecuted for trespassing on US Capitol grounds.

Just last Thursday, in fact, approximately 20 FBI vehicles swooped in on the home of Oath Keepers associate Jeremy Brown, searched his belongings for five and a half hours, and took all of his phones and electronics. The Feds justified their entire raid on Brown on a minor alleged “trespassing” offense. Stewart Rhodes is on record and on video committing the exact same trespassing offense—a fact that has also been stipulated in court.

All of this raises serious questions that the government and its press lackeys have yet to answer.

Why has the government avoided indicting Rhodes on an easy lay-up trespassing charge? Why are they protecting him from indictment on more serious conspiracy charges? And if, after 9 months of “investigation,” the Feds eventually hit Rhodes with a minor charge like trespassing, rather than the more serious conspiracy charge so many of his underlings face, what would that imply?

This report will answer these questions, and in so doing raise some profoundly disturbing questions related to federal involvement, at the very highest levels, in the events of January 6.

Before we proceed, however, we must very clearly state one thing: If Stewart Rhodes were to be charged with trespassing, it would be a very stupid and illegitimate charge, just like it would be for any other January 6 attendee who never went inside the Capitol. But if the Justice Department wants to, levying such a charge would be inescapable, based on the aggressive prosecutorial standard it has already established for January 6 cases.

Back to the case of Jeremy Brown. The Justice Department explained in its peculiar arrest affidavit for Brown, an Army Green Beret veteran and Oath Keeper associate, that anyone who set foot anywhere in a giant swath of land ranging from the Capitol’s West side lawn to its East side promenade is technically guilty of trespassing: Under ordinary circumstances, these “grounds” are open to the public, not “restricted.” But because law enforcement erected some police barriers and fencing there on January 6—barriers that were all but removed before most of the attendees even arrived at the Capitol—thousands of Trump supporters unknowingly crossed an imaginary Maginot Line.

Effectively, they walked into a booby trap.

When the FBI arrested Oath Keeper associate Jeremy Brown last week for trespassing, they said he was standing on the East side promenade, and therefore, he was technically “more than 100 feet within the restricted grounds.” That puts Jeremy Brown here, on the red X: Stewart Rhodes, the head of the Oath Keepers, was actually standing on the Capitol steps, even deeper into that restricted zone than Brown. Here’s a video of the same scene:

At the time the above video was taken, at least 14 of Rhodes’s lieutenants had just been inside the Capitol building. On the steps, the Oath Keepers came out to meet their leader, Rhodes, who had been waiting for them to file out one by one.

Rhodes’s presence on the Capitol steps is well known to the Justice Department, as it has been since January 6. But instead of charging Rhodes, like they just charged Jeremy Brown, the DOJ has instead weaponized Rhodes’ presence on the Capitol steps as corroborating evidence that the Oath Keepers were following a common conspiracy to obstruct the Senate vote—because they were following their common leader, Rhodes: