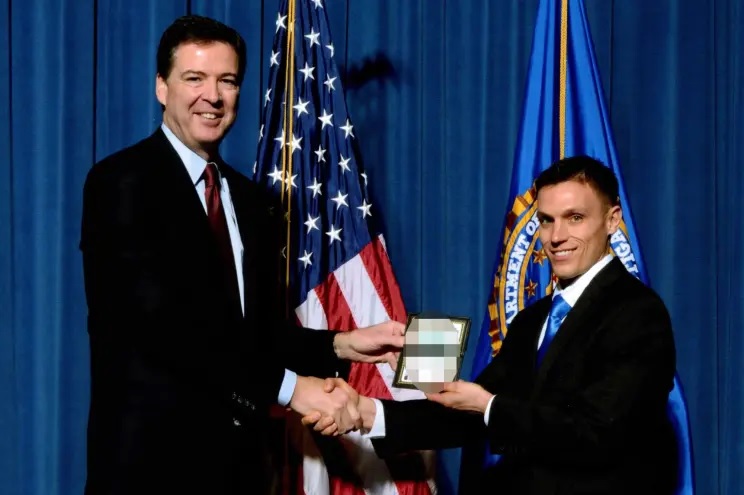 Friend, 37, a respected 12-year veteran of the FBI and a SWAT team member, was suspended Monday, stripped of his gun and badge, and escorted out of the FBI field office in Daytona Beach, Fla., after complaining to his supervisors about the violations.

He was declared absent without leave last month for refusing to participate in SWAT raids that he believed violated FBI policy and were a use of excessive force against Jan. 6 ­subjects accused of misdemeanor ­offenses.

This American hero, the father of two small children, has blown up his “dream career” because he could not live with his conscience if he continued to be part of what he sees as the unjust persecution of conservative Americans.

Friend, who did not vote for Donald Trump in the 2020 election, said he told his immediate boss twice that he believed the raid, and the investigative process leading up to it, violated FBI policy and the subject’s right under the Sixth Amendment to a fair trial and Eighth Amendment right against cruel and unusual punishment.

In his whistleblower complaint to DOJ Inspector General Michael Horowitz, obtained by The Post, Friend lays out multiple violations of FBI policy involving J6 investigations in which he was involved.

He says he was removed from active investigations into child sexual exploitation and human trafficking to work on J6 cases sent from DC. He was told “domestic terrorism was a higher priority” than child pornography. As a result, he believes his child exploitation investigations were harmed.

He also has reported his concerns about a politicized FBI to Republican members of Congress, among 20 whistleblowers from the bureau who have come forward with similar complaints.

Friend says he was punished after complaining to his bosses about being dragged into J6 investigations that were “violating citizens’ Sixth Amendment rights due to overzealous charging by the DOJ and biased jury pools in Washington, DC.”

His top-secret security clearance was suspended last week because he “entered FBI space [his office] and downloaded documents from FBI computer systems [an employee handbook and guidelines for employee disciplinary procedures] to an unauthorized removable flash drive.”

In a Sept. 16 letter from the head of FBI human resources, he was told he was losing his security clearance also because he “espoused beliefs which demonstrate questionable judgment [and demonstrated] an unwillingness to comply with rules and regulations.”

In his whistleblower complaint, Friend describes “reprisals” from his supervisors after he voiced his conscientious objections.

“Instead of hundreds of investigations stemming from an isolated incident at the Capitol on January 6, 2021, FBI and DOJ officials point to significant increases in domestic violent extremism and terrorism around the United States.

“At no point was I advised or counseled on where to take my disclosure beyond the reprising officials above; the threatened reprisal constituted a de facto gag on my whistleblowing.”

On Aug. 19, he first told his immediate boss, Supervisory Senior Resident Agent Greg Federico, that he believed “it was inappropriate to use an FBI SWAT team to arrest a subject for misdemeanor offenses and opined that the subject would likely face extended detainment and biased jury pools in Washington, DC.

“I suggested alternatives such as the issuance of a court summons or utilizing surveillance groups to determine an optimal, safe time for a local sheriff deputy to contact the subjects and advise them about the existence of the arrest warrant.”

Federico told him it would have been better to just “call in sick” rather than voice his objection and “threatened reprisal indirectly by asking how long I saw myself continuing to work for the FBI.”

Four days later, Friend was summoned to Jacksonville to meet his next-level bosses, Assistant Special Agents in Charge Coult Markovsky and Sean Ryan, about his refusal to join the SWAT raid.

He told them about his concerns over “irregular” case handling of J6 matters that he believed were in violation of a legal rule known as “Brady” that requires prosecutors to disclose evidence that would exonerate a defendant.

They asked if he believed any J6 rioters committed crimes and he replied: “Some of the people who entered the Capitol committed crimes, but others were innocent. I elaborated that I believed some innocent individuals had been unjustly prosecuted, convicted and sentenced.”

Markovsky then asked Friend if J6 rioters who “killed police officers” should be prosecuted, even though no such thing happened. When Friend pointed out that “there were no police officers killed on January 6, 2021,” Markovsky told him he was being a “bad teammate.”

Both agents “threatened reprisal again by warning that my refusal [to go on the SWAT raid] could amount to insubordination. References were made to my ­future career prospects with the FBI.”

Friend was labeled AWOL the day the raid took place and stripped of his pay.

A week later, he was told to meet the top agent in Jacksonville, Special Agent in Charge Sherri Onks, who told him he needed to do some “soul searching” and decide if he wanted to work for the FBI.

When he told her “many of my colleagues expressed similar concerns to me but had not vocalized their objections to FBI executive management,” she told him his “views represented an extremely small minority of the FBI workforce.”

She then shared the emotional experience of fearing for her own life on Jan. 6, 2021, when she was sitting on the seventh floor of the secure J. Edgar Hoover Building, FBI headquarters, after protesters one mile away “seized the Capitol and threatened the United States’ democracy.”

Friend says his concerns are shared by large numbers of rank-and-file FBI agents across the country who believe they are being used as pawns to pursue the political agenda of the bosses in Washington, DC.

These kinds of abuses of the law are a “morale killer” for field agents, he says.

The Department of Justice, FBI, and federal court system are caricatures of themselves. This is what our top law enforcement and investigative agencies are working on as the border is wide open and cities are under siege by violent criminals: pic.twitter.com/4L8sdxjLV7

Why not a photo of the Hardee’s drive thru!

In the Democrat controlled FBI, liars get promoted, honest patriots get fired. Yep, that’s a police state, alright. Viewing the law and justice in a different way than the fascists will get you fired. Later, it will get you “re-educated”.

The Gestapo/FBI/Stasi will need to be defunded and sacked. It can not be reformed

Internal inconsistency is often a tip off that you’re reading a poorly-written propaganda article:

Friend, 37, a respected 12-year veteran of the FBI and a SWAT team member, was suspended Monday, stripped of his gun and badge, and escorted out of the FBI field office in Daytona Beach, Fla., after complaining to his supervisors about the violations.

Respected? By who, and for what? It’s not like they escorted him out after presenting him with a medal and an official Certificate of Commendation.

He was declared absent without leave last month for refusing to participate in SWAT raids that he believed violated FBI policy and were a use of excessive force against Jan. 6 ­subjects accused of misdemeanor ­offenses.

He wasn’t suspended for “complaining to his supervisors about the violations.” He was suspended for refusing to do his job. You don’t get to pick and choose which orders to follow or which enforcement actions you participate in when you’re part of an FBI SWAT team.

At Just the News, Jim Jordan explains what Friend means about the “case file manipulation.”

No, it’s all just the same bullshit case. They’re assigning the cases to local offices so that they can put little “Domestic Violent Extremism” pins on a map of the US and show DANGEROUS RIGHT-WING PLOTS everywhere.

Rep. Jim Jordan (R-Ohio) said in a letter to FBI Director Christopher Wray that the “manipulative case-file practice” was being conducted by the bureau’s Washington field office, which was instructing local FBI offices to open up cases on their books that were in fact simply related to the Capitol breach.”The FBI’s case categorization creates the illusion that threats from DVE are present in jurisdictions across the nation, when in reality they all stem from the same related investigation concerning the actions at the Capitol on January 6,” Jordan wrote.

Dan Bongino’s interview with FBI agent Kyle Seraphin is up. In the below clip, he says two FBI agents have been suspended without pay — I assume for coming on the second year now — for merely attending the Trump January 6th rally.

They did nothing illegal.

What dark secrets do they hide from us?