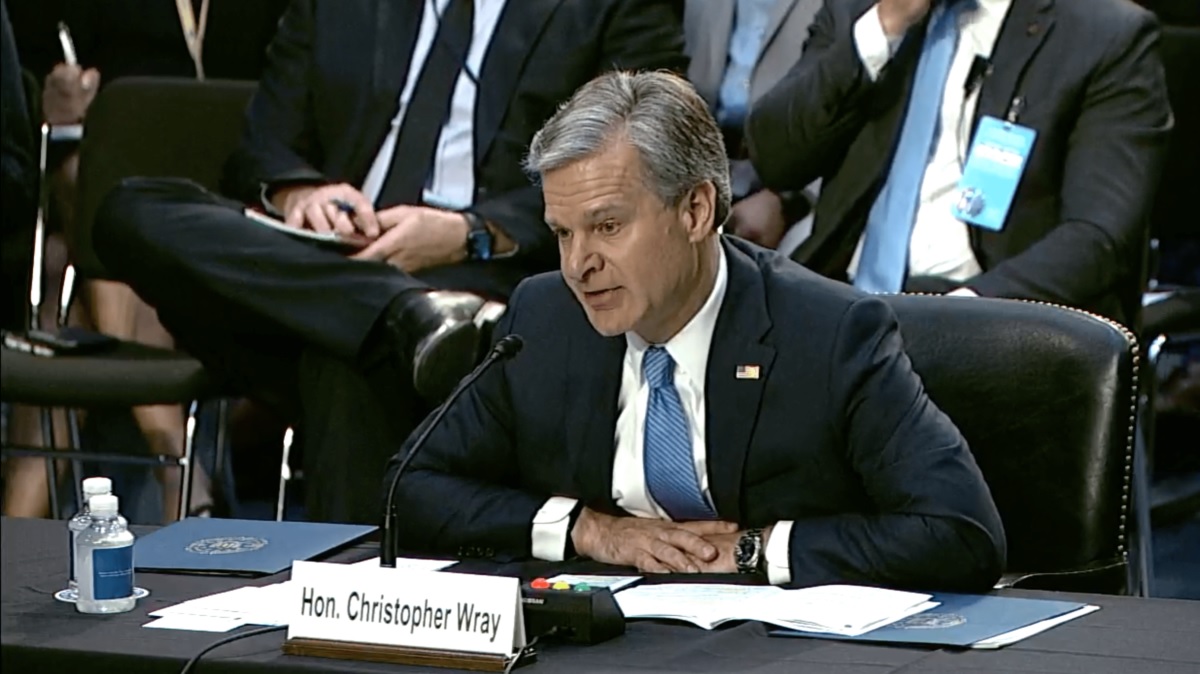 ‘Director Wray, you will have to explain to the committee – and to the country – how you’ll manage this mess and how you’ll clean house,’ Sen. Grassley said.

FBI Director Christopher Wray refused to answer legislators’ questions about his agency’s history of corruption and cover-ups and instead doubled down on defending the FBI’s actions against U.S. citizens during a Senate Judiciary hearing on Thursday.

Senators on both sides of the aisle explained their frustrations with the FBI’s lack of transparency and response to their various letters inquiring about threats around the country.

“There is the perception that there are two tiers of justice: one for people that are favored and one for ordinary Americans,” Sen. Marsha Blackburn noted during her interrogation.

Instead of addressing concerns about deceit, Wray confirmed Republicans’ suspicions that the FBI does engage in politicized investigations such as evaluating so-called threats against school board members at the urging of the Department of Justice following its infamous letter from the National School Boards Association.

Sen. Ted Cruz during FBI oversight hearing: “The National Association of School Boards asked the AG to investigate parents as domestic terrorists under the Patriot Act. … 5 days after that letter, the AG sent a memo to you directing the FBI to target parents…” pic.twitter.com/j5nUrYkeLO

Ranking member Chuck Grassley was just one of the many Republicans who grilled Wray about the FBI’s increasing partisanship and the effect that a weaponized federal agency has on Americans’ trust in its institutions.

“Director Wray, simply put, the FBI’s credibility is on the line, as are principles that helped found and sustain our great nation,” Grassley said in his opening statement.

Grassley sent a letter to Wray and Attorney General Merrick Garland last month outlining how both the Department of Justice and the nation’s primary domestic intelligence agency are “institutionally corrupted to their very core to the point in which the United States Congress and the American people will have no confidence in the equal application of the law.”

That was after multiple whistleblowers alleged that high-ranking bureau officials manipulated evidence related to an investigation into President Joe Biden’s son Hunter Biden and his “pay-to-play scandal of influence-peddling.” Evidence also suggests that “FBI Headquarters either improperly withheld information or presented inaccurate information to the U.S. attorney’s office in Pittsburgh and possibly also Delaware” about Hunter.

When Grassley asked Wray on Thursday why concerns that “the FBI has become too politicized in its decision making” were allegedly “removed from this year’s final report” and what Wray plans to do to address those concerns, the director dodged the question.

“I think you’ve answered the process. But you haven’t answered this specific thing about why that information was taken out of the report,” Grassley noted after Wray went on a tangent about visiting various field offices.

“Yeah, I don’t, I’m not familiar with that. … Let me see if there’s something we can share with you on that,” Wray said.

Deflection and dodging quickly became the name of Wray’s game. Wray wouldn’t answer Republican Sen. Josh Hawley’s questions about why the FBI is demanding the personal information of concealed carry permit owners despite state laws prohibiting local law enforcement from turning that over. Nor would he answer Hawley’s questions about why the federal government reportedly did not vet hundreds of Afghan evacuees who were on various terrorist watch lists.

One of Wray’s talking points during the hearing was the spike in violent crime across the county. When Republican Sen. John Cornyn of Texas asked him how that violence is related to the crime rings operating thanks to the compromised U.S.-Mexico border, Wray danced around the issue.

“Director Wray, I’ve always thought of you as a straight shooter but you won’t answer that question?” Cornyn asked.

It was then that Wray conceded that the “border presents significant security issues” that feed the violence he claims his agency is struggling to combat.

“There’s a wide array of criminal threats that we encounter down at the border. You mentioned a little bit in some of your questions, the transnational criminal organizations that use diverse and complex methods to traffick drugs, that then cascades over into prison and street gangs who distribute it,” Wray admitted.

Sen. @JohnCornyn: "Is the border secure?"

FBI Director Chris Wray: "Boy, I am hesitant to substitute my judgement for the Secretary of Homeland Security."

Cornyn: "I've always thought of you as a straight shooter, but you wont answer that question?" https://t.co/BNyW5nV5Ad pic.twitter.com/nFe2kWQCDv

When Sen. Mike Lee asked what actions the FBI took against pro-abortion activists’ violent attacks against churches, pro-life organizations, and pregnancy centers following the U.S. Supreme Court’s Dobbs v. Jackson decision, Wray promised to “go after that conduct aggressively” but could not provide an exact number of times the FBI intervened.

Instead, he rattled off a few investigations that he knew about in states such as Iowa and Tennessee.

Sen. Mike Lee: "How many domestic terrorism investigations does the FBI currently have open under the category of abortion-related violence?"

Director Wray: "We have opened a number of domestic violent extremism investigations…" pic.twitter.com/kZ3KrXrUdo

As Sen. Tom Cotton pointed out, Wray also seemed to have no issue with how his agency failed to address widespread protests and harassment against Supreme Court justices following the Dobbs leak or the final decision.

To Wray’s credit, he did state that the United States’ most significant foe “would be the People’s Republic of China and specifically the Chinese Communist Party.”

But, as Republican Sen. Ben Sasse explained, the FBI’s official priorities include the vague “domestic terrorism” umbrella but not explicit investigations into the CCP’s actions within the U.S.

Sen. Sasse: "Who is the most significant geopolitical foe the United States faces in the next decade?"

Director Wray: "That would be the People's Republic of China, and specifically the Chinese Communist Party." pic.twitter.com/Slok9hH6Z7

Sen. Ted Cruz took his criticism of the FBI’s focus on “extremism” and so-called extremist symbols one step further by placing his boot, which is emblazoned with the “come and take it” flag, on the table in front of him.

“What are y’all doing? This makes no sense. Do you agree with this FBI guidance that the Betsy Ross flag and the Gadsden flag and the Gonzales battle flag are signs of militia violent extremism?” Cruz asked.

"What are y'all doing? Do you agree w/ this FBI guidance that the Betsy Ross flag and the Gadsden flag and the Gonzales battle flag are signs of militia violent extremism?" pic.twitter.com/g6UZiiJbft

When Wray did get around to answering questions, his answers did not appear to give senators confidence that his agency is doing its job well.

Wray not only hinted that the agents involved in the Michigan Gov. Gretchen Whitmer kidnapping suspected entrapment scheme were not punished but also confirmed that the supervisory agent over the Detroit field office where the operation was based was later promoted to the Washington D.C. bureau.