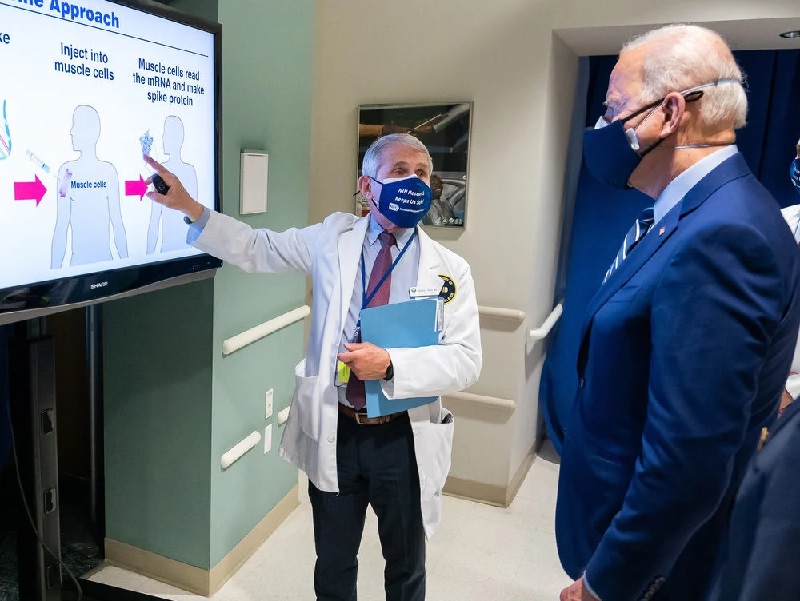 Dr. Anthony Fauci falsely claimed he’s “always” been open to the probability that COVID-19 began to spread as a result of a leak from the Wuhan Institute of Virology.

“People forget that, but if you go back then, even though you lean towards feeling that this is more likely a natural occurrence, we always felt that you’ve got to keep an open mind. All of us,” Fauci said on “CBS This Morning” on Wednesday. “We didn’t get up and start announcing it, but what we said, ‘keep an open mind and continue to look.’”

Dr. Fauci on COVID lab leak theory: “We’ve always said ‘keep an open mind and continue to look.’ So I think it’s a bit of a distortion to say that we deliberately suppressed that.” pic.twitter.com/20VuUBHt2Y

Despite Fauci’s claims, the National Institute of Allergy and Infectious Diseases director joined the corporate media and Democrats in downplaying and even “debunking” claims that COVID-19 may have escaped from the lab in Wuhan that received U.S. funding and previously performed gain-of-function research.

In May of 2020, Fauci reportedly shot down the lab-leak theory to National Geographic, telling the magazine the theory was a “circular argument.”

“If you look at the evolution of the virus in bats and what’s out there now, [the scientific evidence] is very, very strongly leaning toward this could not have been artificially or deliberately manipulated. … Everything about the stepwise evolution over time strongly indicates that [this virus] evolved in nature and then jumped species,” Fauci said at the time.

“Based on the scientific evidence, he also doesn’t entertain an alternate theory — that someone found the coronavirus in the wild, brought it to a lab, and then it accidentally escaped,” National Geographic reported.

In recently released emails between Fauci and other health officials, EcoHealth Alliance head Dr. Peter Daszak, who had ties to the Wuhan lab, thanked the COVID adviser for minimizing the lab leak theory in exchange for pushing a “natural origin” story.

“I just wanted to say a personal thank you on behalf of our staff and collaborators, for publicly standing up and stating that the scientific evidence supports a natural origin for COVID-19 from a bat-to-human spillover, not a lab release from the Wuhan Institute of Virology,” Daszak wrote to Fauci in April 2020.

In his reply, Fauci thanked Daszak for the “kind note” which came just hours after Fauci rejected what Business Insider labeled “a conspiracy theory that the novel coronavirus was created in a Chinese lab.”

In one email dated April 17, 2020, Fauci appears to respond to a message from National Institutes of Health (NIH) Director Francis Collins under the subject line, “conspiracy gains momentum.” The whole exchange is redacted except for a Mediaite link to a story on Fox News’ Bret Baier’s reporting that U.S. intelligence sources were increasingly confident that the novel coronavirus came from a Chinese lab.

“There was a study recently that we can make available to you, where a group of highly qualified evolutionary virologists looked at the sequences there and the sequences in bats as they evolve. And the mutations that it took to get to the point where it is now is totally consistent with a jump of a species from an animal to a human,” Fauci said in an April 18, 2020, White House press briefing, despite having knowledge from other scientists that the virus had “unusual features” that “potentially look engineered.”

During his interview on Wednesday, Fauci also claimed that “it’s a bit of a distortion to say that we deliberately suppressed” theories that the virus was created or escaped from the virology institute.

We might not know what’s been in the brain of Fauci, but we DO know what words have come out thru his mouth.
He directly caused the “cancelling” of thousands of posters to social media who espoused that.
~~~~~~~~~~~~~~~~

Meanwhile WHY does the jab especially lay down spike proteins inside women’s and gorl’s ovaries?
82% of the jab’s spike proteins end up in ovaries while men’s sex organs are hit with spike proteins at the same rate as all other cells.

A tech titan who researched this got this graphic thru a freedom of information demand.
His regrets about vaxxing himself and his own 3 daughters is found here:

Should you get vaccinated?

What he’s saying is that they’ve always known the virus came from a lab and discussed, privately, how to keep it quiet. That was their “open mind”.

Whenever I see or read about Fauci I am reminded of an old saying, “Butter would not melt in his mouth.”