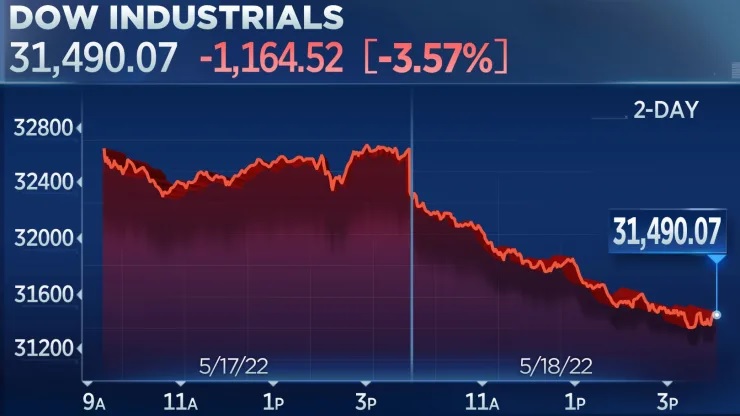 Just kidding about that last part.

Tryna get hired by the Disinformation Governance Board. I heard their top spot just opened.

The Dow Jones Industrial Average posted its biggest loss since 2020 on Wednesday after another major retailer warned of rising cost pressures, confirming investors’ worst fears over rising inflation and rekindling the brutal 2022 sell-off.

I can’t find what prompted the June 2020 sell-off but I imagine it had something to do with the GLOBAL PANDEMIC AND THE WORLD ECONOMY LOCKING DOWN.

And we’re matching that fall.

Markets returned to heavy selling after two back-to-back quarterly reports from Target and Walmart stoked investor fears of rising inflation taking a bite out of corporate profits and consumer demand. It’s the fifth Dow decline of more than 800 points this year, which all occurred as the stock sell-off intensified within the last one month.

“The consumer is challenged,” said Megan Horneman, chief investment officer at Verdence Capital Advisors. “We started to see at the end of the year that consumers were turning to credit cards to pay for the rise in food prices, rise in energy prices, and that’s actually gotten much worse. … This is going to hurt those bellwether retail places and Walmart tends to be one of them.”

“So I think investors are scratching our heads going, ‘so, who’s next?’ And they’re giving visibility into what’s happening with the consumer.”…”Any company that relies on households and discretionary purchases will likely suffer this quarter because a lot of discretionary income has been funneled to food and energy prices,” said Jack Ablin, founding partner of Cresset Capital.

In an appearance Wednesday on CNBC’s “The Exchange,” Jeremy Grantham said the current downturn is worse than the tech bubble of 2000.

Over at Hot Air, John Sexton notes that Fed Chair Powell says he’ll raise rates as he must to stop inflation, but former Fed chair Ben Bernacke says that Powell waited to long to start raising rates, and that it’s probably too late and that we might be looking down the barrel of the extreme measures that Paul Volcker had to take in 82-83.