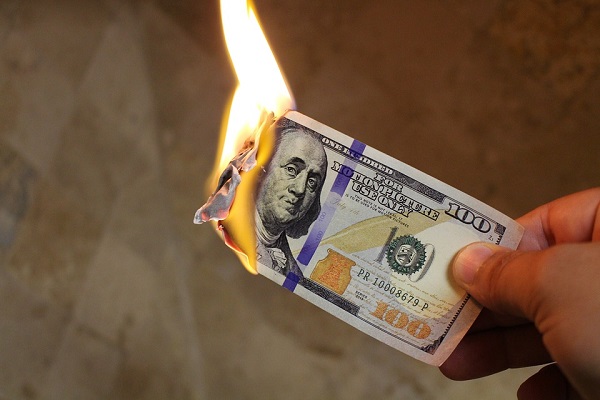 What could be dumber than spending $433B that we don’t have during an inflation crisis? Raising taxes by $739B during a recession, that’s what.

Could anything be less economically sound than doing either of those two things?  Yup!  The Dems are about to give us a real demonstration of cluelessness.  They’re about to do both of those things together — having the most negative impact on the economy achievable by mere mortal men.  And they’re going to do it while Americans are screaming that the economy is our biggest concern right now.  So are the Democrats

My money’s on “more focused on ideology.”  They know by now that November is going to be a bloodbath, and they’re doing as much as possible to “fundamentally transform” America into North Cuba with their limited time left.

This has all been enabled by Joe Manchin, who finally caved to the pressure of his fellow Democrats and agreed to support a Build Back Better light bill.  I guess he didn’t want an assassin en route to West Virginia, like what happened with Justice Kavanaugh.  But you’ve got to give the Dems points for moxie.  They’ve named the bill the Inflation Reduction Act — as if Americans won’t notice that it accomplishes the exact opposite.

The Dems are beyond excited about having a bunch more of our money to spend on their socialist schemes.  Politico is even giddy, celebrating that Biden is back.

Somehow, someway, Joe Biden is back in the game. After enduring a brutal year, Biden is suddenly on the verge of a turnaround that, the White House believes, could salvage his summer — and alter the trajectory of his presidency.

They’re saying it as if it were a good thing.  They seem to believe that Manchin surrendering to the insanity is a sign that Joe Biden is engaged and in charge again.  I guess they haven’t noticed the unintended consequences every time old Joe gets engaged in anything.  Has it occurred to Politico that “alter the trajectory” could mean throttling up, pushing the stick forward, and nose-diving into the nearest hard spot?

The bill spends $433B (that’s 433 with nine zeros behind it), of which $369B is dedicated to a quixotic attempt to change the weather.  As usual, attempts to control the climate seem to do more to increase government control over us than actually reducing the Earth’s temperature.  It’s almost as if that were the actual goal.  Luckily, the rest of that spending is to increase the size of the IRS — something that I’m sure all Americans will approve of.

Every economist without a Nobel Prize understands that spending money we don’t have devalues the dollar and increases inflation.  But even Paul Krugman now admits that the $3.1T we spent on COVID relief and infrastructure was a major contributing factor to our current inflation crisis — proving once again that even a broken clock is right twice a day.

So what should we do about that pesky inflation problem?  The Dems have decided that the only solution to overspending is to spend more, and tell everyone that it’s to buy a little inflation reduction — with money we don’t have.  Am I getting that right?

That’s not just my engineering take on the logic.  The Penn Wharton Budget Model (PWBM) projects that the bill will increase inflation for the next two years — regardless of what the bill is named.  Inflation should be peaking just about the time we go to the polls to select our next president.

But the inevitable increase in inflation that will come from the Inflation Reduction Act is only half of the bad news for Americans in the bill.

As Americans struggle with rising prices at the cash register, they will also have less money in their pockets to pay for everything.  They’re going to be facing prices that are up, while their checking accounts are down.  The Inflation Reduction Act also includes $739B (just a tad less than a trillion bucks) in tax increases — to make sure that every taxpayer has less money to live on.

Ronald Reagan, George W. Bush, and Donald Trump proved that the government can stimulate economic growth by cutting taxes.  If you let people keep more of their money, they’ll use that money to buy stuff and create economic activity.  It’s not even rocket science.

So what’s the Democrat plan to stimulate the economy?  Contrarians that they are, now that we’re in a recession, the Dems are going to get the economy humming along by…taking more money from taxpayers.  They’re using reverse WWDD (what would Donald do?) logic.  Whatever The Donald would do, they will do the opposite — because if you haven’t noticed, they don’t like the man.

We’re not talking about a trivial tax increase, either.  If we were to line up 100-dollar bills, end to end, $739B would reach from the Earth to the moon three times — and that’s just the increase in taxes.

But not to worry.  Biden assures us that nobody making under $400K per year will be affected by the new taxes.  But true to form, he lied misspoke.  Perhaps Karine Jean-Pierre will have a clarification in a few days.

A big chunk of that tax increase is in the form of a 15-percent levy on manufacturers.  But corporations don’t really pay taxes.  They collect taxes.  As their costs (including the cost of taxes) increases, they raise their prices and pass those costs on to the consumers.  Consumers will end up paying the taxes through further inflation of product prices.

Analysis by the Joint Committee on Taxation has revealed that the bill will actually impact people in every income bracket — with more than half of the taxes being paid by people making less than Joe’s promised $400K floor.  In fact, the biggest-percentage increase in taxes will be on those making less than $10K per year — well below poverty level.  It’s further proof that the Democrats are no longer the party of working-class Americans.  And don’t forget: the bill also includes an estimated 80,000 new IRS agents — to ensure that people who can’t afford tax attorneys are discouraged from finding any loopholes in the 6,550 pages of the IRS tax code.

Conservatives have been saying for years that the Democrats are out of ideas.  Could there be any better proof than the Inflation Reduction Act?