Climate Activism Has a Cult Problem 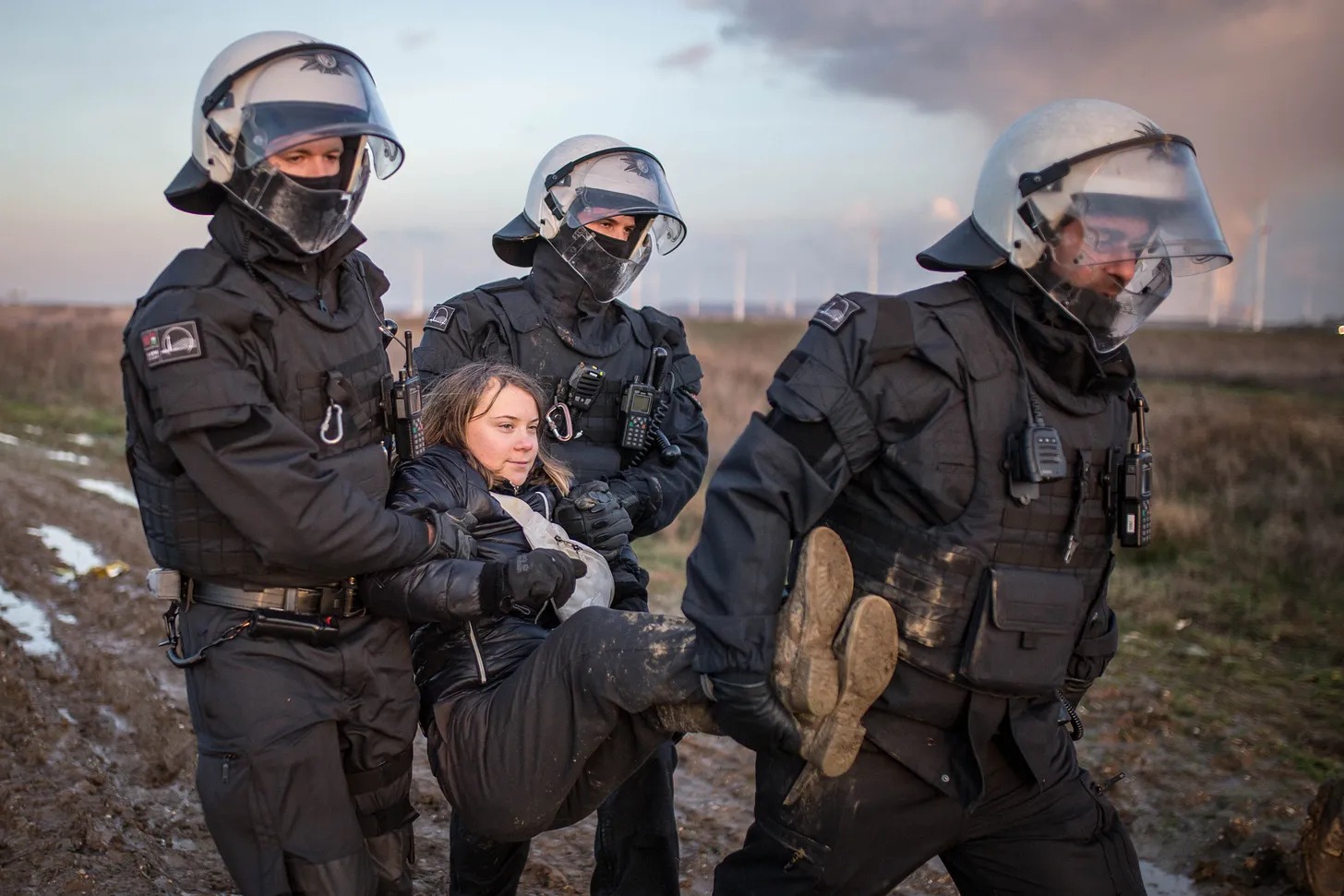 Maybe you saw Van Gogh’s “Sunflowers” smeared with two cans of tomato soup. Or the 20-year-old man who set fire to his arm at a tennis tournament, wearing a t-shirt emblazoned with the words “End UK Private Jets.” Or the traffic on London’s M25 highway blocked by protesters for days. One 24-year-old girl, Louise, climbed atop a crane on the highway. “I’m here because I don’t have a future,” she exclaimed between sobs.

All these stories feature young members of a movement that claims to fight climate change by demanding their governments stop using and producing fossil fuels immediately.

Their methods seem unorthodox, and you’re probably wondering how defacing artwork or gluing your hand to the floor of a Volkswagen showroom reduces carbon emissions. I don’t blame you.

The difference between me and you is I used to be one of them.

For the past 16 years, I was part of one environmental organization or another as an activist or paid employee. First it was Camp for Climate Action, where we protested a different corporation every year. Once, in a demonstration outside a bank in Edinburgh, we wore garbage bags and painted ourselves in molasses—a nod to the tar sands that the bank was investing in—and stormed the Royal Bank of Scotland headquarters, where I was arrested.

I became a mother in 2011, and swore off putting myself in danger, but I doubled down on my commitment to the movement. I wrote a book on ecologically minded parenting. I was the co-editor of a magazine, Juno, on the same subject. I gave talks, made television appearances, and wrote articles about the threat posed by unlivable temperatures that come from our reliance on fossil fuels.

Then, in 2018, I joined Extinction Rebellion UK, the precursor to Just Stop Oil, the group behind this recent spate of destructive direct actions.

I started out at the local level. Our group was part of the collective that took over Waterloo Bridge in London for two weeks. We packed the bridge with demonstrators and refused to leave. Extinction Rebellion, also known as XR, took over four key sites in London during that time—the largest civil obedience demonstration in decades. It got everyone buzzing.

One of the founders of XR had watched a few of my media appearances where I spoke about climate change and stargazing. She liked that I relied on data in my talks, and asked me to join the XR Media and Messaging Team. I was catapulted from being a local participant to spokesperson for the whole organization.

My days were spent writing for the national press, feeding journalists quotes and information, and editing our newspaper, The Hourglass. The people I worked with had big hearts and good intentions. Some are still my friends.

But there were red flags.

At my first XR media training, I was instructed to cry on television. “People need to see crying mothers,” Jamie Kelsey-Fry, the trainer and longtime XR activist, told me. “They need to be woken up to what they should really care about.” They asked if I’d bring my children to climate marches for the same reason. The whole thing was a masterclass on how to manipulate emotions. We were instructed to bring everything back to the climate emergency and how politicians were failing us. Nothing about solutions or science.

At the XR office in London, there was a sign that told you to keep your shoes on. Initially, I thought this was funny—a wink to our reputation as barefoot hippies—until I had to sit by people who were in fact barefoot. We had constant problems with people not cleaning up after themselves, and walking around without shoes. I remember collecting all the mugs and other dishes in the office and washing them myself so that we could have a clean environment to work in. The building’s management was always threatening to kick us out. Eventually, they did.

Another example: there was a room for healing at the office, where people could nap, meditate or get massages by volunteers. I was once called into the healing room by a friend to talk about problems in the movement. I thought this could be a productive meeting to talk about things that needed to change—for example, our focus on the end of the world—but was disappointed when we were told to pair up and share affirmations with each other. We were instructed to meditate and then connect to some higher power before sharing our feelings. There was a lot of talk about “oneness.” After about ten minutes of strange pseudoscientific practices, I left with another attendee. I wanted to fix problems, not pray.

I told myself activists can be odd birds and tried not to give it more thought. I mostly hung out with the dorkier types, like me. But over time, I realized there was something wrong, and that the guy in charge of XR, Roger Hallam, was the root of it.

Roger, 56, an organic-farmer-turned-radical, is XR’s most dominant leader. He turned to activism after his farm business in Wales collapsed—a failure he blamed on extreme weather. In 2018, Roger founded XR with several people, but his ego propelled him to the top.

When I first saw Roger in the XR office in London, I didn’t see his appeal. His wiry gray hair was unkempt, and he sat behind his desk every day eating pungent homemade hummus. I noticed he didn’t pay attention to people when they talked. That we were facing certain death was his justification (or rationalization) for being rude to everyone.

Members called him a hero, and fell for his constant self-comparisons to MLK and Gandhi. He referred to himself as a prophet, and “proved” he was a martyr through regular arrests and stints in jail.

“He’s a genius,” Joel Scott-Halkes, another spokesperson, told me. Another common refrain: “He’s the only chance we’ve got.”

Roger liked to claim that war, murder and “the rape of young women on a global scale” are just around the corner.

In 2019, he called the Holocaust “just another fuckery in human history.”

While Roger insists he’s saving the human species from Armageddon, he doesn’t do the things you need to do to prevent it—like lobbying for legislation, electing sustainability-focused politicians, or fighting for actual solutions. (The Free Press got no response from Roger Hallam after sending requests for comment via email and his website.)

That’s because Roger knows his followers—mostly young men and women—feel immense guilt about their carbon-heavy lifestyles. He preys on their guilt and their anxiety about the future. You could almost describe Roger as the leader of a cult.

For any cult to work it needs to offer salvation. Roger offers that, plus a sense of purpose and belonging to the young people who flock to him.

“I won’t live to be thirty,” youth members would tell me. I tried to convince them they would live, but they were already under Roger’s spell.

In a TedTalk, sociologist Janja Lalich identifies the key elements of a cult: “A cult is a group or movement with a shared commitment to a usually extreme ideology that is usually embodied in a charismatic leader.” Roger preached martyrdom—he pushed everyone to sacrifice more in order to “fill the jails”—and used fear and control as tools for wielding power. I’d often be asked by reporters if XR was a cult, and I’d say no. But it was.

It’s not just Roger Hallam who inspires terror and devotion among his climate-change flock. Those qualities typify the climate change movement.

Just think of Greta Thunberg, at once an archangel and a Jeremiah, telling a Davos forum in 2019: “I want you to panic.” She is also heavily influenced by XR: In 2018, at 15, she was invited to attend its first assembly, which drew more than 1,000 people to London’s Parliament Square for a “Declaration of Rebellion.” She has since amplified the message of imminent apocalypse to her 5.8 million Twitter followers and beyond, building her own cult of personality in the process.

When a movement that bills itself as compassionate and democratic seems to rely so heavily on messianic figures trading in doom and gloom, you have to ask yourself: Is this really the most ethical way to change the world?

That was when XR shut down the London Tube. I was against the action, but others targeted the Canning Town station since it had inadequate security. They didn’t care that the reason it had inadequate security was that it was underfunded because it was in a beat-up neighborhood. The people who use the Canning Town station every day are the working poor, the people who really need to get to work, the people who don’t have the luxury of working from home. I watched in horror as the news hit, showing videos of a mob pulling one activist down from atop a Tube train by his foot and kicking him.

In response to concerns about the violence, Gail Bradbrook, another XR co-founder, told me: “Disruption is what we do. This is what climate change will lead to anyway, and people need to see it.”

A few of the other spokespeople—there were six of us—refused to defend the London Tube event on TV, though some of Roger’s closest allies did. They no longer saw the need for any sort of persuasion: “We don’t need to take people along with us, Zion,” said Caspar Hughes, an older man who was likewise obsessed with Roger. “We don’t have time for that.” (Hughes was arrested this past summer after gluing himself to a copy of da Vinci’s “Last Supper.”)

The Tube disruption lost the group much-needed public support and a lot of money. It also splintered the movement.