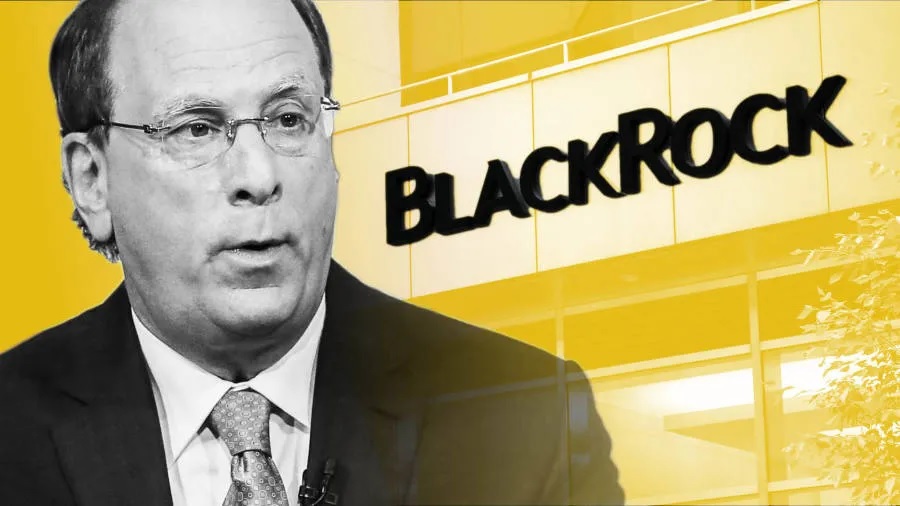 Blackrock isn’t just all about buyin’ everyone’s houses, don’t you know? In this thread, I’m going to talk about it. At my own pace.

I didn’t know how to make an image to represent this thread, so I borrowed the “for dummies” mascot, and had him pointing at black rocks.

The best way I can describe Blackrock, most immediately, is that they along with Vanguard and State Street, had “become the largest shareholder in 40% of all publicly listed firms in the United States.”

“Together, the Big Three are the largest single shareholder in almost 90% of S&P 500 firms, including Apple, Microsoft, ExxonMobil, General Electric and Coca-Cola. This is the index in which most people invest.”

The Big Three “exert the voting rights attached to these shares.”

Bloomberg called Blackrock the FOURTH BRANCH OF GOVERNMENT. We’ll get to this later in the thread, but I want the ADHD people who only read the first few tweets to absorb this point.

(I highlighted an important line in the screenshot to stress a theme) (archive.ph/0dZTe)

Translation: “Blackrock is a big economic machine that WASHINGTON LOVES! And they lean Democrat!”

Remember what I said about voting power earlier? And how that’s a concern with places like Blackrock? WELL, that talking point shows up again.

I like this cartoon because in the case of Blackrock it makes sense. Blackrock is like to the Biden administration, that Goldman Sachs was to previous White Houses.

BLACKROCK has a neat little intersection, in my opinion, with some recent on-air drama from the IMF. See this thread for more.

1/ I've followed the IMF for 15 years now, and this is the most impressed I've been by any of their live press events. Some rare truths were shared, on a panel in front of ECB President Christine Lagarde and Fed Chair Jerome Powell.🧵 (video clips below)

^^Kristalina Georgieva, new Managing Director at the IMF, “shares some hard facts, which is quite rare in itself for spokespeople from IMFS institutions. She talks about the exploding government debt levels and how the current spiking rates are putting many countries in a pinch.”


This Business Insider lists fast facts about Blackrock, but it’s really all good shit you should know about, to be honest.

So I’ll cram the article into one screenshot. (archive.ph/YzMQn)

“With 8.7 trillion in assets under management, if BlackRock Financial was a country it would be the third largest economy in the world by GDP” (archive.ph/SKq9O)

> “Vanguard and blackrock are majority shareholders in almost every national company including tesla.”

Again. THAT plus voting privileges = don’t Blackrock and Vanguard basically decide the fuck out of everything?

BLACKROCK owned/has had control over:
— CNN (at the very least until recently, via AT&T)
— NY Times
— VOX

BULLSHIT! Because yes! Yes they do! More than once! Gun rights!
Voting Laws! (archive.ph/vm1Aq) (archive.ph/iGziD)

Hey that’s an important too. So thanks!!

If you were to imagine a world where Blackrock bought EVERYONE’s homes in America, and then RENTED them back out to the public? We’re pretty much halfway there. (archive.ph/hUk6N) (archive.ph/7u2x4#selectio…) (archive.ph/SQN1g#selectio…)

THE POINT IS, reading through some of the aforementioned articles CAN EASILY LEAD ONE TO BELIEVE that the crash of 2008 and OBAMA policies…. led to the rise of Blackrock and our current FUCKED UP society.

“The CEO of BlackRock also sits on the board of Klaus Schwab’s WEF.”

Ahh yes he does.

BLACKROCK backed the climate change agenda in early 2020. This is a prominent reason why the world still talks about it….

It should strike you as weird that the agendas of so-called “activist” Greta Thunberg and BLACKROCK synced up.

Even if it was ever-so-briefly, for a moment. (archive.ph/0H2BH)

But it gets worse. “BlackRock to advise EU on environmental rules for banks”

What kind of world do we live in, if it’s one where Blackrock sets up all the rules? (archive.ph/0eGRg)

But lemme zoom in. “The European commission, the EU’s executive arm, said this week that BlackRock had beaten eight other bidders on a contract to study how the EU could best integrate environmental, social and governance (ESG) factors into its banking supervision.”

^^ Basically what I just explained is the agenda behind Blackrock DUMPING MONEY into electric car companies, SMH. (archive.ph/zPEua)

But more on that later. (archive.ph/m5fJc)

again this is how GOOBERment and Blackrock mix together, though

But Blackrock’s backing of the climate agenda, influencing the rest of the western world, is how we get CRAP like ESG. (archive.ph/fm0Vb) (archive.ph/PRFmB)

^^ I feel safe saying that Twitter’s recent ad banning decision is because of Blackrock’s influence, at this point. (cnn.com/2022/04/23/tec…)

What if I told you that Blackrock was full of shit, and playing both sides of the climate discussion?

In January 2022, Blackrock confessed to Texas all that rhetoric about “MUH CLIMATE” was hot air, and that they LOVE fossil fuels! (archive.ph/K8rKv)

In December 2020, Blackrock CEO Larry Fink WARNED that Bitcoin was a THREAT to the US dollar!…

(… But after this point? Blackrock SETS UP investments into Bitcoin! So why does the Biden admin listen to Blackrock, if they want to destabilize the USD?) (archive.ph/45uLj)

^^ People can CHEER on the fact that Blackrock opened its doors up to investments in Bitcoin futures, but there’s obviously some concerns about that kind of leverage baked into it as well. (archive.ph/yqEfs) (archive.ph/fI5H9)

(2/2021) “Possibly the most bullish news is that BlackRock, the worlds largest asset manager at $8.7T in assets under management, says that they are starting to ‘dabble’ with #Bitcoin” — via

And by 2022? THAT all led to Blackrock becoming “the primary cash reserves manager of USD Coin (USDC), a $50 billion digital asset, pegged to the value of the U.S. dollar.” (archive.ph/nOuzP) (archive.ph/8DxKv) (archive.ph/gQraa)

(2/2020) “The American Blackrock Vulture Fund threatened to withdraw thousands of homes from the rental market in France if price regulations were passed. Hours later, the yellow vests paid a visit to their headquarters in Paris” — via

Does Blackrock believe what they’re selling? no!
“ESG is not as good for investing processes as people claim,” says former BlackRock CIO of Sustainable Investing Tariq Fancy. “The reality is it doesn’t pay that much to be responsible…and none of it has any real social impact.”


Everyone loves a good peaceful protest!

(6/2021) “UMWA miners are marching in front of Warrior Mets largest stockholder BlackRock demanding a fair contract! Thank you to our Brothers and Sisters who came out for the fight! ” — via


… some Blackrock protests went beyond that, though. (archive.ph/VU0F6)

“They [were] printing money like crazy under the cover of COVID, the restrictions are there to stop the riots when the collapse happens. It’s the end of days.” — Former executive of Blackrock Edward Dowd


“Control is the goal of BlackRock CEO Larry Fink, because that control enables him to ‘force behaviors.’ His goal is to force you to comply with his woke agenda, whether you agree with it or not.” — via

^^ “Tom Donilon is chairman of the BlackRock Investment Institute and held previous positions in the Obama, Clinton and Carter administrations. His brother, Mike Donilon, is Biden’s senior adviser and was also the chief strategist on his campaign.”

“What’s the connection between the FED and Blackrock?”

^^ “The memo said Fischer will add to the company’s research, support its investment teams and speak with clients on markets, economics and central bank policy.”

So the way that the Fed and Blackrock worked together in early 2020 with bond-buying made no sense to either ME (a moron), or ANALYSTS (the smart people). (archive.ph/U0fos) (archive.ph/eyjj1) (archive.ph/vqrVi) (archive.ph/ZDk1L) (archive.ph/Q3nyB)

What you and I “normies” CAN understand is: Biden administration probably leans on Blackrock HEAVILY to call the shots.

(Almost forgot the part where Blackrock CEO Larry Fink called the Ukraine – Russia war a threat to the “world order” of “globalization.”)

(Because Larry Fink did in fact say that.) (archive.ph/p0EWS)

Bluntly speaking I think America is in an economic crisis because Blackrock (through the Biden administration) put us there.

“Hi Jay, here’s which ETFs you have to tell us to buy

Speaking of CHINA: Vanguard, State Street and BlackRock have ALL invested in places like Xinjiang companies, the region where the Uyghur people are rounded up into camps. (archive.ph/5TwxU#selectio…)

(The Evergrande fiasco was a big deal in China last year. As you can imagine, Blackrock had their hand in that.) (archive.ph/MfFsy) (archive.ph/tcw2i)

“Blackrock is pushing this big ol’ China agenda on Wall Street!… and they keep doing it even though it makes people in other sectors uncomfortable.” (archive.ph/9vZdk)

(October 2021) “Blackrock is taking your money and betting on China.” — video via

(12/2021) “Consumer Research sent a letter to 10 US governors, warning that the asset management firm Blackrock is putting US investors & national security in danger by funneling billion 💵 into Chinese market & state owned enterprises” — via

IN CONCLUSION TO THIS BLACKROCK THREAD, when Blackrock President Rob Kapito says inflation will screw over “ENTITLED GENERATION” of consumers?

🚨🚨🚨HIS COMPANY helped to put you there. It’s largely their fault, how the money flowed.