Black Thug Mocking Asian Cop as a “Ch*nk” Who Isn’t Even “From This Country” Defends His Actions by Declaring the BLM Mantra: “Black people can’t be racist” 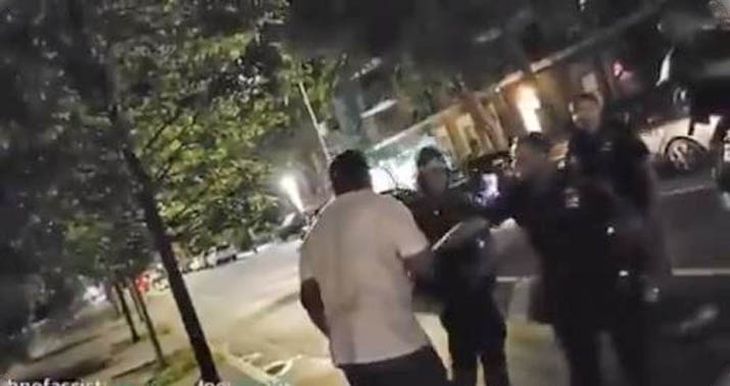 Black people can’t be racist, and therefore any nasty racism pouring from their hate-filled mouths is not racist, but “truth” in the face of “oppression.”

This is what the left not only believes, but proudly declares. And I have to tell you, large swathes of the GOPe — the pseudoright — act as if this is true, without quite having the guts and integrity to say, “Yes, we agree with the left, only whites can be racist.”

This explains how swiftly they rode to the defense of the black (leftwing) racist fired by Conde Nast, while telling Amber Athey “Go f*** yourself, white trash.”

This is not a harmless belief. Refusing to call evil for what it is, and even worse, declaring evil to be courageous and righteous, creates more evil.

Conservatives used to be very loud about saying that. But when it comes to the left’s endless justifications for racism and antisemitism among minorities, many on the pseudoright suddenly find that the cat has got their tongues.

Because they accept almost all of the left’s foundational claims.

John Sexton has been courageous and vigilant in documenting the racism of the left, even the racism of those the pseudoright agrees must be permitted to be racist. He has a good post explaining the incident.

The location [of the riot or “protest”] is Washington Square Park and one man has decided to single out an Asian cop for a tirade or abuse, repeatedly calling him a “ch**k.” The other cops try to deescalate but this guy will not be dissuaded. Apparently, verbally abusing this officer and threatening him is really important to this guy.

And then a white guy rides past on a bicycle and tells the guy to stop. “Stop talking about ch**ks, man, that’s f**ked up,” he said. He then adds that it’s racist, which it clearly is. But the guy attacking the Asian officer has a ready response for that, “Black people can’t be racist.”

He continues in his racist abuse and telling the man he’s not “even from this country.” Challenged about his racism again, he again repeats the mantra of the left, “Black people can’t be racist.”

I mean, the Multiracial White Supremacy on display here is disturbing. Almost as disturbing as an American flag.

How seriously are whites supposed to take racism when we see how unseriously other races take it?