Bitch McConnell Prepping His Last Performance of Failure Theater, As He Impotently Shrieks About the Coming End of the Filibuster (and Packing of the Courts) That He Chose Not to Prevent 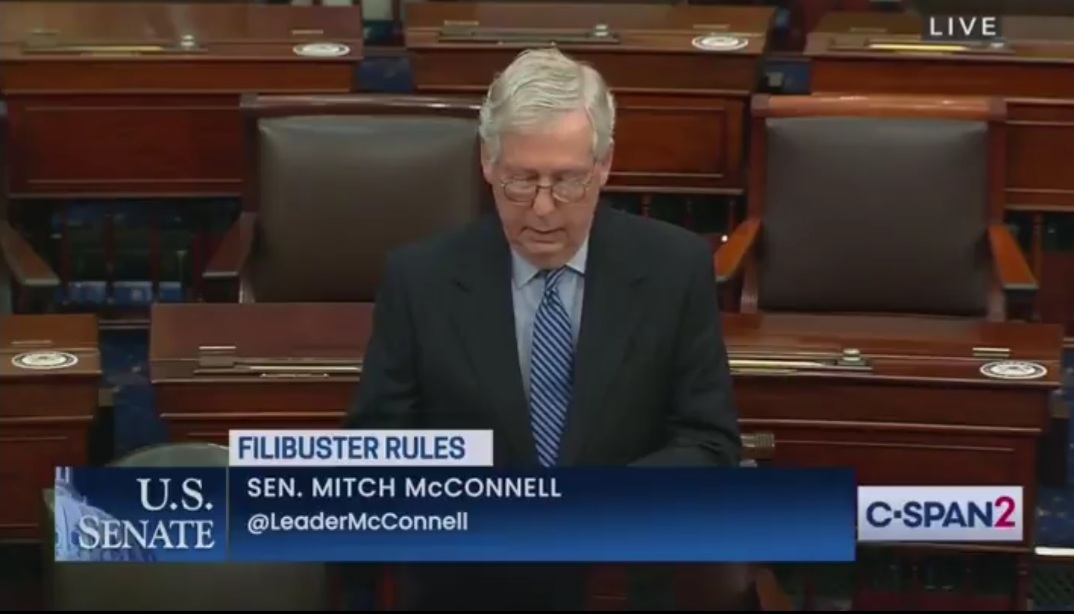 In order for a Senate to conduct business, a power-sharing rule was required, given that the Senate is split 50-50.

Bitch McConnell “demanded” the rules explicitly forbid any change to the filibuster rules.

Then Schumer — and perhaps Bitch McConnell too — arranged for Kristin Sinema and Joe Manchin to provide cover for Bitch McConnell to sign over full power to Charles Schumer, by having both of these Senators announce that they would not be interested in ending the filibuster… at the current time.

Bitch McConnell then announced he would agree to a power sharing deal which did not guarantee the preservation of the filibuster.

And he could point to the mere claimed contingent current intentions of two partisan Democrats as the reason he felt comfortable going forward with no guarantees, and not even any promises from Sinema and Manchin.

And now the Democrats are — shock of shocks! — talking about ending the filibuster.

And Bitch McConnell is playing the role he always played — as the victim of Democrat betrayals, rather than as a coconspirator in a Democrat plan to fuck over Republican voters.

And now he’s shrieking he’ll use “scorched earth” tactics if the Democrats nuke the filibuster — despite having just refused to use scorched earth tactics, or even normal bargaining leverage, in January.

Yes, Bitch, I’m sure the Democrats are plenty afraid of your impotent, insincere threats.

Unfortunately, the stupid half of the GOP base will believe this latest performance of Failure Theater, and agree that Bitch McConnell sure did do his very best to stop the ending of the filibuster, but that mean Charles Schumer just tricked him again.

McConnell on the floor this AM, in talking about the filibuster: “Nobody serving in this chamber can even begin to imagine what a completely scorched earth Senate would look like.”

Sen. Mitch McConnell on what would happen if Republicans took back the majority without a filibuster:

"We wouldn’t just erase every liberal change that hurt the country, we’d strengthen America with all kinds of conservative policies with zero —zero — input from the other side." pic.twitter.com/45DXqdAprA

There is no conservative movement while Bitch McConnell and his corrupt Ken Doll John Thune are the leader and lieutenant of the Senate “Republicans.”

I guess he should have considered the consequences before he bailed on Trump. He should have known what scumbags Democrats are and what they would do with absolute power.

If Dems end the filibuster and/or pack the courts, that’s an act of insurrection and they must be arrested.

@Nathan Blue: Mitch doesn’t get it; Democrats don’t intend for their to be any more Republicans.

@Greg: Indeed it is.