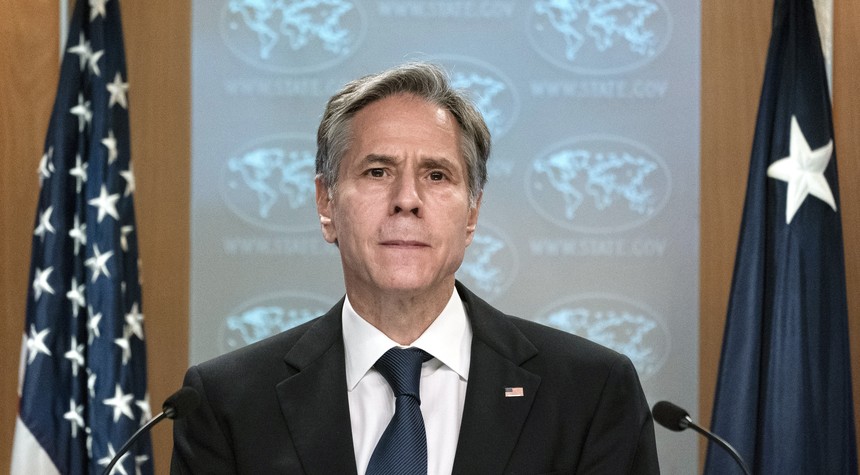 Secretary of State Antony Blinken is testifying again today before Congress about the Afghanistan debacle. Yesterday, he testified before the House and there were some fascinating questions, including one asking Blinken about being questioned by the FBI in regard to Hunter Biden.

Blinken started with a statement that once again pushed the Biden talking points about how Biden had no choice but to withdraw in the horrible messed up way that he did because he was trying to adhere to the Trump deal. But they changed the date on the deal twice, so they had already changed “the deal.” Plus the deal was conditioned on certain things that the Taliban violated so there was no obligation to adhere to it. But Biden did anyway without any conditions and without holding the Taliban to the points of the deal on their side. The Biden team refuses to talk about the horrible way they dealt with the withdrawal, just repeating over and over again: “It was time to end the war.”

But even some of the Democrats on the Senate Foreign Relations Committee have had enough of this game and want answers.

The Chair of the Committee, Sen. Bob Menendez (D-NJ), made it clear that they weren’t buying Blinken’s deflections, saying that the execution of the withdrawal was “clearly and fatally flawed,” that the Committee wanted a full explanation and there has to be “accountability.”

Democrat Senator Bob Menendez to Blinken: “Mr. Secretary, the execution of the U.S. withdrawal was clearly and fatally flawed.” pic.twitter.com/0aS2AdDlCr

Menendez said it wasn’t a question about ending the war, the issue that Biden/Blinken try to deflect to, but about how they conducted the withdrawal. “Doing the right thing in the wrong way can end up being the wrong thing,” Menendez says.

Menendez was also furious that Defense Secretary Lloyd Austin refused to testify before the Committee and threatened to subpoena him.

!! Menendez slams Lloyd Austin for refusing to appear before the cmte, saying a “full accounting” of the withdrawal is incomplete w/o him.

His refusal to appear “will affect my personal judgment on Department of Defense nominees,” Menendez says.

He threatens to subpoena Austin.

That’s a big threat and indicates how disturbed they are about all this.

There were already some hot moments today. Sen. James Risch (R-ID) asked Blinken a question that many of us have wanted asked: Basically, who is controlling Joe Biden in the White House — who is behind the button cutting him off from speaking, as we’ve seen happen multiple times already?

For more than 2 minutes at the beginning of a hearing on Afghanistan, Sen. James Risch (R-ID) presses Secretary of State Antony Blinken about “somebody in the White House” who “pushes the button” to cut off Biden mid-sentence.

Blinken tries to stammer out of it, saying that everyone knows that Biden speaks “very clearly and very deliberately for himself” — a laughable proposition, given his frequent incoherence and his inability to speak without gaffes absent notes or a teleprompter.

Here’s one example of him being cut off:

BIDEN: “Can I ask you a question?”

Blinken can’t even be honest about that.

Blinken keeps giving the same number of 100 American citizens trapped in Afghanistan, despite some Americans having gotten out, so it’s clear that’s not a real number.

Antony Blinken still does not know how many trapped US citizens in Afghanistan want to leave pic.twitter.com/PWH61ZXRgT

We can look at the deaths, the Americans and SIVs still left, and the terrorists left in strength in Afghanistan with whom we will doubtless have to deal in the future. But Sen. Marco Rubio (R-FL) nailed Blinken in response to him saying no one could anticipate the government was going to collapse, noting there was ample intelligence that “It was going to hit the fan.” Rubio further pointed out how this has created the issue of our enemies — China, Russia, and Iran — thinking they can now take advantage of this incompetence.