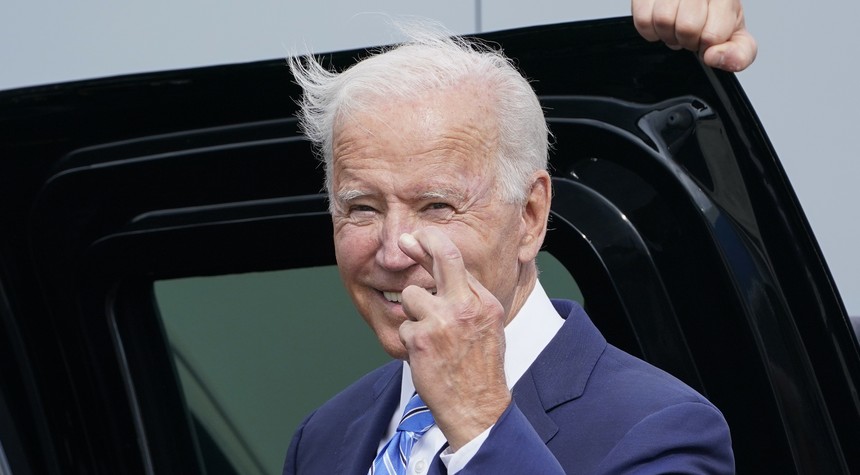 This was Biden on what he called the "African Ban" last year. Now he's imposed one himself. https://t.co/HYLrRaBpWO

We all know that travel bans are racist; Old Joe Biden told us so himself. He tweeted on February 1, 2020: “Trump further diminished the U.S. in the eyes of the world by expanding his travel ban. This new ‘African Ban,’ is designed to make it harder for black and brown people to immigrate to the United States. It’s a disgrace, and we cannot let him succeed.” Now that Biden’s handlers, possibly even including the wonk who actually composed that tweet, are in charge, all that systemic racism is being swept away, and for that we can all be grateful. Or at least we could be until Friday, when Biden’s handlers announced a plan to follow in Trump’s footsteps and ban travel from eight countries in Africa in order to fight what is being presented as a dangerous new variant of the coronavirus.

Politico reported Friday that the ban was announced “just hours after a new coronavirus variant was deemed a highly transmissible virus of concern,” and would go into effect Monday, banning travelers from South Africa, Botswana, Zimbabwe, Namibia, Lesotho, Eswatini, Mozambique and Malawi from entering the United States.” Politico noted that Biden’s handlers made this move on advice from none other than Dr. Anthony Fauci, the Left’s untarnished guru of Covid prevention.

And that makes it all right. We can learn from this that the problem with Trump’s travel bans was not that he imposed them, but why he imposed them. In February 2020, Biden lambasted Trump’s racism over the extension of the travel bans to Eritrea, Nigeria, Sudan and Tanzania, as well as Kyrgyzstan and Myanmar. This was after Trump had previously imposed travel bans upon Chad, Iran, Libya, North Korea, Somalia, Syria, Venezuela, and Yemen. Acting Homeland Security Secretary Chad Wolf explained at the time that “the countries hit by the new measures failed to meet US security and information-sharing standards.” The countries from which Trump banned travel could not or would not provide adequate information to American officials about the people who wanted to enter the country. Trump reasoned that in light of that, the risk of admitting anyone from those countries was too great. His travel bans were motivated by concern for the safety of the American people.

Biden and the Democrats, however, knew better. They knew that Trump’s expressed concern for safety was just a ploy, a fig leaf to cover his racism. They knew, or claimed to know, that Trump’s travel bans were actually motivated by “Islamophobia,” and derided it as a “Muslim Ban,” even though Tanzania, Myanmar, North Korea and Venezuela aren’t exactly Islamic Republics. Biden promised during his campaign: “On day one, I’ll end Trump’s unconstitutional Muslim ban. My administration will look like America with Muslim Americans serving at every level.” As soon as he entered the Oval Office, Biden followed through on this promise, ending Trump’s travel bans in a flurry of executive orders on January 20, 2021.

But now Biden has imposed travel bans of his own. His, however, weren’t imposed for national security reasons: every good Leftist knows that the jihad terror threat is minuscule compared to the threat from “white supremacists.” Joe Biden has told them that, too, and he wouldn’t lie to us, would he? Since the terror threat comes from MAGA-hat wearing white guys, there is no need for security-based travel restrictions.

Instead, Biden’s travel ban is meant to fight Covid. Every good Leftist knows that Covid, with its survival rate of around 97% for most age groups, is far more deadly a scourge than Islamic terrorism, and thus Old Joe’s travel ban is not like Trump’s.

“Some people learn from the past and change their positions accordingly. Other people learn nothing.” Oh… so they were wrong about travel bans being racist? Was idiot Biden wrong about the travel ban from China to try and keep COVID out (though since the CCP and WHO lied about when the virus was released, it was already here) being xenophobic? Yeah, we’ll all just hold our breath waiting for the first Democrat in history admit they were wrong.

It was racist and xenophobic for President Trump to enact a travel ban because it was against the CCP. That is bidens sugar daddy.

biden has been a racist since before he was a senator.

Yeah, and Greg expects us to believe idiot Biden views that as a “mistake” he “learned from”. No, it was typical of Democrats; invoking racism as a political weapon and opposing whatever keeps the country safe.

It’s the Biden administration that’s trying to protect the nation from COVID, and right wing idiots throwing tantrums about it.

We’ve lost more Americans to Covid under Biden than Trump, and after Biden got a vaccine.

Covid is not a pandemic, and not on the scale to justify taking our liberties and allowing an unelected one-party police state to replace our Constitutional Republic.

Biden is an unpopular, unelected buffoon installed with a rigged election that the Majority of Americans now oppose.

“It’s the Biden administration that’s trying to protect the nation from COVID” How would he be doing that? By doing the exact same thing he was doing in January of 2021? The virus is changing and the vaccines are proving ineffective against the changes. Masks are SHOWN to have no effect. Yet, this idiot moron corrupt pedophile mandates them and will fire people from their jobs if they don’t comply, no matter what their reason.

Also, he had no interest whatsoever in holding China accountable for creating this virus and unleashing it on the world. Possibly because his Mengele, Fauci, was involved in FUNDING the creation of the virus.

Yeah, we should all feel a lot safer with these self-serving cretins in control.

So leaving the Southern border wide open protects who from what? Looks like Biden hasn’t learned much. Neither have you.

Even idiot Biden has figured out that his followers are stupid and will believe anything the Ministry of Propaganda tells them.

greggie, lefties may learn from the past, but they learn so damn slow and then forget again.

It was Barrys same travel ban Trump extended but the media painted a different pic of it ,like the kids in cages using old Obama era photos. Well the kids in cages inside a softsided (tent) facility I guess are not a concern, where is AOC overcome with grief photo op?

biden is a racist.

Build Back Better will only make Bidenflation worse

Biden is Guilty of Abuse of power just like Obama its just you wont here this from the M.S. Media gutter dwellers