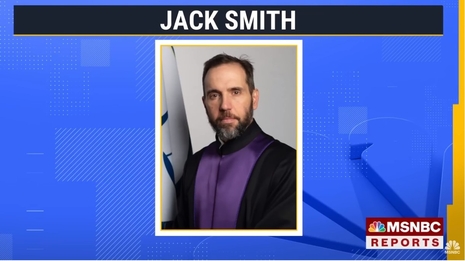 AP reporter Eric Tucker completely skipped a scandal in Smith’s interactions with IRS official Lois Lerner seeking to use the IRS to crack down on Tea Party and conservative groups.

Tucker proclaimed “Smith will presumably have to move swiftly to ensure his work concludes before the home stretch of the 2024 presidential election, given the Justice Department’s historic interest in avoiding action that could be seen as interfering in the outcome of a race.”

Attorney General Merrick Garland named Smith just three days after Trump declared his 2024 campaign, so it can already be seen as interfering in the outcome of his race.

Smith was painted as a savior for responding to Obama Attorney General Eric Holder’s request to run the Public Integrity Unit, meaning this is the second time Team Obama-Biden has picked him to be….”independent”? That’s how AP wants to play it.

Colleagues who have worked with Smith describe him as hard-charging, fast-working and passionate, a prosecutor who operates free of political persuasion and who is relentless about his cases. He displays a similar style outside court, where he is a competitive athlete who has participated in triathlons all over the world.

“He’s an exquisite lawyer and an exquisite prosecutor,” said Lanny Breuer, who led the Justice Department’s criminal division, which includes the public integrity section, at the time Smith was hired for the job. “He’s not political at all. He’s straight down the middle.”

How sweet. Former Assistant General Lanny Breuer who participated in the ATF Operation Fast and Furious coverup in the Holder Justice Department vouches for Smith as a standup guy who is “not political at all” and plays it “straight down the middle.”

The new special counsel tasked with overseeing investigations related to former President Donald Trump is a veteran prosecutor with a track record of tackling everything from war crimes to public corruption to police brutality. A look at Jack Smith: https://t.co/OuT23GMoco

Alan Tieger, a fellow war crimes prosecutor who has worked with Smith, described him as “both a guy imbued with old-fashioned ideals but who’s relentless and driven and brilliant.” He said Smith “brings that entire skill set to bear.”

Tieger is also a cheerleader in a New York Times profile of Smith: “You want an idealist and a brilliant independent thinker and a gutsy lawyer, then you got him.”

Although AP sent Smith’s IRS Lois Lerner scandal down the memory hole, it was so egregious that even CNN felt obligated to report on it.

The AP just like the rest of the M.S. Media spreading leftists Propaganda as News

Tucker proclaimed “Smith will presumably have to move swiftly to ensure his work concludes before the home stretch of the 2024 presidential election, given the Justice Department’s historic interest in avoiding action that could be seen as interfering in the outcome of a race.”

Keep in mind that when Democrats consider someone unbiased and fair, that means they will do everything they can to condemn the target of their attacks. Merrick Garland was deemed unbiased and fair and HE brings the full force of the FBI down on parents worried about what their children are being indoctrinated with in public schools.