Antifa Celebrates Trump Supporter’s Death: ‘I Am Not Sad That a F***ing Fascist Died Tonight’ 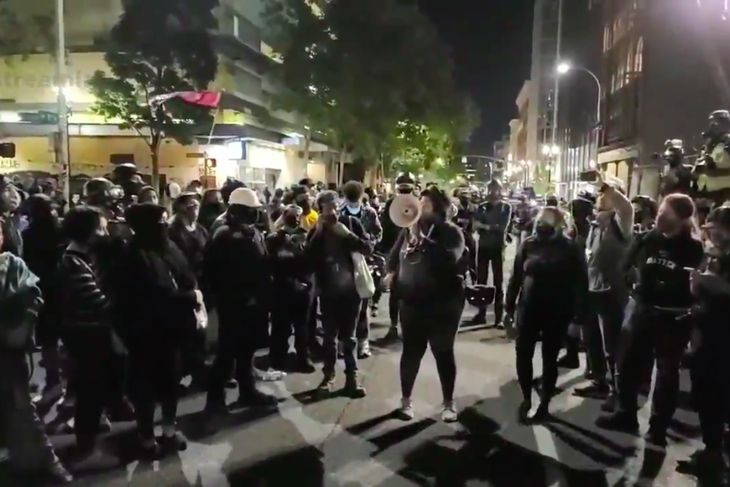 A massive caravan of about 600 trucks drove by Portland on Saturday night as supporters of President Donald Trump protested against the antifa and Black Lives Matter riots on the streets of the Emerald City. As some of the Trump supporters drove through downtown Portland, an unidentified suspect shot and killed a man likely connected to the protest. After the man’s death, antifa rioters appeared to celebrate. One woman even declared, “I am not sad that a f***ing Fascist died tonight!”

“Our community can hold its own without the police. We can take out the trash on our own!” a woman holding a bullhorn shouted at an antifa gathering.

“I am not sad that a f***ing Fascist died tonight,” she added, to loud cheers and applause.

The deceased man’s identity remains unknown, but rioters found Patriot Prayer insignia on his clothing, along with a Thin Blue Line patch. As Andy Ngo, editor-at-large at The Post Millennial, tweeted, the victim is believed to have been a Trump and Blue Lives Matter supporter.

“I am not sad that a f—ing fascist died tonight,” says a woman at the antifa gathering in downtown Portland. The crowd laughs and cheers. The ID of the deceased is not confirmed but he is believed to be a Trump & blue lives supporter. #PortlandRiots pic.twitter.com/XV6471FSuF

“And tonight, I just got word, the person who died was a Patriot Prayer truck person. He was a f***ing Nazi,” the woman added.

“He was a f—ing Nazi! Our community held its own.”

Antifa & BLM in Portland celebrate the homicide of a purported Trump supporter who was affiliated with Patriot Prayer, a Portland-area conservative group. pic.twitter.com/xjIWk0KHN2

Footage of the shooting appears to catch a man shouting, “Here, we got one over here! We got a Trump supporter here,” seconds before the gunman opens fire.

It sounds like someone is shouting, “We got a Trumper right here” just before the shots are fired and the man is killed. pic.twitter.com/MMCnp5iwtj

“Portland Police officers heard sounds of gunfire from the area of Southeast 3rd Avenue and Southwest Alder Street. They responded and located a victim with a gunshot wound to the chest. Medical responded and determined that the victim was deceased,” the Portland Police Bureau said in a statement.

Ngo noted that after antifa rioters found out “that it was a ‘blue lives matter’ supporter who was killed, antifa in Portland are very happy. They’re dancing and chanting now.”

New never before seen footage of the shooting of the Trump supporter in Portland, Oregon on August 29. pic.twitter.com/6QQzZOjWJq