Anthony Fauci, Rand Paul and Wuhan…Americans who dismissed the lab-leak theory have a conflict of interest. 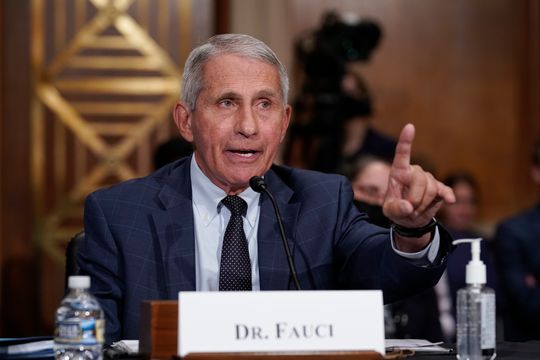 No one should expect the Chinese Communist Party to cooperate with a real inquiry into the origins of Covid-19. More disappointing is the lack of candor from American scientists and officials whose conflicts of interest deserve more scrutiny.
More than a year-and-a-half after Chinese researchers published a draft genome of Covid-19, the world still doesn’t know where the virus came from. The leading theories are an accidental lab leak or zoonotic spillover from a bat or other intermediary species.

A World Health Organization team visited Wuhan this year but Chinese officials provided little useful information. Even WHO director-general Tedros Ghebreyesus, typically a Chinese ally, criticized Beijing for a lack of transparency. He called for an audit of laboratories in Wuhan as part of the origin investigation’s next phase, but Beijing rejected the idea last week.

A senior Chinese public-health official said WHO’s plan “did not respect common sense and violated science.” The Chinese Foreign Ministry has called instead for an investigation into Fort Detrick, a U.S. military lab. A Wuhan Institute of Virology official said that his lab “did not contact, preserve or study the novel coronavirus, and it never designed, made or leaked the virus,” according to Chinese state-media. He added that there have been zero pathogen leaks or human infections since the institute opened its high-level BSL-4 lab in 2018. A Chinese official must say this or risk disappearing.
The WIV has handled coronaviruses. U.S. experts visited the lab in 2017 and 2018 and warned about a dangerous mix of subpar safety standards and infectious bat coronaviruses. In January the State Department published a fact sheet warning that several WIV researchers had been sick with Covid-like symptoms in the fall of 2019. It also noted that the group had been conducting gain-of-function research that could possibly enable viruses to infect a new species—all while collaborating with the People’s Liberation Army. And the WIV’s critical virus databases were taken offline, ostensibly for security purposes.
The U.S. knows something about the research conducted at the WIV, because American taxpayer dollars helped fund it. This was the crux of last week’s dispute between Sen. Rand Paul and Anthony Fauci, who had cast doubt on the lab-leak hypothesis in the past. In their latest bout, the Kentucky Senator accused Dr. Fauci of lying to Congress, a federal crime, when he said this year that the National Institutes of Health had never funded gain-of-function research in Wuhan. The exchange descended into shouting.

The reality is complicated. The NIH gave almost $600,000 to the WIV through a nonprofit over several years to study bat coronaviruses. Mr. Paul cited a 2017 paper from WIV researchers that included experiments combining parts of viruses to study how to better infect human cells. But Dr. Fauci said the project was “judged by qualified staff up and down the chain as not being gain-of-function.”
This might be technically true, as a 2014 federal government definition describes such research as that which “increase the ability of infectious agents to cause disease by enhancing its pathogenicity or by increasing its transmissibility.” But some scientists think the government definition is too limited and can allow de facto gain-of-function research to bypass safety protocols. Rutgers molecular biologist Richard Ebright says the NIH-funded work “was—unequivocally—gain-of-function research.”
In early 2020, Dr. Fauci emailed his deputy a paper co-written by gain-of-function pioneer Ralph Baric and a Wuhan scientist. The official responded that they would “try to determine if we have any distant ties to this work abroad.” The next day Dr. Fauci organized a call with several nongovernment virologists, but the email chain after the meeting was redacted. Weeks later, a group of scientists published a letter in The Lancet condemning “conspiracy theories suggesting that COVID-19 does not have a natural origin.” Dr. Fauci and the public-health elite echoed the letter’s views for months.
Mr. Paul, excitable as he may be, is a medical doctor who did his homework. The Senator clearly sees a political benefit in hammering Dr. Fauci and China, but the celebrity scientist and his allies have obvious conflicts of interest. The Lancet letter was organized by Peter Daszak, president of the EcoHealth Alliance, which had funneled the NIH money to the WIV.