After the Abortion Ruling, How Will the Media Decide Who’s Morally Intolerable? 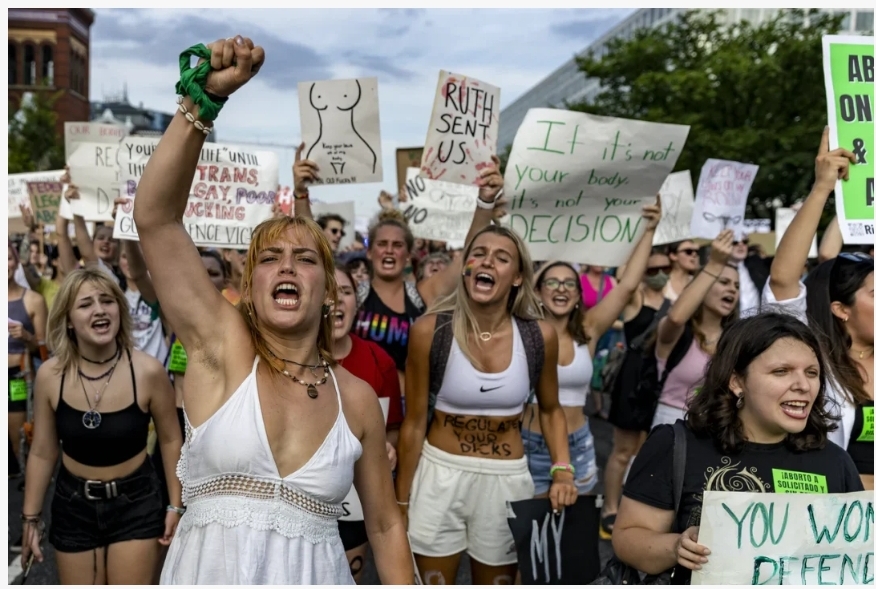 I’ll get to the “Elephant in Room” news in a moment, but I want to arrive there by a slightly roundabout route, hopefully to elucidate some other notable developments which don’t flow directly from Samuel Alito’s jurisprudence. Earlier this month, a fleeting but funny media controversy erupted: Felicia Sonmez, the Washington Post journalist whom I’d previously identified as a pioneer in the burgeoning field of “therapeutic trauma jargon,” launched her latest flamboyant Twitter crusade. This time, the spark was a mildly amusing joke about the societal prevalence of bipolar/bisexual women, retweeted by her WaPo colleague and “good friend” Dave Weigel. Sonmez apparently found this joke so intolerable, demeaning, and endangering that she felt the need to publicly demand her WaPo supervisors take swift disciplinary action against Weigel — which they subsequently did, suspending him for a month without pay. Yet Sonmez couldn’t stop there. Instead, she stayed on the attack, launching wild Twitter broadsides against additional WaPo journalists for various ancillary reasons. This lasted for around five days, and was about to spill over into the sixth, until suddenly Sonmez herself was fired. Presumably for acting so crazy that even WaPo could no longer justify pretending she was owed eternal deference on account of being a self-described “survivor.”

When I first wrote about Sonmez in March 2021, I only brought her up as the embodiment of a certain kind of prototype that had become ascendant in elite media: the Harvard-grad journalist in their 30s working for one of the most influential newspapers in the world who, despite this astronomically “privileged” pedigree, devotes their time to attaining professional advancement by constantly invoking and leveraging their purported victim status. I actually exercised a fair amount of restraint in what I wrote, and could’ve been considerably harsher given other information about her background that I’d been made privy to. Nonetheless, Sonmez accused me of “silencing trauma survivors,” by which she meant herself, with “silencing” defined as writing about her in a way that didn’t piously affirm her every pretension of righteousness. (As to how I could possibly “silence” a journalist publishing articles at the Washington Post, that wasn’t exactly clarified.)

Point being: if I’d worked for a standard media institution in March 2021 when Sonmez made that allegation about me, I most certainly would’ve been summoned on the spot into some emergency administrative tribunal. The substantive merits or demerits of what I actually wrote would’ve been irrelevant, instantly drowned out by tidal waves of internal drama. A sizable percentage of this drama would have revolved around the inevitable second-order accusation that by “silencing” Felicia, I was by extension also “silencing” (and perhaps physically endangering) my own marginalized/traumatized colleagues — not because I said or did anything to them, or even interacted with them at all, but because my mere existence as a survivor-silencing person at their media organization did them grave harm.

Thankfully I was writing here on Substack at the time and not for some perpetually-in-turmoil media outfit, so none of the above actually happened. But if you have even a smidgeon of knowledge about how media organizations operate nowadays, you know it definitely would have happened.

Fast forward to 15 months later, and Sonmez was still plugging away at the Washington Post. In the interim, she had tried and failed to sue the Washington Post for discriminating against her on the basis of her purported victim status. During this period, the main focus of her journalistic output for the Washington Post appeared to be bringing the most inflammatory possible litigation against the Washington Post. Her suit got dismissed with prejudice this past March, but there she remained, still gainfully employed, and by June still invoking her court-dismissed victim status — this time to exact retribution on colleagues for such shocking conduct as re-tweeting, and then quickly un-retweeting, a mildly amusing but forgettable joke.

As this was happening, you could tell right away that the ground was starting to shift beneath Sonmez. Even though she managed to successfully orchestrate the suspension of Weigel, the reaction among media peers to her antics was noticeably negative, and a quick consensus emerged that it was ridiculous for the Washington Post to have punished Weigel for such a trivial non-infraction. Weigel is seen across the industry, including by me, as a generally affable and inoffensive guy. He spends a lot of time traveling around the country reporting on political events, so if you’re a journalist who’s ever covered a campaign rally or a conference, there’s a good chance you’ve met him in person and found him generally agreeable. The idea that he of all people would randomly be the target of Felicia’s ferocious ire clearly rubbed journos the wrong way, and the idea that he would then be publicly flagellated by the Washington Post at Felicia’s behest was doubly risible.

Whereas a year ago Felicia could expect automated hostage-style capitulation to her increasingly crazy demands, along with tributes to her personal bravery, by this month the tide seemed to be slowly turning. Colleagues who might have been previously paralyzed into “silence” started to cautiously vocalize their aggravation with Felicia, whom they probably always privately thought of as nuts. As her spasmodic attacks against fellow WaPo journalists intensified, whatever goodwill she had retained up until that point got zapped, and she was given the boot. A subtle, but nonetheless significant shift was underway in the insular world of petty media in-group dynamics; no longer could Felicia’s purported survivorship status be indefinitely leveraged to insulate her from ramifications for her insane conduct.