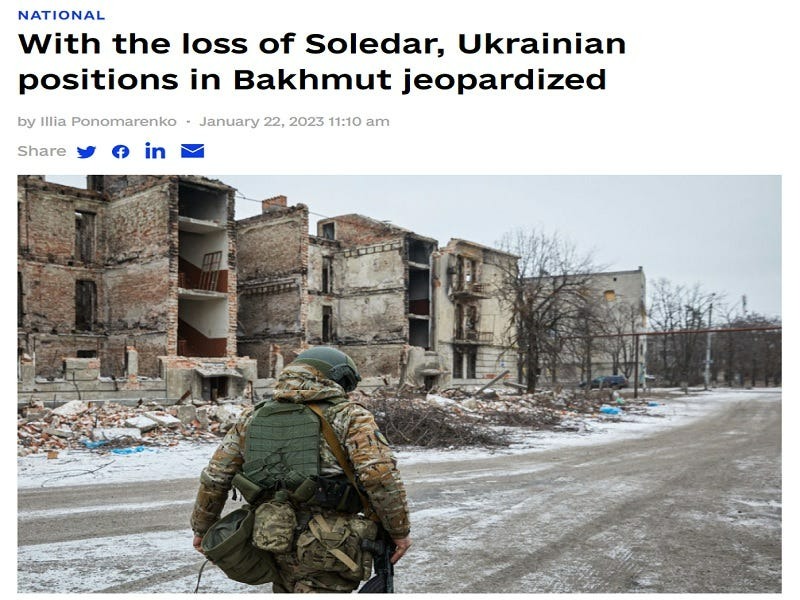 The fascist regime is infamously opaque so outside observers can’t obtain an accurate understanding of the precise socio-political dynamics, let alone the exact players, that are driving the latest trend of discrediting Zelensky’s “official narrative”. Be that as it is, by closely following the latest developments and reading between the lines, they can still conclude that there’s veritably a lot of infighting within Kiev right now. It’s unclear how long it’ll last and what the consequences might be, but there’s no longer any denying that these divisions do indeed exist.

Ilya Ponomarenko is a member of the Neo-Nazi Azov Battalion who also writes for the “Kyiv Independent”, the latter role of which has resulted in the US-led West’s Golden Billion affording him enormous attention and amplifying his articles for narrative convenience. It therefore isn’t an exaggeration to describe him as one of Ukraine’s top propagandists, which is why it’s so intriguing that he of all people just admitted that Kiev’s struggling in the Battle for Artyomovsk/”Bakhmut”.

The “official narrative” about the Ukrainian Conflict decisively shifted from one of “inevitable victory” to seriously worrying about Kiev’s ultimate loss in this proxy war as a result of last week’s events. The Polish Prime Minister, President, and Chief of Staff of its Armed Forces joined together with the US’ Chairman of the Joint Chiefs of Staff and Zelensky’s own former senior advisor to introduce this new version of events into the global information ecosystem.

It was therefore only a matter of time before one of that crumbling former Soviet Republic’s top propagandists jumped on the bandwagon as well, yet the way in which Ponomarenko did so was still unexpected. In his piece titled “With the loss of Soledar, Ukrainian positions in Bakhmut jeopardized”, he contributed to shifting the “official narrative” in his own way through the several “politically inconvenient” details contained therein.

Ponomarenko opens up by implying that Zelensky and his team are delusional after writing that “The dramatic fight for Soledar, part of the Battle of Bakhmut, is over — although Ukraine’s leadership is still reluctant to acknowledge the loss.” He then shared his assessment that “The setback also indicates long-lasting Ukrainian issues with chaotic command and control and also the lack of centralized approach and coordination in the area.”

According to him, “The lack of artillery and munitions to cope with endless and massive Russian frontal assaults has also played its role.” Later on in his article, Ponomarenko quoted Austria-based warfare expert Tom Cooper who claimed that Kiev has “no tools to literally destroy the Russians at a faster rate” and “too many troops from too many different units into a much too small area.” Apparently, “the front-line area currently has elements from nearly 15 different Ukrainian brigades.”

Ponomarenko then ends his article on a surprisingly somber note by writing that “And without well-coordinated command, the high motivation and combat experience of Ukrainian units are ‘all in vain,’ Cooper said.” Altogether, this member of the Azov Battalion contributed to decisively shifting the “official narrative” by implying that Zelensky and his team are delusional, revealing Kiev’s artillery and munitions limitations, and raising maximum awareness of his side’s chaotic command and control.

All three of these observations are unexpectedly critical of Kiev, which adds credence to the insight shared over the weekend by Zelensky’s former senior advisor Alexei Arestovich that serious infighting presently afflicts his side’s fascist regime. While Ponomarenko’s truth bombs aren’t anywhere near as powerful as the one that “Foreign Legion” spokeswoman Emese Fajk is threatening to drop, they still serve as further evidence of the infighting that Arestovich described.

After all, admitting Kiev’s struggles in the Battle for Artyomovsk is “politically inconvenient”, especially with respect to the details that he added concerning the presidential team’s delusional denial of this reality, the armed forces military limitations, and their chaotic command and control problems. Ponomarenko could have simply said that things aren’t going according to plan for whatever reason without revealing the aforesaid details, yet he consciously chose to contribute to the new narrative.