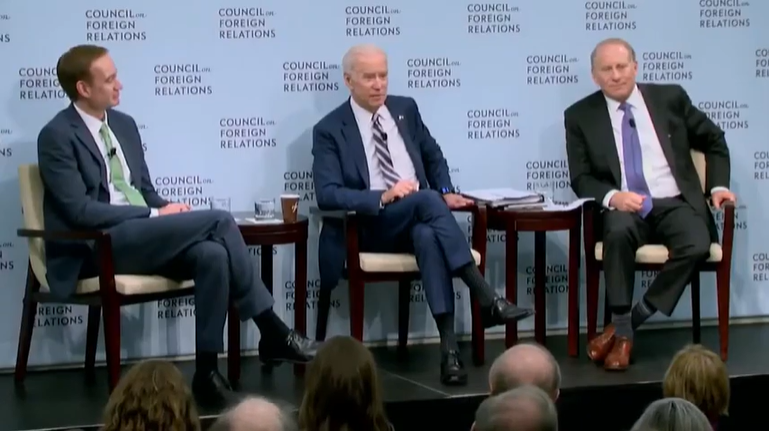 Joe Biden spent the last two weeks of his perennial vacation on the Virgin Island of St. Croix on the dime of a donor

President Joe Biden is spending his historic New Year’s tropical vacation at the property of a billionaire business owner who attended his first presidential state dinner just weeks prior.

Biden flew to St. Croix in the U.S. Virgin Islands on Tuesday with his family in the first trip by a sitting U.S. president to the region since President Harry Truman. The Biden family is staying free of charge at the house of Bill and Connie Neville, according to the New York Post. The billionaire couple who were among the 338 people in attendance at Biden’s first presidential state dinner this month with French President Emmanuel Macron.

Wasn’t the first time either

The Nevilles have supported the Bidens for years. Biden regularly vacationed in St. Croix prior to his presidency, and a White House official confirmed to the Post that the Bidens have previously stayed at the Neville residence there. The Nevilles donated more than $10,000 to Biden’s 2020 campaign and PAC, according to Federal Election Commission records, and are regular contributors of several prominent Democrats.

This is a gift (they made Trump give back all his gifts) and it’ll be interesting to see if the grifter Biden reports this on his tax returns. But there seems to be a deeper, darker motive for his trip to the Virgin Islands.

Over the New Year’s Weekend the Attorney General of the Virgin Islands, Denise George, was fired. Why she was fired is the story. She touched the third rail of politicians- Jeffrey Epstein:

A new lawsuit launched by the US Virgin Islands’ attorney general on Wednesday accuses JPMorgan Chase of ‘turning a blind eye’ to the horrific sex crimes committed by Jeffrey Epstein.

In the suit, USVI AG Denise George accuses Chase of ‘knowingly providing and pulling the levers through which recruiters and victims were paid.’ The complaint was filed in Manhattan District Court.

George goes on to allege that Chase ignored the truth surrounding Epstein, such as his 2008 conviction in Florida for procuring a child for prostitution, in order to keep him as a client, reports The New York Times.

…The new lawsuit explicitly states that Epstein used his home on Little St. James for his sex crimes. In June, Epstein’s former girlfriend Ghislaine Maxwell was sentenced to 20 years prison for trafficking minors for sex.

Epstein first became a client at Chase in 1998. There have been numerous reports since his death that the bank’s executives sought to keep Epstein on board due to his connections with some of the richest people in the world.

One section of the lawsuit reads: ‘Human trafficking was the principal business of the accounts Epstein maintained at JPMorgan.’

On Tuesday Dec 27th Biden makes landfall in St. Croix. He probably made a call to his friend Albert Bryan, the Governor of the Virgin Islands, and well, son of a b***h, Denise George was fired. If this sounds familiar, it is

It’s a recurring theme. Jeffrey Epstein had some very high-profile friends well after he was exposed as a pedophile. To this day, we haven’t seen the client list once held by Ghislane Maxwell. Seem Biden means to keep it that way.

Say what you want. I don’t doubt it for one second.

Idiot Biden has to protect all his pedo friends, including the “smartest guy he knows” (who puts loads of incriminating evidence on a laptop and forgets where he left it). If idiot Biden’s name wasn’t on the pedo guest list, he would be forcing it be released and justice served for the victims.

Yeah, let’s wait for the “media” to clamor for proof that idiot Biden declared this vacation/gift on his taxes. I don’t suggest holding your breath, though.

Where was the FBI swatting the homes of the people on the Epstein list? If Epstein is considered a pedophile would it not follow those who were regular patrons of his brothel also be considered pedophiles? Hmmm